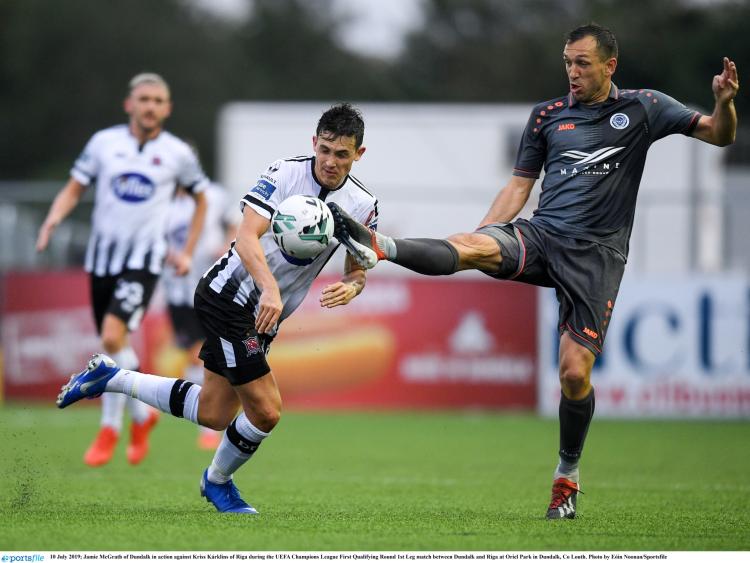 While many viewed Riga as being there for the taking and so questioned some of Dundalk FC’s attackers, the verdict must be that last Wednesday night’s scoreless encounter was, in fact, a positive outcome for The Lilywhites.

Dundalk aren’t the swashbuckling crew of 2015 and ’16, but last year’s double winners weren’t that either. Instead, they’re a more measured outfit, better at controlling games where the opposition are the ones making - or having to make - the running. And so tomorrow night’s Skonto Stadium skirmish will be tailor-made for Vinny Perth’s team to capitalise.

But the biggest positive is Riga’s lack of an away goal - a precious commodity in the world of two-legged ties where neither side are entirely familiar with one another and the stakes are so high. It’s not like the games against Rosenborg and FH, in 2017 and a season earlier, where Dundalk had to score on their travels merely to stay alive, and that glares a different emphasis on the task in waiting. One with less of a doomsday scenario hanging over it.

Though there are lessons to bear in mind, a particularly harsh one especially. This was the type of bullish attitude Stephen Kenny’s men had going into their last European away tie - the 4-0 defeat by AEK Larnaca, which followed a similarly frustrating no goal wrestle on the Carrick Road.

The Cypriots were simply a different side on their home patch. They offered something much more offensively minded and Dundalk seemingly weren’t ready for the challenges they were set to pose. That, of course, followed an opening affair where The Lilywhites had most of the play, with Larnaca, like Riga, happy to sit in and grind their way to midway parity.

On this basis, how likely is it that Mihails Konevs’ side will humble Dundalk on Wednesday night, in a fashion comparable to the manner by which Larnaca did so? The answer: very unlikely.

Although better than most ante-post punters would have suggested, their outlook pertained solely to avoiding defeat and retaining hope in the tie. Their focus will have to shift seven days onwards and it’s questionable if they’ve the ability to ‘turn it on’ as Larnaca managed last July. Albeit they’d chances at Oriel, they were reduced to ‘pot shots’ and on the one occasion where Dundalk’s defence did part, lively winger Joel Bopesu, a Frenchman, saw his control and finish let him down woefully.

In many ways, Riga are comparable to Shamrock Rovers: hard-working, defensively quite well organised, capable in midfield, but, ultimately, lacking the ability to make a breakthrough. Roman Debelko, their striker, battled to little avail at Oriel, with his touch being symptomatic of his forward colleagues on the night, quite poor.

It all looks like playing into Dundalk hands. Will Riga be as diligent defensively at home? It’s doubtful, as if they are their forward presence will, again, be of the scant variety, which doesn’t ergonomically lend itself to progression at this phase. But if they come out and play Dundalk may be afforded opportunities that weren’t there in the first leg.

Seán Gannon, who Bopesu flawlessly took watch of last week, may be the difference on the flank, or Riga right-back Armands Pētersons, who did a tremendous job on Michael Duffy, may not have the cover to execute his brief so effectively.

One imagines that a single strike would be enough to see Dundalk through, whether that be as the game’s victor or on the away goals’ ruling.

The tempo of the affair lifted when Robbie Benson was introduced at Oriel and it is likely that he will be given a starting nod in Riga. He was, of course, outstanding in last season’s away triumph against Levadia Tallinn. Elsewhere, Andy Boyle’s second half display was top drawer. On two occasions his calls led to Debelko being traced in an offside position, which gave the backline a much sterner look.

Hoare and his fellow Dubliner would be a formidable pairing for this game, with Dane Massey looking a more complete left-back option at Dean Jarvis’ expense.

Who replaces Shields in midfield, if the warrior fails to make it? Hoare possibly, alongside Benson, or, if especially adventurous, Seán Murray or Patrick McEleney. Perth has to cast the judgement.

With the misery of Larnaca at the forefront of thought, Dundalk should score and that, one would assume, would be enough to propel them through. But that was the belief ahead of the Cypriot conquest, so caution should be spread.