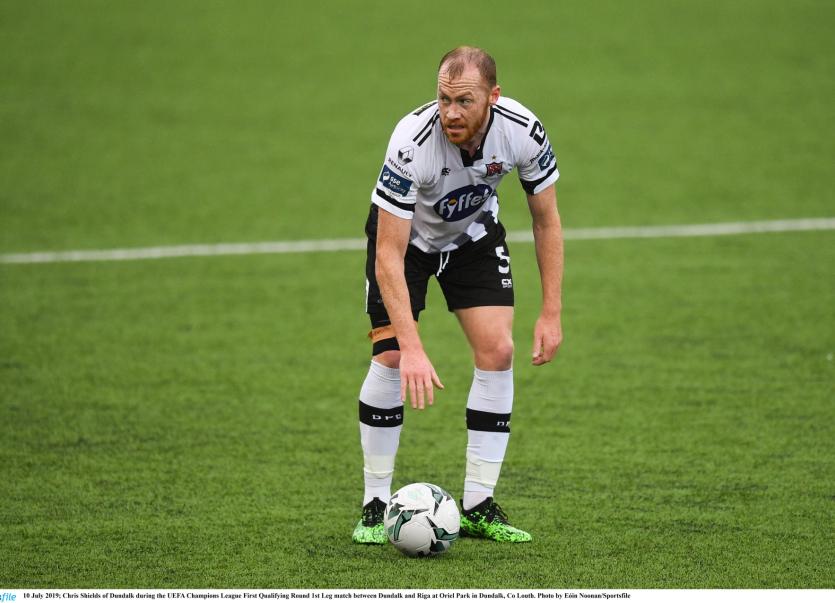 Chris Shields will be fit to face Riga in Dundalk’s FC UEFA Champions League first qualifying round decider in the Latvian capital on Wednesday, but his recovery presents Vinny Perth with a headache of his own as the Lilywhites look to smash the €1 million barrier.

Shields was involved in a costly collision with centre-half Daniel Cleary after a miscommunication between the pair late in the opening half of last Wednesday’s scoreless first leg at Oriel Park.

The 28-year-old midfielder suffered a nasty facial injury and as a result was forced off at the break. He was sent for a precautionary X-ray the following day, but has been given the all-clear for the return clash.

Andy Boyle replaced Shields at half-time, with Seán Hoare switched to a midfield role. Boyle’s performance from the bench could now leave Hoare’s or Cleary’s place in jeopardy, with the once-capped Republic of Ireland defender expected to start.

Midfielder Robbie Benson also impressed as a substitute, meaning head coach Perth could be left with a difficult decision to pick between Jamie McGrath and Patrick McEleney for the No.10 slot in his starting XI.

Dundalk – who jetted out to Latvia on Monday – are already guaranteed €800,000 from their European participation this season. That would rise to €1.2 million if they can see off Riga and progress to the second qualifying round, where a daunting journey to either Azerbaijan or Albania awaits.