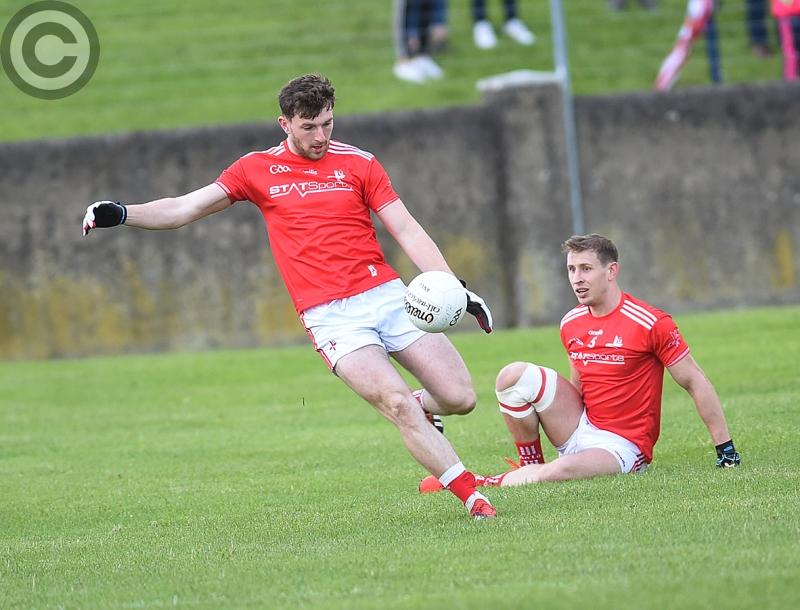 Louth forward Sam Mulroy delivers the ball as Anthony Williams gets back to his feet during Saturday's All-Ireland SFC qualifier humbling by Antrim in Drogheda. (Pic: Arthur Kinahan)

So, the couple of hundred Louth supporters in Portlaoise a few Sundays ago thought it couldn’t get any worse? It could, you know, and it did – at Drogheda on Saturday last.

The All-Ireland qualifier with Antrim was meant to see the Reds take a tiny step on the road to redemption after the 26-point walloping by Dublin. Antrim had also taken a first round championship whacking, theirs from the Tyrone team beaten by Dublin in last’s All-Ireland final.

But whereas Louth had gone into the championship on the back of a decent Division Three league campaign, only narrowly failing to win promotion, Antrim couldn’t find an exit from the bottom tier. Louth’s spring form had a much superior look to it.

It counted for nothing at The Gaelic Grounds, however. Having at one stage in the opening half led by six points, Louth went down by 2-16 to 1-11 . Do the maths and you’ll find there was a 14-point turnaround. Defeats haven’t come as damaging as this one since the 3-21 to 0-7 rout by Tipperary, four years ago.

Indiscipline, which threatened to wreck league hopes early on but was addressed and corrected, returned to rear its ugly head. But by the time Fergal Sheekey and Declan Byrne were dismissed, the game had already turned in Antrim’s favour.

Wayne Kierans was honest enough to admit afterwards if the game had been close at the time, the two reds would have tilted it in Antrim’s favour anyway.

Add to Saturday’s result all that’s been happening with other county teams in recent weeks and you have a major contribution to the county’s current very low standing. The minors have shipped three heavy defeats, the juniors, while faring better than the others, are also out of the championship, and to see just how poor it’s been for the U20s, look elsewhere in this issue for the result from Saturday’s game with Derry at Ardee.

Another thing Kierans said on Saturday was that “all stakeholders (will) have to come together and try to map out a future for Louth football”. Too true, because if it doesn’t happen, things will get even worse, if that’s possible.

There’s a lot that’s in need of serious repair, in particular schools’ football and the underage structure. It’s there where the work has to begin and be properly conducted, providing a strong basis for the senior players of tomorrow. All the evidence available suggests it could be much better in this county.

A County Board meeting was scheduled for tomorrow night (Monday), giving clubs the opportunity to ask some pertinent questions. If they didn’t, they failed in their duty.

There’s one question which this column has asked many times in the past - why has the plan drawn up a few years ago by a committee headed by St. Kevin’s David Rogers never been fully implemented? A special Board meeting was supposed to be held to give the plan full discussion, but it never happened; it’s a surprise the committee members, who put long hours into its construction, never pursued the matter.

When Wayne Kierans talks of stakeholders he might only have county team selectors and Board officers in mind, maybe players as well. But there are others who would regard themselves as stakeholders. For instance, the hundreds who braved winter conditions at Drogheda on Saturday and before that made the journey to Portlaoise’s O’Moore Park.

If there’s ever to be a gathering to discuss where the county is going and what needs to be done to raise its status, it’s imperative supporters are given a seat at the table. Aye, and others who might have something to contribute. The goods closed shops have to sell are worthless.