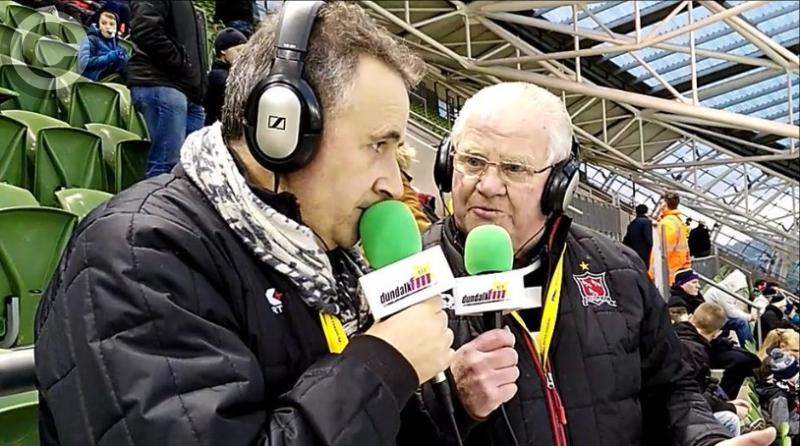 Patrick Hoban was first of all a villain and then a hero in Dundalk’s crucial league win over Bohemians last Monday night. Georgie Kelly filled the same two roles, but went in the opposite direction.

Well, that’s how it came across in the Dundalk FM commentary. John Murphy and Gussie Hearty were behind the mics and, as always, both played a wicker, better than most of the Lilywhites did in the opening half. The game could end in a home team drubbing, but there’d still be enough from the lads, especially John, to give you a chuckle. His Murphyisms are earning legendary status.

It went like this the other night: Bohs take an early lead and there is concern in the commentary box. It becomes more acute as the first half progresses; with the score remaining 1-0 at the break, there is the usual question: “What can we do?”

There isn’t total agreement among the boys on how things can be improved, but both think Hoban isn’t having a good game. John is adamant: “We’ll have to get down the flanks and get those crosses in.”

The second half and John tells us Hoban “is not at the meeting”. Then when Dundalk’s record goalscorer tries a bicycle-kick and fails miserably to execute it, we hear, “the two wheels were punctured”.

Just as the old Dundalk greyhound track – which wasn’t foreign territory to either of the boys – had a Missioners’ Bend, the one closest to the Redemptorist Monastery, and the Newmarket course where the English Guineas are run has The Dip, Oriel Park has its own landmark. The number of times John mentions the Sing Li Corner would surely gladden the heart of whoever operates this food outlet.

Kelly (Georgie) for Kelly (Daniel) after 56 minutes. The boys are in agreement, “He had to do something”, ‘he’ being V Perth, the man tasked with filling the boots of S Kenny. Ten minutes later, Georgie Boy grabs the equaliser.

“Ya ho, ya boy ya” - John at the top of his voice. He would repeat it several more times, the first after referee Tomney at last punishes Bohs’ goalie Talbot for time-wasting. He doesn’t say it when Bohs’ Ryan Graydon, just 13 minutes on the field, is sent off; but must be finding it difficult to contain himself.

Talbot goes down. “He’s no more injured than I am,” says John, and then adds: “All I have is a broken heart.” And later: “They should present him (Talbot) with the ball – he made love to it all night.” And even later: “Goalie (Talbot, who else?) takes his time – he’s only on the second decade of the Rosary.”

Gussie wants to know “what’s going on here” as Bohs slow down the play. And then when Andy Lyons also hits the deck: “There’s not a bother on him. It was harmless (the foul by the Dundalk player).”

Kelly passes up a couple of great chances to add to his score. The game’s in time-added-on, and it’s odds-on Dundalk dropping two valuable points. Then, Dean Jarvis is upended in the box. Cue for another JM trademark roar.

Who’s going to take it? Hoban’s recent game record from the spot isn’t good. But the Galwegian’s game. Back of the net. John changes things slightly: “Get in there, ya boy ya”.

More from Dundalk’s answer to Tyler and Neville on Friday night, taking in Dundalk’s match with St. Patrick’s, but Inside Track had to pass this one up.