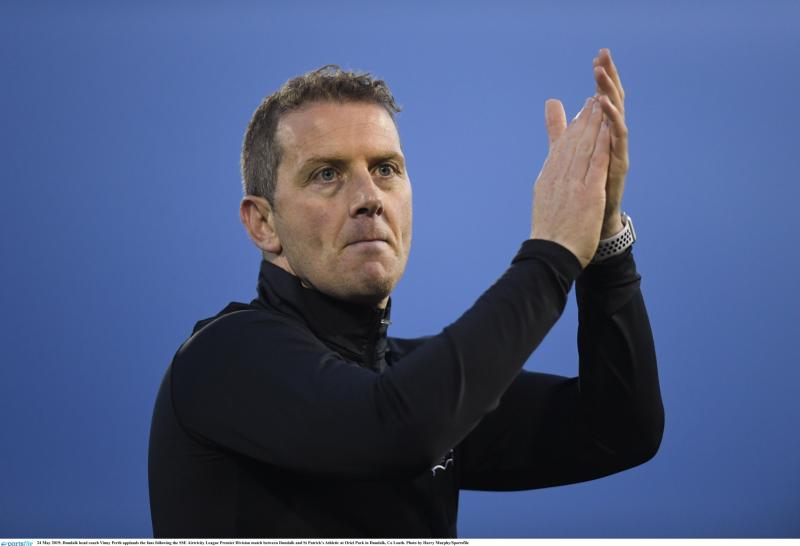 Dundalk FC head coach Vinny Perth has his side at the top of the SSE Airtricity League Premier Division. (Pic: Sportsfile)

‘Vinny Time’ – that was how one former Dundalk FC player put it in the aftermath of yet another dramatic late twist at Oriel Park last Friday night, and the man in charge believes timewasting tactics have “come back to haunt” the opposition.

Bohemians had attempted to play down the clock from very early on the previous Monday, and conceded a penalty in the fourth of six added minutes, to finally succumb to Dundalk’s heavy pressure.

St. Patrick’s Athletic, too, had tried to be clever with delaying time as they looked to bag a precious point against the reigning champions. They were also undone late in the day, in the most unfortunate of circumstances as a 90th-minute clearance cannoned off Seán Hoare and into the top corner.

However, Perth believes all three teams involved got what they deserved in the end.

“We have scored two late goals in the last two games, but I don’t think anyone can say we haven’t deserved to win those two games,” the head coach said, in his immediate reaction to Friday’s valuable victory.

“We were good to the game tonight – there was a bit of time-wasting going on at different stages, and in the last two games that has come back to haunt the opposition a little bit.

“But full credit to Pat’s. They’re a good side; they’re on their way back in terms of they had a little blip. This is a difficult league and everybody is going to make it difficult for each other. When teams come to Oriel, they’re going to sit in and make it difficult for you. You get nights like tonight where it just doesn’t happen – luckily, it worked out in the end.”

Perth is of the opinion that the latest testing schedule has led to tired teams, with last Friday’s match one of the least entertaining seen at the Carrick Road in recent times.

“The number of matches – Friday, Monday, Friday, Monday – has taken away from the quality of games,” he said. “We just played a titanic struggle. We have been away to Cork, Bohs here, and now Pat’s who made it really difficult with a back five again.

“They probably didn’t go for it as much because they only played on Tuesday night. It was a really difficult game for both teams. I don’t think the way we’re managing the fixture list is conducive to free-flowing football. Pat’s are a footballing side and they probably sat in tonight more than they would normally. We weren’t at our freshest tonight.

“But at the same time, we just keep going, keep going. We created a lot of chances and had a lot of possession. Georgie Kelly was really unlucky with his header. I believe we deserved the win, but that’s taking nothing away from St. Pat’s.”