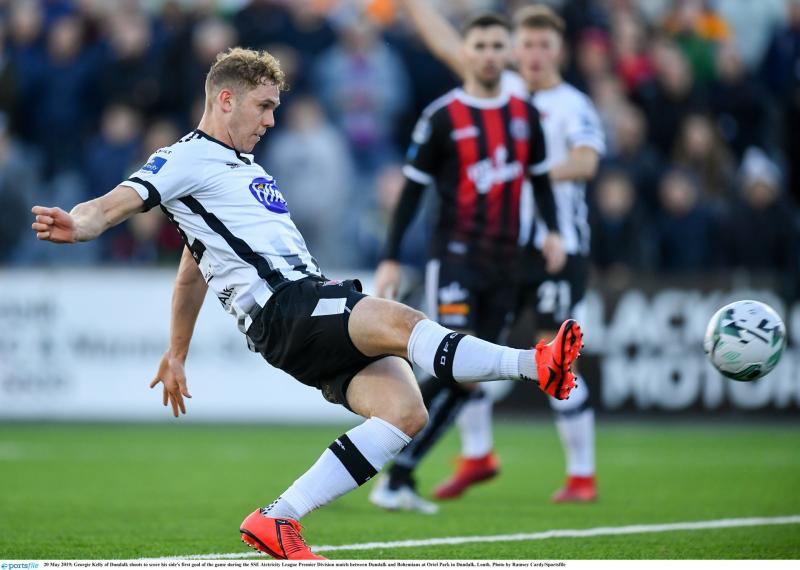 Patrick Hoban hammered in a 96th-minute penalty to keep Dundalk FC top of the SSE Airtricity League Premier Division in yet another dramatic finish against Bohemians, whose 10 men looked certain to frustrate the reigning champions at Oriel Park.

Dundalk were stunned inside two minutes when their defence was split open, with Danny Grant finishing well from a difficult angle after rounding Gary Rogers.

Michael Duffy should have got them back on level terms on the quarter-hour, but he struck wide, in an out-of-sorts first-half performance.

Seán Gannon was doing his best down the right side to lift Dundalk, but it was his mistake that should have been punished before half-time when Ryan Swan was gifted possession, only to fire wide.

Bohs were down to ten men on 54 minutes when substitute Ryan Graydon was dismissed after two quick cautions. Gypsies goalkeeper James Talbot then produced heroics to deny Georgie Kelly as Dundalk cranked up the pressure.

And that finally told midway through the half when Kelly rattled in from close range midway. The game looked over when Hoban and Daniel Cleary were denied late on, but deep into injury-time, substitute Dean Jarvis won a penalty and Hoban converted. 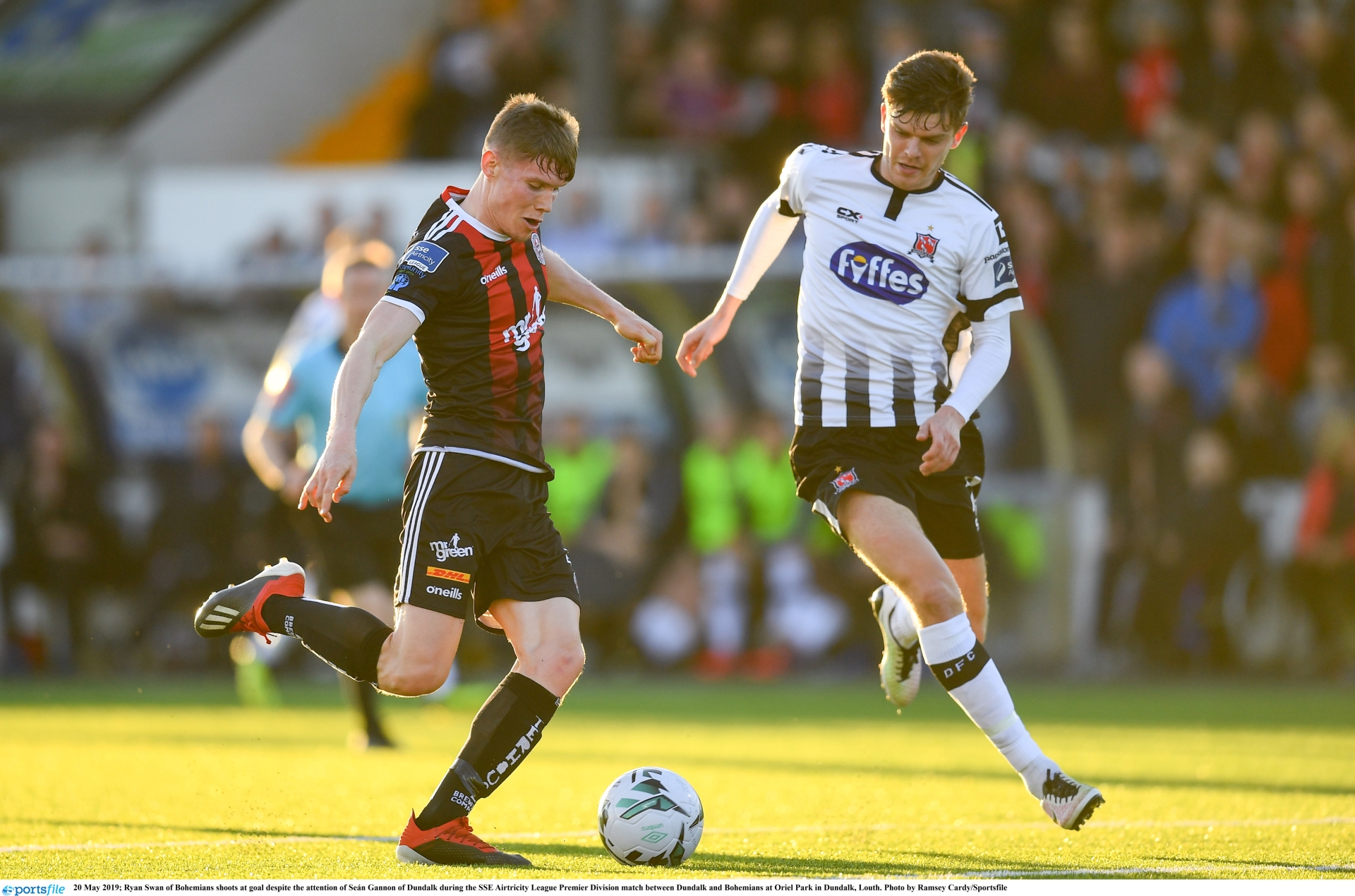 Dundalk head coach Vinny Perth had freshened up his team after a swift 72-hour turnaround from Friday’s win in Cork.

Seán Hoare was back from a ban and was included along with Dane Massey, Jordan Flores and Daniel Kelly. The latter was replacing John Mountney, who was sent-off at Turners’ Cross, while Brian Gartland, Seán Murray and Jarvis were among the substitutes.

Bohs were without the experience of right-back Derek Pender as well as top scorer Dinny Corcoran, as Keith Long’s side looked to end a winless streak stretching three games.

They set about their task and were ahead within two minutes. It came from a Dundalk attack where Patrick McEleney looked threatening but his pass for Flores was cut out. That allowed Bohs to break through an open midfield and a defence-splitting ball was latched onto by Grant, who raced around Rogers and finished from a tight angle.

The hosts were stunned, but they almost levelled on six minutes when Gannon found Daniel Kelly in the area, only for Talbot to produce a smart save as he directed the shot over.

The equaliser should have arrived on the quarter-hour when McEleney controlled beautifully and put Duffy in the clear on the left of the box, but the winger surprisingly failed to hit the target. 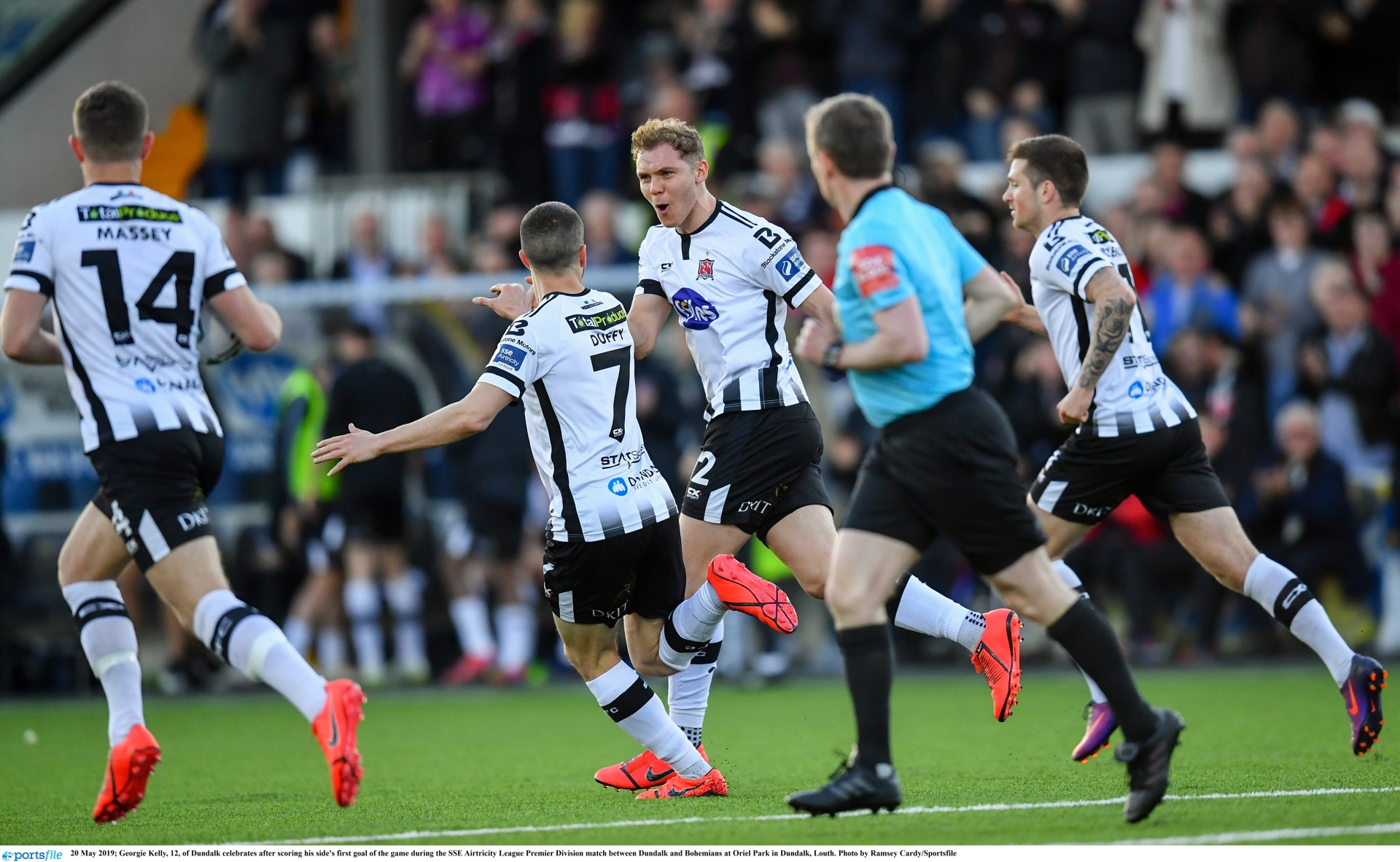 Dundalk clearly needed that to go in, as they remained off-colour in a poor first-half showing. A chance did present itself from a set-piece, but Cleary got under his header after a pinpoint Flores corner.

That had come shortly after Danny Mandroiu had an effort deflected wide for Bohs. The Dubliners were almost gifted a second on the stroke of half-time after a rare slip-up from Gannon, with the defender relieved to see Swan fluff his lines with just Rogers to beat.

On 49 minutes, Flores delivered another excellent corner but, again at the back post, Cleary could not hit the target.

Bohs were then reduced to ten men when Graydon – who had only come on in the 41st minute – was sent for an early shower after collecting two yellow cards.

The Gypsies had Talbot to thank on the hour-mark. Flores was taken out on the edge of the box but the referee allowed an advantage, with Duffy crossing for substitute Kelly but he was denied by a stunning Talbot block.

Talbot then saved a Kelly header after he connected with a Massey cross. But Kelly deservedly got on the score-sheet on 66 minutes when a Duffy corner fell into his lap just six-yards out and he made no mistake.

Dundalk went all-out for the winner but when Hoban, by a fine Talbot save, and Cleary, by an Andy Lyons goal-line clearance, were denied in the 88th minute, it seemed the winner would not arrive.

However, as had happened last month against Bohs, Dundalk won an injury-time penalty after Jarvis was taken down.

Hoban kept his cool with another last-gasp spot-kick to keep Dundalk at the summit of the table as they stretched their unbeaten league run to nine matches, after Shamrock Rovers’ easy win at Finn Harps.