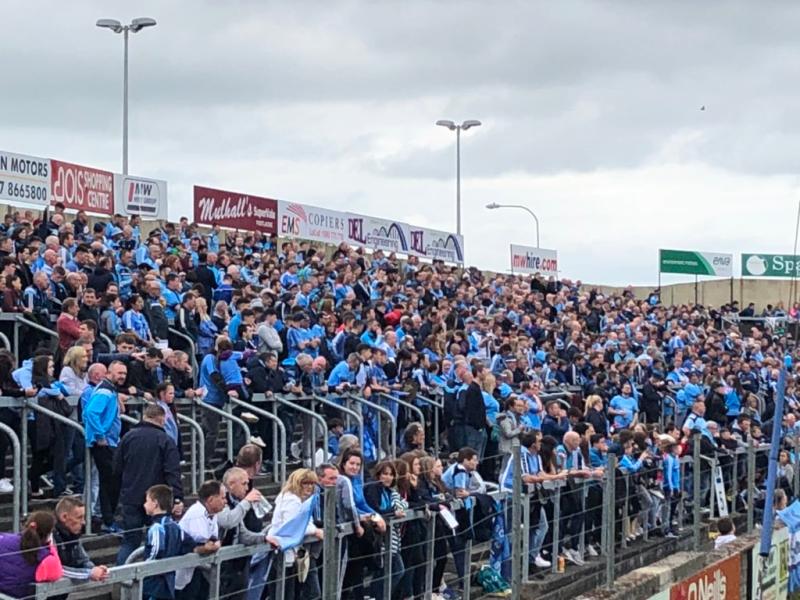 The vast Dublin crowd stand behind the goals at O'Moore Park, Portlaoise, before last night's game against Louth.

If Louth were going to be beaten here, a quick, mercy kill would have been the ideal outcome. Had Dublin blazed in a few early goals, instead of Fergal Sheekey repeatedly intervening, it may have been easier to watch. Hardly, but just maybe.

As it turned out, the Reds’ demise was slow and as painful as imaginable. Like killing a chicken by starting with feather-pulling, as opposed to just twisting the head and getting it over with. It wasn’t so much that the relatively even start garnered belief of anything but the inevitable - a defeat - though it did at least provide hope that a massacre would be avoided. Isn’t it, just, the hope that kills you.

Jim Gavin's All-Ireland champions led 1-12 to four at half-time, nine of the Sky Blues’ points coming from the boot of their prolific free-taker, Costello, who finished with 1-12. Louth’s naivety in the tackle and conversion failures at the other end became an increasingly nasty cocktail.

One national media member commented that “Louth were poor” at half-time, before the humiliation really began to unfold, and the Wee County’s boss, Wayne Kierans, conceded to the assertion after the match.

“I wanted the situation to be: they’re an awesome outfit, but we did x, y and z right - but we didn’t and that’s the annoying thing,” he said.

“It wasn’t the score that would determine whether it was reasonable or not. We always knew it was going to be a tall order to beat them on the scoreboard, but we have to look at our own situation and decide whether we performed or not and did we show any quality.

“Unfortunately, we showed very little quality and it’s certainly not through a lack of effort.”

Of course, Dublin played from the 25th minute less Paul Mannion, who was directly dismissed for a woeful, head-high stoppage of Conall McKeever, which left the Clan na Gael man stricken on the turf.

It led to Kierans mildly contemplating an even higher margin of defeat.

“I don’t think it could have gone any worse… maybe if they had to have 15 men!”

Bevan Duffy isn’t normally one to be outdone in the physical stakes, but even the Louth captain was awestruck by Dublin’s conditioning.

This, in truth, brings the debate back to the root cause of the issues. The GAA have nurtured a monster in the capital that they can no longer control, which leaves inter-county football teetering on the brink as opposed to standing stationary at a crossroad, as some parties with vested interest would have you believe.

The Dublin players looked like rugby professionals in their warm-up, the definition of their muscled-toned bodies being in stark contrast to anything those following Louth have witnessed, perhaps ever. They simply won’t be stopped, this year, next or the year after that again.

But while the race for Sam Maguire is now a mockery, Duffy insists his team have made progress this season in spite of this Portlaoise pummeling.

“Physically they’re miles ahead; their clinical, decision-making in front of goal, it’s an experience I’m not going to forget,” the St. Fechin’s man surmised.

“We’ve progressed well this year, this is obviously an eye-opening experience that makes you sit back and think… but we just have to get back at it, today doesn’t really matter (overall), we have progressed.”

For the wry-analysis subscribers, there is something to take from an otherwise chastening experience. Louth, and Ryan Burns, hit the first and last of the game’s scores, but, in between, Dublin fired 5-21 to the Wee County’s eight points.

His opener was from play in Louth’s first attack, but their next point was 18 minutes in waiting, by which time Dublin had struck seven on the bounce and forced Sheekey into two wonderful saves.

On the flipside, Dublin registered just one wide in 40 minutes - and that was a goal chance blazed off target by Niall Scully. Clinical simply doesn’t do the Dubs justice, or Costello, who missed just one free throughout and even then he scored the rebound.

“They’re supreme athletes, but the fact that they’re so in-tune with what they’re doing; their processes, as they would call them, are just so far down the line,” Kierans added.

“They obviously watched us through the league and put us under pressure in the areas that we were good at. They went after our kick-outs straight away and we found it difficult to win any of our medium-to-long kick-outs.”

Dublin’s first goal was of the fortuitous flavour, a loose ball rebounding into the net off of Con O’Callaghan amid a myriad of sprawling bodies who had rushed towards the goalmouth. An outbreak of panic doing little to aid Louth’s clearing mission.

Brian Fenton scored Dublin’s second major four minutes into the second half, after another pair of Costello frees, as Louth were made to wait until the 47th minute to open their account after the break, when Jim McEneaney chipped over, as the runaway train gathered momentum.

At that stage, the Reds trailed 2-15 to five points and the gap grew to 19 when substitute Michael Darragh McAuley palmed home Dublin’s third goal.

There was a brief Louth rally, which brought their tally to eight, but only in between two further Dublin majors - Costello shooting home minutes prior to another reserve, Philly McMahon, picking his spot in the bottom corner.

Twenty-six points separated the sides at the finish. Simply nightmarish.