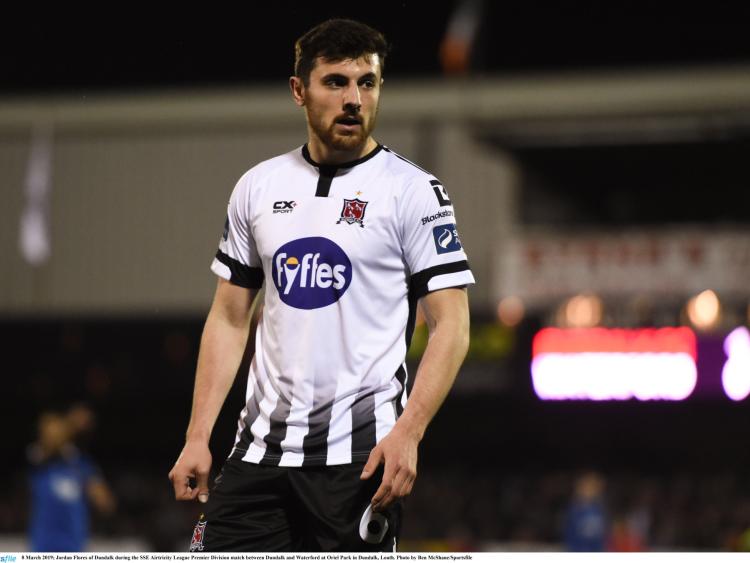 Dundalk FC midfielder Jordan Flores claims his team have yet to “hit our stride” despite a 4-0 demolition of Waterford on Friday night, where he set about putting his own career back on track after a nightmare 17 months.

Flores was one of the players referenced in Vinny Perth’s post-match comments where the head coach admitted the champions have been forced to throw in new players quicker than they would have liked.

The 23-year-old has not played a full 90 minutes since suffering serious injuries in a two-car head-on collision in October 2017. There had been high hopes for him at Wigan Athletic, but struggling to walk after that horror crash, it has taken him time to get back on his feet.

But Dundalk supporters will have been hugely encouraged by his display, in an unfamiliar position on the left, against Waterford, as he stepped up to the plate to help the depleted Lilywhites to an important three points. And Flores believes the game-time he gained will give him a solid platform.

“I’ve not played regular football for quite a while now. That 75 minutes will be massive going into the next few weeks,” Jordan said, before adding: “I think with every game there’s more to come – you’re never going to have the perfect game. We’re only five games in, so we’re all improving as they go by. Hopefully, we will hit our stride very soon.

“I’m settling in well here. The boys are class. There is a lot of quality in the group, on and off the pitch. We’re a very close bunch. I’m enjoying it.”

Perth was forced to rejig his team at the weekend as star winger Michael Duffy became the latest player on the treatment table.

“Missing a player of Michael’s quality is always going to be difficult,” Flores admitted. “There were a few boys playing out of position – myself, Seán Hoare – but as you seen with the performance, we adapted well. It was very good. We needed a performance like that where we were getting goals and a clean-sheet. We’ll enjoy the win, but our focus now goes on to the next game.”

Despite the scoreline, Waterford had more possession than an away team would normally have at Oriel Park. Flores felt that was just the way the game developed and he was full of praise for his team-mates as they “really dug in” to claim a first home clean sheet this year, with their aim now to build on an unbeaten start.

The Wigan native said: “I think that is just how the game goes. We want possession as much as we can. You can see that in the games we’ve played this season. But the game can go a different way. The lads really dug in defensively to keep the clean sheet.

“It was a good win. It will give us a lot of confidence. Every single win builds the confidence in the team. We have to go again – we’ll work hard in training and build on what we’ve got, after a good point at Rovers and now a win.”