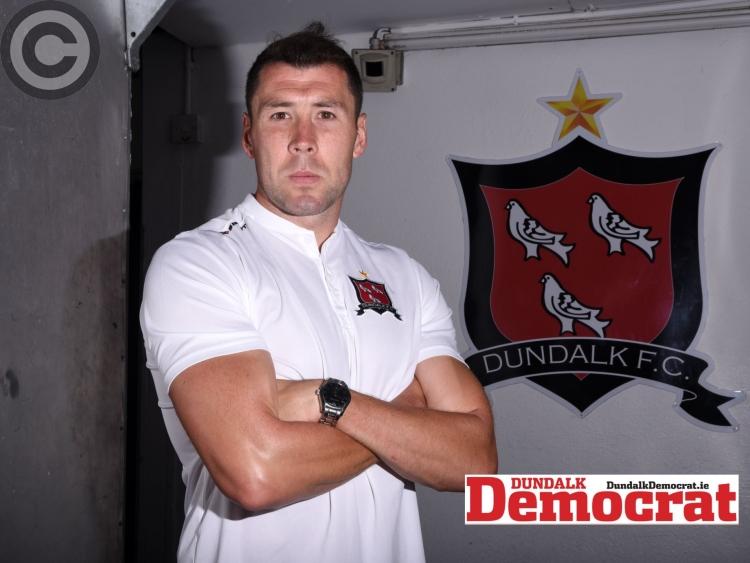 Brian Gartland signed for Dundalk FC from Portadown midway through Stephen Kenny’s first season in charge, and it’s proven to be the most inspired of decisions.

Five years later, with a pocket full of winners’ medals, the Dubliner is settled locally, having married into the well-known O’Brien clan.

“I’d nearly consider myself (a local),” the centre-half quips.

“I was chatting to a couple of the older supporters the other day and I was saying to the lads on the team, when I retire, you better be in Europe and doing things like this because I want to be on the trips as a fan and have this experience as a fan after I finish playing.

“This is my club now. I’ve bought a house and I have a wife; I’m lucky to have joined a great family up here so I feel completely part of it and for me, that’s why I get such a buzz when we get to occasions like this.”

Our conversation wraps up as Sean O’Mahony’s return to the field for the second half of Saturday’s Louth Senior Football Championship encounter with Ardee, St. Mary’s.

His brother-in-law, John, one of the best Louth players of his generation, remains a vital cog in the O’Mahony’s line-up and after we’ve finished, Brian returns to his standing berth under the scoreboard at Páirc Clan na Gael, where his wife, Bronagh, and her other brother, Pat jnr., amongst others, are watching the action unfold.

A picture of Gartland flipping burgers at the club’s Golf Classic did the rounds on Friday.

It’s put to him that Pat snr., who is standing like the expecting father along the sideline, has been telling people that after years of having a son playing for Louth, he’s now got “a young lad” playing for Dundalk.

“I wasn’t there when John was playing and Louth were flying, but I can imagine what they were like in the house” Brian says with a grin.

“With Pat, I don’t know if he was up in Oriel ever before. He gets a bit of stick, but he gives it as well. It’s good to have,”
Pat’s expected to be in attendance on Thursday night when AEK Larnaca visit for their Europa League qualifier.

In contrast to the previous round win over Levadia Tallinn, this match has the Lilywhites at home first. Nonetheless, the defender’s outlook is positive. There’ll be no ‘just staying in the tie’ sentiments ahead of the second leg.

“Staying in the tie is definitely not something that we think of. That’s not how we operate and how we go into it. We’re not playing Real Madrid or Man United, we’re playing teams that we think we’re capable of competing against and capable of beating and going through.

“But I say that without arrogance because we know we can’t underestimate them. We know we’re in a tie, but we’ve full belief in ourselves and we’re not going in to stay in any games. We’re going in to win games.”