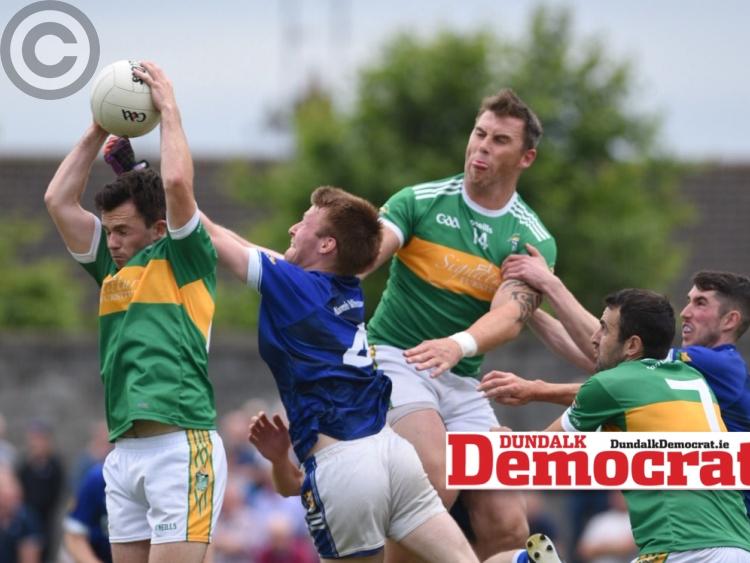 It seems Sean O'Mahony's could find their way out of a room with no doors. And if they couldn't, Conor Crawley would probably just bulldoze an exit. Ten down against St. Mary's at Páirc Clan na Gael, a 13 point turnaround swung Saturday's enthralling encounter in their favour, keeping their Joe Ward dream alive.

The mountainous full-forward must be the Ardee side's dormitory demon. For the third year running, he has used his large frame to bustle his way through bodies and bury the royal blues' championship hopes. For the third year running, St. Mary's have tasted an agonising championship loss to the Point Road juggernaut. How they went down here, well, they may never truly know.

A run of three goals in four minutes towards the end of the opening half had them cruising, leading 3-7 to 0-6. Ronan Carroll finished two free-flowing moves past Kevin Brennan before Dáire McConnon lacerated the O'Mahony's defence for major three.

But, typically, O'Mahony's fought back and exploited that long-standing soft centre of St. Mary's. They nibbled at the deficit in the lead into half-time and gained a lifeline when Stephen Kilcoyne, who was a herculean figure in his team's time of most need, found the net as the interval bell sounded.

The diminutive livewire scored 1-3 in the first half, but, him apart, O'Mahony's looked almost out of their depth as St. Mary's pounded them like a heavyweight would a featherweight. Conor Gillespie (0-3) and Paudy Clarke (0-2) scored at their leisure, whilst Carroll was an effective focal point.

Their goals came between the 25th and 28th minutes and had them leading by double-figures. But still they went to the dressing room with a somewhat unsatisfactory buffer, ahead by just four; 3-7 to 1-9.

The first major turning point was Conor Finnegan's goal. It typified the lackadaisicalness of Seán Barry's troops in the second half; as they stood daydreaming after having a close-in free awarded against them, Finnegan picked his spot in the bottom corner of the net. The gap stood at just one.

They responded, kind of, and bridged the lead to two thrice as the contest moved in a point-for-point direction. Chris O'Neill was then sent-off for a second bookable offence and O'Mahonys' goose looked cooked.

But, drawing from their renowned parochial spirit, they summoned one last incredible surge. A long ball deflected off the upright and simmered for a while before Crawley wound up his fist and boxed the dropping size five past Alan McGauley.

Suddenly, after Finnegan (free) and Kilcoyne had pointed, Ardee were three in arrears as time ticked into red numbers. A siege was launched on the dressing room goal, but the Deesiders could find no way through.

Substitute RJ Callaghan was dismissed for an off the ball incident in injury-time; it was a striking act borne out of the type of frustration that only O'Mahony's seem to muster in oppositions.

The better team overall lost the game of the championship, not that the Quay men care.