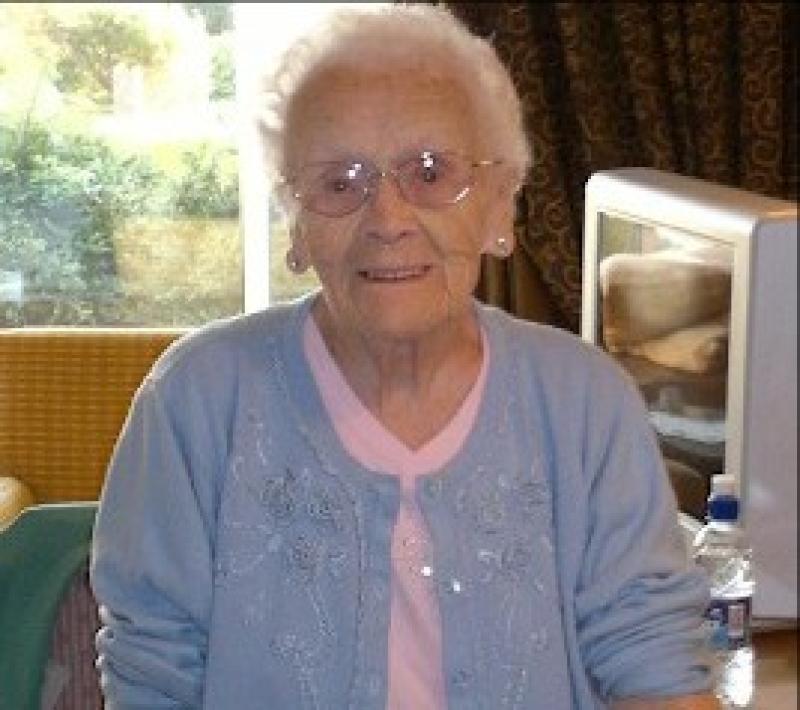 Bridie O’Byrne, 58 Fatima Court, Dundalk, who has passed away in her 99th year, enjoyed a long and active life.

She was a real people person who enjoyed being part of whatever was going on around her.

Bridie died on June 1 2018 in our Lady of Lourdes Hospital, Drogheda, having resided for the previous eight months in Dealgan Nursing Home.

Originally from Castletowncooley, she was the youngest of four children of Pat and Mary (nee Harkin) Rooney, and the last surviving member of her family.

Her brother, Jack, was tragically killed following a loyalist car bomb in Crowe Street, Dundalk on December 19, 1975, an attack which also claimed the life of Hughie Watters and injured 20 people.

Bridie’s father worked as a driver for the county council, while her mother was a dressmaker.

She attended school in Cooley until the age of seven and half when the family moved to a house on Grayacre Road, Dundalk, at the back of Cuchullain’s Castle.

She continued her schooling at Hamill’s house in Fatima where the Saint Joseph’s Church is located, and from there went on to Castletown Girls School.

Bridie worked in Rawson’s and Halliday’s shoe factories and remained in employment for a spell following her marriage to John O’Byrne in 1949.

She also worked for a good number of years in Ecco subsequently.

John was a train driver from Saint Malachy’s Villas.

They resided for a time above McKeown’s Pub in Church Street, beside McCann’s bakery before moving to Fatima in 1952, the first people to live in their house there.

Bridie and John, who passed away in 2001, had five children, Liam, Mary, Seán, Gerard and Pat.

An outgoing lady, she loved being in the middle of everything and getting up to sing when the occasion demanded.

Bridie was a member of all clubs open to her and looked forward to going on tours with the clubs around the country.

Her aunt, her mother’s sister, was a member of Cumann na mBan, and this significantly influenced Bridie, who often stayed with her aunt in Roscommon, where her mother was from.

A supporter of Sinn Féin, Bridie was a regular at party meetings and even when becoming less mobile would be collected so that she could attend.

Aged 98 at the time of her death, she was looking forward to reaching 100 and believed President Higgins would deliver her letter himself!

Longevity, it seemed, ran in the family. Her brother, Tom and sister, Molly, were both 90 when they died.

She had a cousin in Upstate New York who lived to be 105 and an aunt, also in America, who was 99 when she passed away.

Bridie joined the art class As soon as she took up residence in Dealgan Nursing Home. Teacher Carol Quinn was very impressed by her talent.

Bridie completed three paintings before she died, much to the surprise of her family.

She was predeceased by her brothers, Jack and Tom, sister, Molly and husband, John.

After reposing at Quinn’s Funeral Home and the family home her remains were removed to Saint Joseph’s Church, Castletown for funeral Mass.

Readings were by Liam and Pat, while Gerard gave a fitting eulogy.

At the end of Mass her great-granddaughter, Tegan Reddan read a poem.