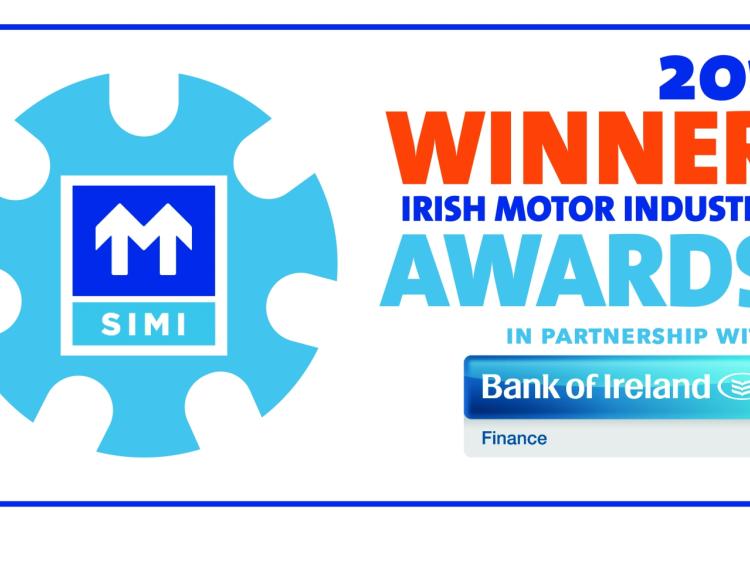 The SIMI Irish Motor Industry Awards in partnership with sponsor Bank of Ireland Finance were held last night at a glittering ceremony at the Clayton Hotel, Dublin 4. The awards now in their seventh year were attended by over 700 of the Motor Industry’s senior figures and guests.

The accolades adjudicated by an independent panel and announced by RTE Sports Commentator & TV presenter Marty Morrissey, honoured those companies that demonstrate excellence and best practice in their Industry over the last 12 months. Open to all sectors of the Irish Motor Industry eight award categories in total were presented by Alan Greene President of the Society of the Irish Motor Industry (SIMI) and Pat Creed, Managing Director of Sponsors Bank of Ireland Finance.

Prior to the awards announcement, SIMI President Alan Greene addressed the audience remarking that the night was a celebration of the 41,000 people who contribute to the growth of the Irish economy. Last year the Industry collected €1.5 Billion from new and used car sales alone for the exchequer, while in excess of €5.5 Billion was generated by the Motorist.

Acknowledging that car sales are an obvious barometer to measure the impact of Brexit, the effect of which is likely to be felt right across the industry. Mr Greene noted that members across the various sectors are being faced with changing market dynamics this year, while this will be challenging it will also present opportunities.

The SIMI President identified the issues of Road Safety, Insurance and the Environment as being hugely important to the Motor industry. He commended the ongoing work of the Road Safety Authority, offering the Industry’s support to work closely on Road Safety initiatives. Mr Greene recognised that the Industry itself had a role to play in educating motorists on the importance of maintaining their car, particularly in light of the fact that over 750,000 cars fail their NCT test each year. Commenting on rising insurance costs he expressed his concern on the increase in uninsured drivers, while also acknowledging the recent work of the Oireachtas Committee and the 'Cost of Insurance Working Group'. He hoped that their recommendations to be implemented over the next two years will deliver fairer premiums for consumers and businesses. On the Environment the President remarked “there is no doubt that we all need to be concerned about the impact of emissions on health, but we need to seek for holistic solutions that seek to maintain the benefits of lower CO2 with a reduction in the other harmful emissions.”

In closing the President praised the companies who were shortlisted in each of the Motor Industry award categories and underlined that the awards are a great way for SIMI to acknowledge the diverse and dynamic nature of our Industry as a whole.

Pat Creed Managing Director of Bank of Ireland Finance comments “Bank of Ireland Finance is delighted to be in partnership with the Society of the Irish Motor Industry for the third consecutive year to recognise outstanding achievement and excellence within the Industry. BIF is the leading provider of funding to the Irish Motor Industry through tied relationships with 14 Manufacturers/Distributors which account for in excess of 50% of the total Industry. He also commented that with Brexit looming and the significant increase in used car imports from the UK & NI which was evidenced in 2016, the industry needed to maintain increased focus at a time when we are just recovering from the worst recession in many years.”