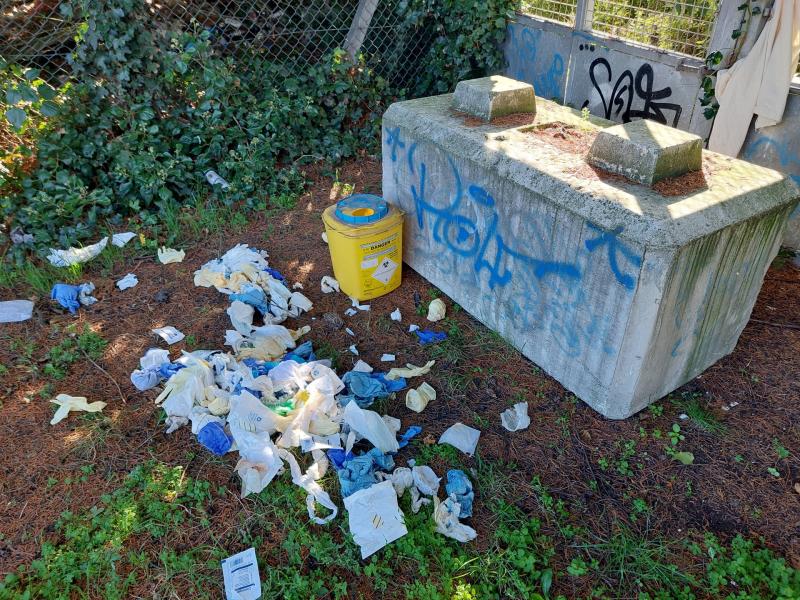 A container of 'contaminated sharps' and other medical waste found dumped in Dundalk. Photo - Tadgh McNally

An array of medical waste was dumped on the Ramparts Road in Dundalk overnight, with a box labelled “contaminated sharps” among them.

The waste, which was left on the Ramparts Road, appeared overnight with an assortment of medical rubbish being left, as well as a contaminated sharps container with the label reading "clinical waste" and "infectious substance".

A majority of the waste was medical gloves, alongside tissue paper.

Speaking on the dumped waste, Sinn Féin Cllr for Dundalk South Kevin Meenan said that it was concerning that medical waste was dumped in the area, and that he hoped that this wouldn’t represent a pattern of dumping moving forward.

“I would be very concerned about that kind of dumping, that it could be potentially very dangerous, also for the people who have to respond and pick it up as well,” said Cllr Meenan.

“Hopefully it’s not a pattern like we’ve seen in the past where there has been a pattern of dumping, whether its sofas on certain roads or tyres in certain areas."

A major concern for Cllr Meenan was the location it was dumped, saying it was close by to a number of schools.

“If you think about it, it’s not far from a number of schools, so you have a highly-populated area with lots of people walking about, so I’d be very concerned.

“I’ll be talking to the council to see have they got to the bottom of where it came from.”

Independent Cllr Maeve Yore told the Democrat that the “environmental terrorists” who dump the contaminated waste need to be prosecuted, named and shamed.

“It’s scandalous that this and the previous government has not addressed and resolved the GDPR issues and environmental terrorists like these who dump this highly toxic and contaminated waste are not prosecuted and named and shamed,” said Cllr Yore.

“In my opinion, this country’s outdated laws support the criminals, not the victims and need to change - taxpayers end up footing the bill and I for one am fed up of it.”

As of 4pm this afternoon, the waste has been removed.

ALERT: People in Dundalk warned over scam calls and text messages about Dole or PUP payments