The Breakaways concert in Blackrock was roaring success 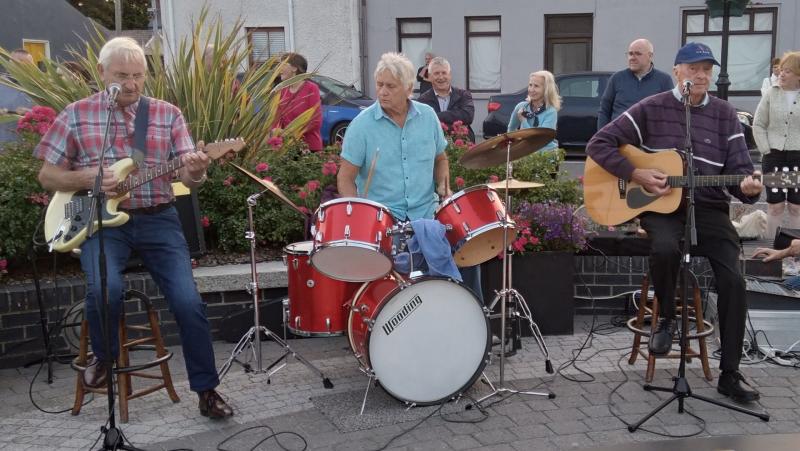 The Breakaways playing in Blackrock

The Breakaways concert at Blackrock Sundial last Friday evening was a great success.

The legendary Blackrock trio were supported by the Clann McCaul School of Irish Dancing as well as the Castlebellingham Ukulele Orchestra and was one of the most uplifting events staged in the seaside village in recent years.

Following the series of lockdowns due to the Covid pandemic over the last year and a half, local peoppe were only too glad to take up the invitation to the concert and eagerly gathered along the promenade and sundial for the show.

The weather was absolutely ideal and the Breakaways, Pat Breen on lead vocals and rhythm guitar, Eamon Cooney on harmony vocals and lead guitar and Paul Steeples on drums, opened the evening with a rousing half hour set.

The three lads hadn't played together since March 2019, but you would never have known this as they immediately clicked into gear under band leader Eamon Cooney's direction and played a stirring opening set.

The Clann McCaul School of Irish Dancing, who are open for enrollment for new volunteers from 4.00 pm to 6.00 pm each Thursday evening at Rock Celtic's Clubrooms, demonstrated the wonderful training and tuition their members have already received when these youngsters gave an exhibition of their skills.

Next up were the Castlebellingham Ukulele Orchestra, whose eclectic rendition of a whole series of pop classics thrilled the packed crowd. Featuring Eamon McKevitt's virtuoso lead picking, the twenty member vocal and rhythm section's versions of The Beatles 'Octopus's Garden' and The Waterboys' 'Fisherman's Blues' were particularly effective.

The Breakaways then played far into the evening, Pat Breen's extraordinary tenor voice soaring around the village's Main Street as Eamon Cooney and Paul Steeples drove the group on and led the crowd's collective singing and dancing in a stirring climax to the evening's proceedings.

Music has the capability to render one bleary eyed with nostalgia and many members of the audience were visibly moved by hearing the group perform once again.

Indeed it was a concert, which given the extraordinarily difficult times the area has endured throughout the coronavirus pandemic, seemed like an impossibility several months ago.

The show has already been made available via facebook to former parishioners in the United States, and across Britain and parts of Europe and has received rave reviews and will live long in the memories of all who attended.

With the world's refugee problem worsening each day, an added feel-good factor was the extraordinary response by locals to the raffle on the night, which contributed the sum of €1,320 towards the construction of a new orphanage in Ghana which will be erected by Conor Hughes's Cross Cause Charity.

All of the artists who performed have already received the highest praise from the grateful community and it would be entirely fitting if the members of The Breakaways, three of Blackrock's favourite sons who have given their entire adult lives to entertaining their parishioners and selflessly fundraising for a whole myriad of charitable causes, should be the recipients a lifetime achievement award for their services to the greater community.