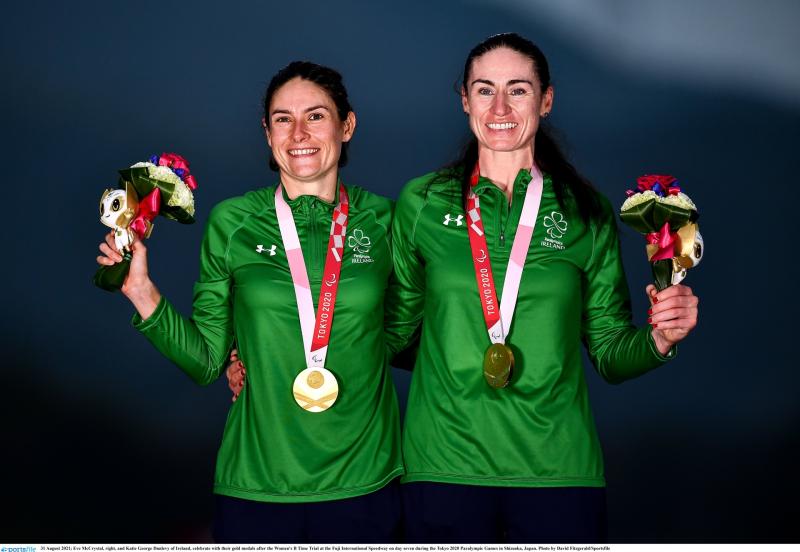 Dundalk cyclist Eve McCrystal and her racing partner Katie-George Dunlevy have won gold at the Tokyo 2020 Paralympics in the Women's B Time Trial.

The two racers came in to win the gold with a time of 47:32.07 at the Fuji International Speedway in Tokyo.

The duo add the gold to their silver medal that they won during the B 3,000m individual pursuit last Saturday.

#ParaCycling #Gold for Katie-George Dunlevy and Eve McCrystal in the Women's B Time Trial with a time of 47:32.07 ⏱️

The two racers beat Britains Lora Fachie and Corrine Hall, who came second with a time of 48:32.06.

Speaking to RTÉ Sport after the race, McCrystal said that once they were five seconds ahead after the first lap, they didn't want to give that up.

"We went for it, and I think after the first lap we were five seconds up," said McCrystal.

"I think we're better ahead than chasing, so I just said in my head 'I'm not letting this go now', so we just went for it.

"I just think we're after doing the ride of our lives, I can't believe it."

Dunlevy said that she could feel that the duo were up to win it before the race, saying that she really wanted to take home the gold medal.

"I could feel it actually before we went, I was saying 'we're gonna win this'," said Dunlevy.

"I really wanted it."

"To come away and retain our title is just what we've been working towards for the last five years, so it means the world."