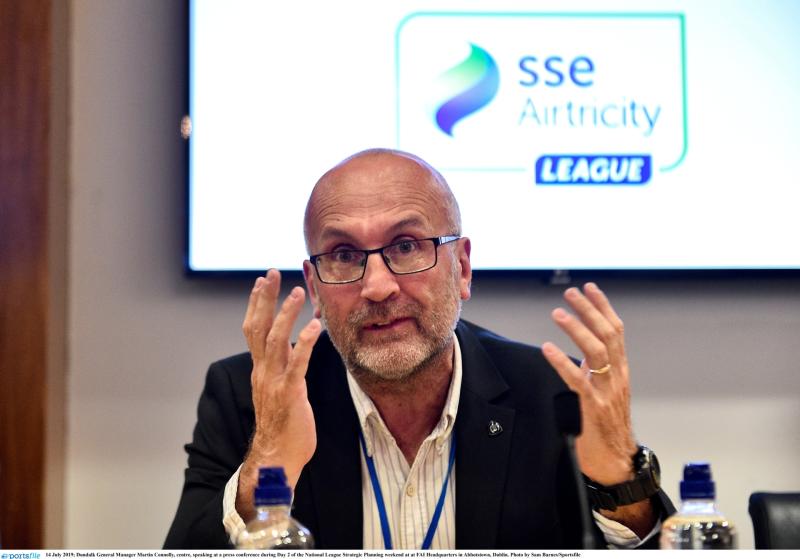 I hope – no, I’m sure - Martin Connolly had the game taped, and by now would have viewed it many times over. (Pic: Sportsfile)

This was Wimbledon all over again, a sudden-death situation that made for gripping television. It also had a touch of Italia 90.

Roger Federer was being cheered home the previous Sunday, needing just a few points to take his game’s biggest men’s title. But Djokovic kept coming back. It was the grade’s closest ever final, the Serbian getting up in the tightest of photo-finishes.

For Djokovic, read Dundalk. When two hours of football on Wednesday evening last - to go with one-and-a-half from Oriel Park the previous week - couldn’t produce a goal, never mind a winner, the second of Dundalk’s Champions League first round qualifying matches came down to a penalty shootout.

Here, too, was history in the making. Never before had this country’s most successful Euro club needed to be the better from the spot to claim victory on the continent. On Irish soil okay, but never while representing their country, going all the way back to 1963 when John Murphy - yes, The Voice of Oriel, himself - twice led the league champions out against Zurich.

Indeed, only one other League of Ireland team has ever been in a European nail-biter. That was Drogheda United, playing against IK Start, 13 years ago. The other County Louth side went down by one, 11-10.

David O’Leary won acclaim for scoring the match-winner for Jack Charlton’s Republic of Ireland side 29 years ago, the Arsenal defender’s scuffed shot finding a way past the Romanian goalkeeper. Last week it was Seán Hoare who gave rise to a mini pitch invasion, the No.4 holding his nerve when a few around him could have lost theirs.

But this is a scenario that needs more than a scorer. Donegal Packie had only to stand tall once in the World Cup finals – Gary Rogers needed to do it twice. A record-breaker on a record-breaking team, the big Meathman, who, if he hadn’t chosen Oriel Park as his home ground, might still be keeping goal at Páirc Tailteann and other GAA pitches around the country, was brilliant, making saves that had class - and Euro signs - written all over them. Give that man a fat bonus.

I hope – no, I’m sure - Martin Connolly had the game taped, and by now would have viewed it many times over. He’d have enjoyed all that happened as Rogers, the Dundalk goalie’s opposite number and the spot-kickers took centre stage, but probably not as much as when the man on the television described him as one of the “club’s owners”.

Do they know about this in the O’Mahony’s, Martin?