INCREDIBLE! Rogers the hero as Dundalk FC beat Riga on penalties to advance in Champions League 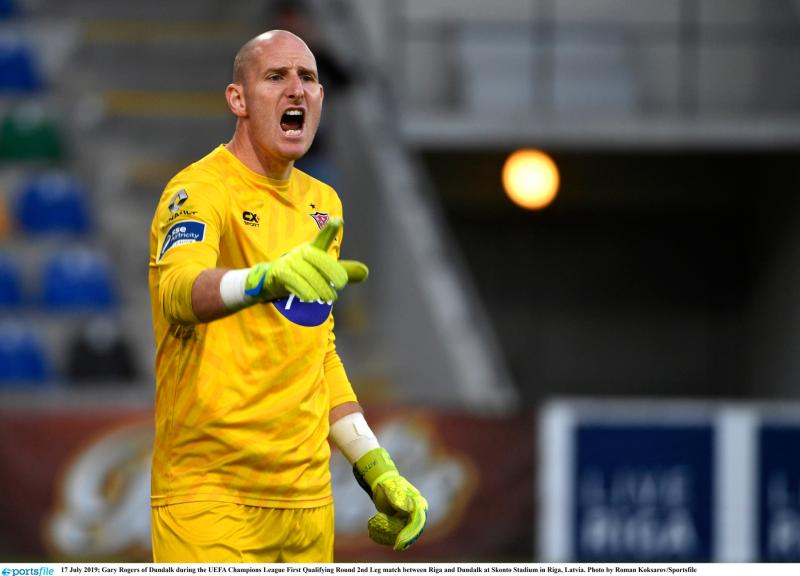 Gary Rogers saved two penalties in a nail-biting penalty shootout as Dundalk FC progressed to the UEFA Champions League second qualifying round and a date in Baku after going the distance with Riga in Latvia on Wednesday night.

Riga – who showed little ambition in the scoreless draw at Oriel Park – approached this decider with caution, which allowed Dundalk to take control of the first half.

They nearly netted an all-important away goal on the 30-minute mark, only for Patrick McEleney to see his driven strike stopped superbly by Roberts Ozols.

Riga were much improved after two early substitutions in what proved to be a tense second half. Dundalk did have the ball in the net through Patrick Hoban, but the goal was ruled out for offside, as the game headed for extra-time.

There was nothing to separate the sides in the additional half-an-hour, where Riga were reduced to 10 men after the dismissal of defender Herdi Prenga for a second bookable offence.

In the shootout, six perfect penalties were followed by four straight misses as the pressure cranked up, with Georgie Kelly spurning the chance to send Dundalk through.

It went to sudden death, and after Rogers denied Armands Pētersons, Seán Hoare kept his cool to convert a lucky seventh spot-kick. 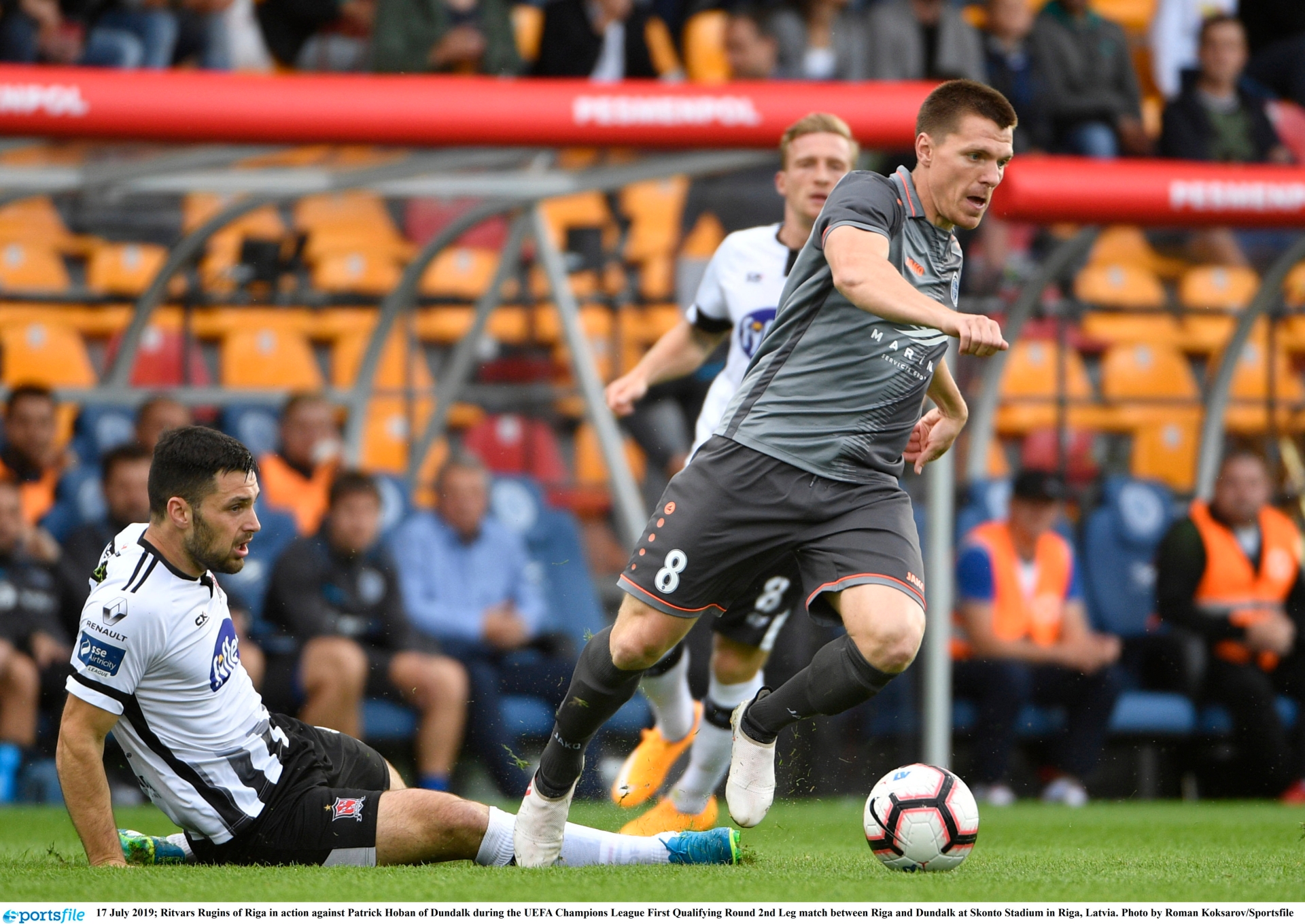 While Riga were unchanged from the first leg, Dundalk head coach Vinny Perth brought in three fresh faces, with one enforced switch as star winger Michael Duffy missed the trip due to the birth of his first child. As a result, McEleney was deployed in a wide role.

Robbie Benson came into midfield, while Andy Boyle started in central defence, after both impressed from the bench in the opener. Dane Massey replaced Dean Jarvis at left-back.

There was little action in the final third in the first quarter of the match. Dundalk’s main threat came down the right; in the 20th minute, Seán Gannon nutmegged Ritvars Rugins, but Ozols did enough to stop a dangerous low cross into the six-yard box where Hoban was ready to pounce.

Dundalk, and in particular McEleney, began to take a real grip of the game around the half-hour.

The Irish champions thought they had the breakthrough when a John Mountney corner dropped to McEleney on the edge of the box, but his shot through bodies was turned away by a fabulous save from Ozols.

A minute later, McEleney drove off target from distance, and then the Derryman delivered a delicate cross to the back post for Mountney who – adjudged to be offside in a marginal call – saw his close-range effort brilliantly blocked by Ozols.

Roman Debelko flashed a shot wide for the hosts at the end of the first half after another mistake from Dundalk, who will have been disappointed to have only been level at the midway point.

The Lilywhites came out brightly after the break, continuing to earn free-kicks in dangerous positions, although their end products were generally poor.

Riga boss Mihails Konevs was clearly unimpressed with his side’s performance and he made two substitutions just six minutes into the second half, with Felipe Brisola and Deniss Rakels introduced. Those changes immediately lifted the Latvians, who were far more of a threat. 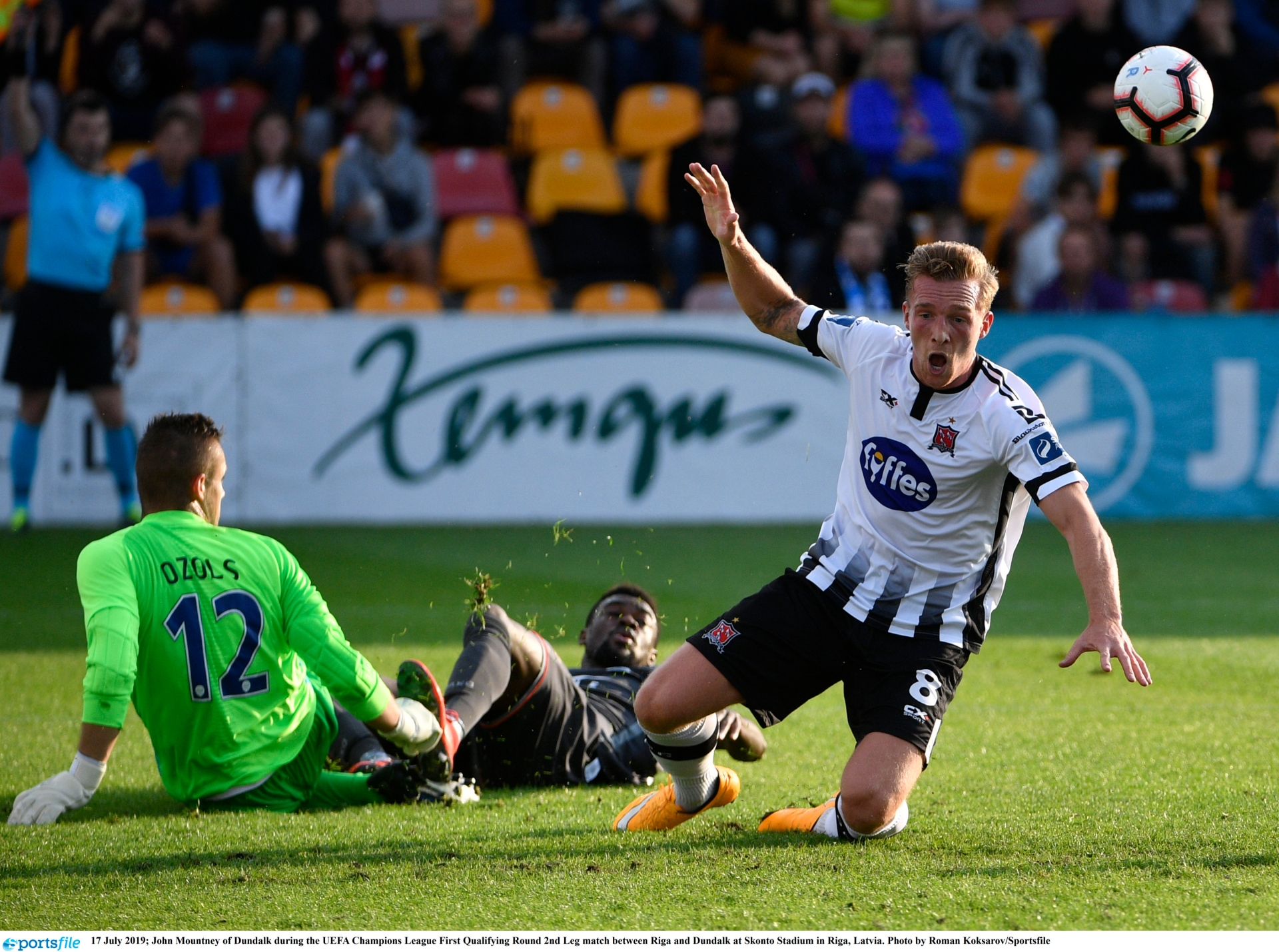 Dundalk had the ball in the net in the 65th minute when Hoban headed in Chris Shields’ cross, but the striker was in an offside position. Seán Murray then entered for Mountney, as McGrath briefly moved to the right.

Daniel Kelly was thrown in with 10 minutes remaining, in place of Benson, and he was shown a yellow card for diving in the box near the end of normal time, as Dundalk desperately searched for a goal.

Into extra-time, Riga started well and in the 98th minute Debelko had a shot blocked by Rogers after turning smartly in the box.

Riga were reduced to 10 men in the 111th minute when centre-half Prenga was shown a second yellow card.

Both teams were allowed to make a fourth substitution during extra-time, with Perth using it to play Georgie Kelly, who replaced McEleney.

With seven minutes remaining, Murray hammered a shot from distance that flew narrowly wide, and that was as close as either side came to a winner, with the tie finishing 0-0 after over 210 minutes of action.

It was left to the dreaded penalty shootout to decide the outcome. Hoban, Murray and Jarvis all scored before Massey and Kelly – the latter to win it – both missed, leaving it into sudden death, where McGrath scored, then Rogers saved and Hoare converted to send Dundalk to Azerbaijan.