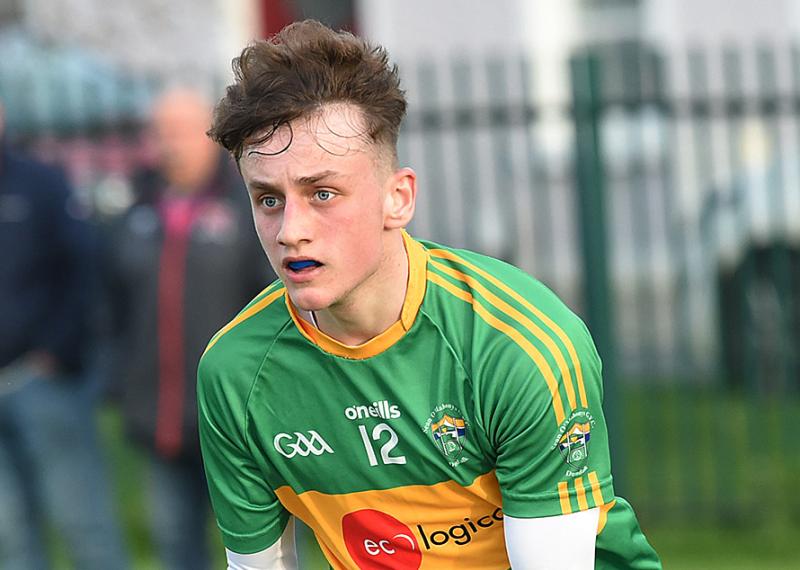 Sean O'Mahony's Terry Kelly has played a huge part in keeping his injury-hit side in the championship. (Pic: Arthur Kinahan)

Cooley Kickhams were not exactly fancied to make a meaningful attack on the Seamus Flood Cup last year. However in the end only St Fechins were able to deny them a place in the Senior ranks.

The men from the Peninsula had a tough start to 2022, albeit while playing in the top-flight of the league. With just four wins from 16 matches they finished bottom of Division 1B and were relegated. But battled harden from taking on the best teams, they have started the championship strong.

First up was a clash that looked simple on paper, Oliver Plunketts. Despite building up an early six-point lead, the Drogheda men were extremely stubborn and were always somewhat in the contest.

Cooley crucially grabbed the opener, vital given the difficult conditions, and they followed this up with another five scores. The lynchpins to their attacks were Cian Connor and Patrick Johnson, who were moving the ball well.

In the end that early lead was decisive as they kept the Plunketts scoreless for large periods in their 0-12 to 0-6 win. Yet worryingly, their opponents had large spells on top, dominating possession in both the second and fourth quarter. A slight concern ahead of bigger tests ahead.

Next up was a meeting with Junior champions Glen Emmets. Here they faced into a wall of defenders, Cooley needing to work hard to break them down.

With Emmets full of energy, Kickhams laboured and fell right into the Tullyallen men’s hands. Shooting from way out and kicking the ball away continuously. Centre Fearghal Malone was the one constant for Cooley on the night, driving his side forward and showing real leadership.

Cian Connor and Enda O’Neill were the main threats on this occasion and as tie wore on, the higher level of football they have grown used to playing helped them get over the line. Michael Rafferty intercepting a kickout and firing home to help his side win by 1-12 to 0-11.

IFC Preview: Irelanders will need to up their game against resurgent St Kevins

Their quarter-final opponents are Sean O’Mahony’s, who have had to dig deep to earn what has at this stage become a seemingly annual ticket for the knockout stages.

The Dundalk men spent the last few weeks of the league flirting with relegation from the top-flight. When it mattered, they were able to find an extra gear. Interestingly it was a crucial win over Cooley Kickhams that secured their future, 1-8 to 0-10, away from home.

The O’Mahonys began their championship journey against Roche Emmets. Without the services of Stephen Kilcoyne, John O’Brien, Chris O’Neill and Conor Martin, all out due to injury, Liam Dullaghan’s side lacked direction and guile at times up front.

They trailed for most of the contest, but were still able to stay in contention, showing that customary steely defiance they are known for. Just as Roche tried to get away; Thomas Rice, who finished with 18 possessions, fired to the net to give his side hope before the break.

They threw the kitchen sink at Roche, and it was backs to the wall stuff for the Division 2 side. Kyle Carroll was certainly somebody who carried the O’Mahony’s fight and his effort, coupled with three from Terry Kelly narrowed the deficit.

But in the end, they couldn’t close it fully and Roche showed enough quality to eke a vital win, 1-12 to 1-10. Another victory for them followed versus O’Connells, leaving the final round as a winner takes all clash.

There is a GAA theory out there that would say the bigger, more physical team tends to win on the wet day but O’Mahony’s, through better handling and decision making throughout their team, debunked that theory tenfold. They also had the silky Terry Kelly on their side too.

Newbie Gareth Hall and Shane Brennan got through a mountain of heavy lifting but the deep setting half forward trio of Thomas Rice, Conor Finegan and Kyle Carroll limited O’Connell’s. It finished 0-10 to 0-5 in their favour.

Both sides have had to dig deep into the well for results. Both have been plying their trade in Division 1. O’Mahonys have had the tougher of the matches which may help them, but can Terry Kelly do the business again on his own?

Cooley have had more problems then expected so far, both the Plunketts and Glen Emmets finding a way of negating their attacking options and doing so in different ways.

They will need all their forwards on-song, unlocking the Point Road men throughout the contest if they are to progress. O'Mahony's are a side with battling qualities, should the peninsula men leave the door open come the final quarter, they will no doubt come close.