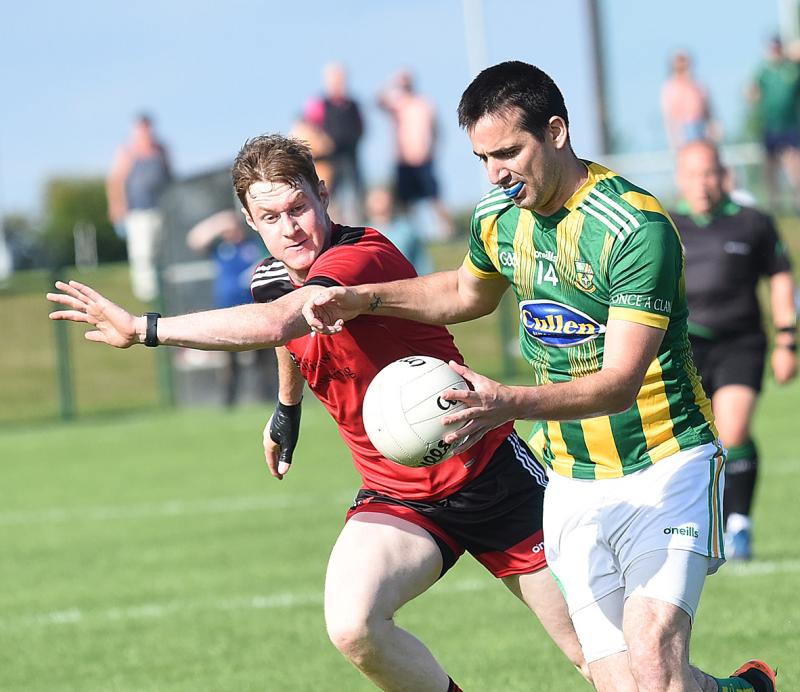 Since the start of the season, Hunterstown have looked like a team desperate to right the wrongs of last year. After looking a great force early on, eventual champions St Fechins easily put them to the sword in last year’s Semi-finals.

Looking to league form first, with Ryan Burns on song they registered 10 victories and two draws, but lost out on the Division 1 promotion play-off by just two points.

But he isn’t their only asset up top, as was seen in their opening round championship game, a 1-16 to 0-7 win over Kilkerley Emmets.

The win was simply down to the good form of Glen Matthews alongside Ryan and Dean Burns. Up until Lennon’s late point, the trio had accounted for all of the winners’ total. That is how accurate and effective they were on the night. Kilkerley could not handle the forwards slick movement.

They were tasked with a very different assignment when facing the Irelanders a week later. First off, the Dundalk side tended to keep the ball for prolonged periods, meaning time on the ball was much more limited.

Yet their ability to quickly turn defence into attack was immense, particularly from kickouts. It led to an early penalty, dispatched by Ryan Burns. He went on to have a sublime game, notching 1-5 as Rovers ran 1-9 to 0-8 winners.

Clan na Gael have had their moments too this year. The Ecco Road men have essentially looked a match for anyone in Division 2. However, three losses in the lead up to the league split saw them drop into the bottom six. They have dominated proceedings since then, finishing with four wins out of five.

Opening their championship against the Division 2 champions O'Raghallaighs, not much was expected of the men from Dundalk. Yet on the night they were worthy winners.

They worked extremely hard, with and without possession, Conor Noonan, Robbie Curran and Jason Callen looking composed on the ball. They took an early lead and never looked back, a second half goal from the ever-influential Billy Smith creating a five point lead they never relinquished.

They kept the Drogheda men off the scoreboard for 25 minutes at one stage and despite spending much of second period with 14 men after Callen received a black and then yellow card, when pressure came late on they didn’t budge, prevailing by 1-9 to 1-8.

The St Kevins fixture went a little bit different, as instead of having a lead to protect they were chasing the Philipstown men. As the game progressed it saw them needing to increase the speed of their game, which hurt their attacking tactics.

They finished the tie with 11 wides, having also dropped another couple short, while a final flurry from St Kevins was enough to gain a 0-15 to 0-8 win.

Rovers potent attack should have enough in the tank to account for the men from the Ecco Road. They were able to eke out a win, even when living off scraps against the Irelanders, so a dogged defensive set up might not be enough to get under the skins of the new favourites for the title.

Billy Smith is capable of causing plenty of problems to Rovers, however the amount of missed chances in their last match versus St Kevins is a worry. Every man will need to put in a performance of a lifetime should this young team want to progress.