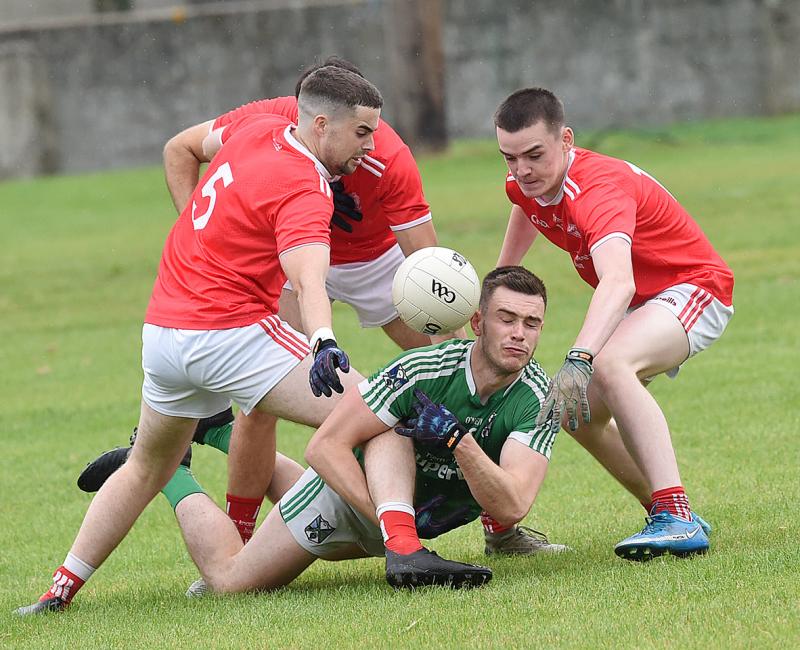 If there was jockeying for position in Louth championship football over the past number of weeks, the whips will surely be out from now on. The three main competitions are down to the last eight, and what that means, of course, is that from now on it’s win you’re in, lose you’re out.

The draw for the quarter-finals was made after St Joseph’s had picked up the last remaining berth in senior on the weekend before last, and as always there was a big public interest in proceedings, staged in the Clan na Gael complex.

Games take place this weekend, and as is now the norm when championship football is at the knock-out stage, decisions will have to be reached on the day. In other words, no replays.

In another change from other years, club football is getting a free run. County fare is done and dusted for the year much earlier than usual, and though here in this county there are mostly single-game fixtures, attendances would suggest a healthy spectator interest.

With no activity in Croke Park and the other big venues, club fare would appear to be benefitting. And the experiment of playing games on a Monday night is working.

On the question of fixtures, it’s been noticeable the absence of matches at three prominent venues. McGeough Park, Haggardstown, and Dunleer’s Pairc Ui Mhuiri, each of which has staged the county senior final, hasn’t figured on the championship rota for the quarter finals, and neither has Hunterstown’s Pairc Baile Fiach.

Word is that the venues’ three clubs, Geraldines, Lannleire and Hunterstown Rovers, have not made their grounds available in protest over recent Co Board decisions.

O’Rahilly’s failure to make the knock-out stages of the intermediate has caused most surprise. Yes, St Mochta’s could have been expected to emerge in senior having played in last year’s final, but their group was easily the most competitive of the four, and it was only on score difference that the Villagers failed to make it.

O’Rahilly’s, however, had looked good to advance. They had fared best in a 16-match league campaign, finishing with a surge to pip Dundalk Gaels; but by coming a cropper in each of the group matches, going down to St Kevin’s and Clan na Gael, they exited the championship, and as a consequence killed off any chance of Inside Track bringing up the treble.

But should St Mary’s and Lannleire score in the other title tests, we’ll be tuning up for Meat Loaf’s Two Outta Three Ain’t Bad (Not that it really is.)

Senior’s big three, Naomh Mairtin, Mary’s and Newtown Blues, feature in the quarter-final draw as was widely anticipated. Mary’s sauntered through their preliminaries, Mairtin’s had to clear a few sticky obstacles, but for a while in their final group outing the Blues took an uncomfortable look at elimination.

The champions of three years ago trailed St Patrick’s by five points at one stage in the final group game, but by reducing the margin to two at the finish, they did enough to go through on score difference.

Mochta’s, the other team in the group, were well represented at The Grove for this tie and their allegiance must have swayed from one side to the other over the 60 minutes.

They’d have been on Pat’s side when the Lordship men were in front, urging them to go even further clear. But it would have been different when the Blues closed to a point. At that stage, Mochs would have been rooting for the Drogheda side, hoping they could close out the deal which would have put them through. It didn’t happen for them.

Mary’s had it easy, beating Dundalk Gaels and St Joseph’s by huge margins; but champions Naomh Mairtin could never relax in either of their games, getting a good testing from St Fechin’s and Dreadnots. Geraldines caused a mild surprise by emerging with full points from their meetings with St Bride’s (the other qualifiers) and Mattock Rangers.

Dundalk has a strong representation in the chase for intermediate honours. Clan na Gael, Sean O’Mahony’s and Young Irelands have all made it through, and are joined by two other north county sides, Roche Emmets and Cooley Kickhams.

The latter are now taking their instructions from Colm Nally and apparently benefitting from the former Louth goalie’s huge experience. Also in the mix are Glen Emmets, St Kevin’s and Hunterstown Rovers.

Pick an outright winner from that lot and you know your stuff. The four quarter-finals are on Saturday, two of them with a 5 o’clock throw-in, the other pair going off at 7.30.

For the zealots among supporters it will be possible to see all four of the senior quarter-finals this Sunday. And there won’t be that much travelling to do, either. It might, however, be no harm to fill the flask and stock up with plenty of ‘doorsteps’.

Mary’s are out against Bride’s in Clan na Gael Park at 1 o’clock, and a couple of hours later, Blues and Joe’s go head-to-head at Darver. It’s then on to The Grove for Mairtin’s 5 o’clock tasty meeting with St Pat’s. The four-match programme ends with Geraldines facing St Fechin’s in Stabannon at 7.

Through to the last eight in junior are (paired as they are listed), Lannleire, Glyde Rangers, Wolfe Tones, Westerns, Naomh Fionnbarra, Naomh Malachi, John Mitchel’s and Stabannon Parnells.

As with the intermediate, you’re a better man than me, Gunga Din if you can come up with the champions from that lot. IT is sticking with Lannleire.

Sam Mulroy has shown he hasn’t lost the scoring touch, Dessie Finnegan is wearing his years well in the Pat’s colours, while his colleague, Joe Connor, is a joy to watch when he’s on a run. And he can finish as well. Conor Grimes carries Glen Emmets’ main threat.

Mickey Harte has been doing the rounds, and it will be interesting to see who he’ll be calling on for winter duty in preparation for next season’s Division Two league campaign.