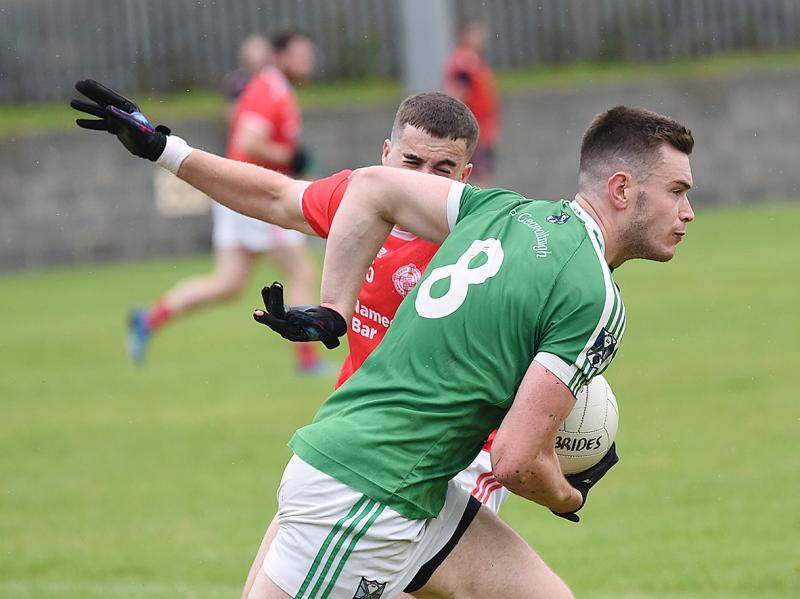 The Geraldine's Matt Corcoran in action against St Brides in the Group Stages of the Senior Championship. (Pic: Arthur Kinahan)

No doubt both the Geraldines and St Fechins will fancy their chances of making a Semi-final, which is a great step for a side that flirted with relegation last year and another that has just made the jump back to Senior Football. They collide this Sunday in Stabannon (Throw in 7PM).

After a strong start to the league, the Blackrock men slowly petered out in Division 1, albeit without ever flirting much with relegation. Come the championship they were given a plum draw as they avoided the major names. Mattock Rangers and St Brides standing in their way of progression.

Goals are worth their weight in gold, even more so come championship and four efforts from Shane O’Hanlon (2), Brian Cafferty and Conor Rafferty were the difference against Mattock. O’Hanlon reacted quickest to palm home an effort in the first 60 seconds and they never looked back.

It all came so easily to them, the Collon men seemingly unable to penetrate the Gers defence. Up top Shaun Callan looked unstoppable in the air and was helping create attack after attack for O’Hanlon and Co. In the end they coasted to a 4-8 to 0-7 win to assure their progression.

The next tasked proved a very tough scenario. St Brides were a different beast, and that lovely attacking flow was not on offer, in the first half at least. That was a half that took 17 minutes before either team got on the board.

Anthony Cunningham’s troops had plenty of the ball, often turning the ball over deep in their own half. The problem was they were unable to get bodies up the pitch fast enough to get into scorable positions.

The tie opened significantly in the second half, which played into the hands of O’Hanlon. The men from Blackrock had found their attacking grove, and their playmaker stepped up to the mark with seven second half scores to get them over the line, 1-10 to 0-8. Helped by poor St Brides shooting.

The only negative is they will be without the services of Paul Clarke, who was sent off following an altercation with Sean Brennan late into the contest.

St Fechins welcome back to Senior Football was a date with the Dreadnots, a side very much out form going into the championship. Their local rivals started on top early on, before the Termonfeckin men bagged two first half goals, from Ronan Holcroft and Bevan Duffy and that proved vital to their win.

Whoever had the ascendency in midfield was usually was on top. Paul Clarke’s troops began winning plenty here, be it from breaking balls or directly from kick outs, the ultimate goal usually being to pick out Holcroft as soon as possible. With him on-song they ran out 2-8 to 1-9 winners.

Then came the ultimate challenge as they squared up to county champions Naomh Mairtin. This was always going to be a huge test, but to their credit they put in a huge effort.

In Niall McDonnell, the underdogs had an ace in the hole. The Termonfeckin goalkeeper was a man inspired and made up to six point-blank saves on the night and crucially landed three 45’s with ease. They bagged the opening three scores, but still trailed 0-9 to 0-7 at the break.

The second half saw the Joe Ward holders increase their lead via a series of uninterrupted scores, yet St Fechins stayed fighting until the final whistle, a trait which will no doubt give Clarke great confidence that they can go deep into the competition.

St Brides were able to negate the attacking threat posed by the men from Blackrock for large periods of their tie and St Fechins did somewhat negate the threat of Dreadnots and Naomh Mairtin, suggesting they could do this again.

If the free flowing Geraldines arrives in Stabannon, they will be hard to beat. But St Fechins will be full of confidence and have plenty of their own threats. Whoever is better able to negate the other’s playmaker should prevail. But both teams have cracks to expose.