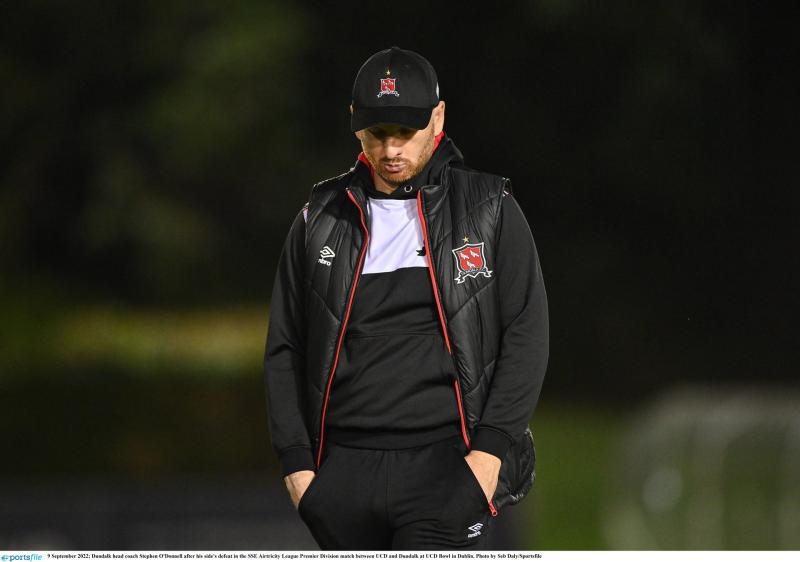 Stephen O’Donnell fully accepts that Dundalk FC supporters are within their rights to vent their frustration following Friday night’s 3-2 loss at bottom-of-the-table UCD.

The Lilywhites had twice taken the lead in Belfield at different stages through Keith Ward and Steven Bradley but were pegged back on both occasions by Thomas Lonergan and Dylan Duffy, before Lonergan added his second to win it for UCD on 88 minutes.

In the context of the SSE Airtricity League title race, Dundalk had earlier in the week been granted a huge lifeline after the FAI determined that Sligo Rovers, in their recent 2-0 win over the Louth side at The Showgrounds, had, in fact, fielded an ineligible player.

The result was therefore overturned and awarded as a 3-0 victory for O’Donnell’s side, meaning three points against UCD would have seen them go joint top on the night.

Instead, defeat in Belfield will have Dundalk anxiously looking over their shoulders at St Patrick’s Athletic in the race for guaranteed Europa Conference League qualification.

“Tonight’s a sickener, there’s no doubt about that. The weekend’s going to be miserable and that’s football. You live through your results and I think the players are the same.

“I thought we played well last week (against Shelbourne). I’m not going to get into an argument. We’re going to give it our all and see where it takes us. As I said, we’ll take stock and have a look at the game over the weekend and take it from there.”

Not including the reversed 3-0 win over Sligo last week, Dundalk, although undefeated at home, have won only three of their 16 away fixtures this year, and with just six games to play, are a single point ahead of fourth-place St Pats, who have played one match less.

Rightly or wrongly, poor showings in each of their last four outings in all competitions has led to some supporters questioning O’Donnell’s suitability for the job, despite the fact The Lilywhites are 15 points better off than they were at the same stage last season.

“It’s very reactionary,” said O’Donnell in response to fan criticism. “I’m a supporter of different sports and I’d be the exact same. That’s your overriding feeling, of course it is.

“When you leave the game, you lose the game, of course supporters are going to be angry. It’s their passion. I have no qualms about that. I’d fully expect them to be angry and disappointed, and so are we, but that’s sport. That’s what it is.

In the event of Dundalk finishing fourth, they would then be relying on one of themselves, Derry City or Shamrock Rovers lifting the Extra.ie FAI Cup at the Aviva Stadium on November 13th, if they are to make a return to the continental stage.

The Lilywhites have already disposed of Longford Town and Wexford in this season’s FAI Cup but face a stiffer test against another First Division side in the quarter-finals this Friday night, when they travel to The RSC to take on Waterford (kick-off, 7.45pm).

Third in the First Division, Waterford knocked out holders St Pats in the first round, beating them 3-2 in Inchicore, before thrashing Malahide United 6-0 away in round two.

With the game to be decided on the night, O’Donnell is anticipating a tough encounter, but knows it will be difficult to lift his players following their disappointment at UCD.

“This weekend’s going to be miserable, but what other option do we have but to get ready for a cup quarter-final next week? We will definitely do that, but there’s no getting away from it tonight.

“Individually, Waterford have lots of talented players, what I call Premier Division calibre players, without a doubt. It’s going to be a tough game, we’re going there away from home.

“Cup quarter-finals will be a very good atmosphere, so it’s a game, when this sort of dies off over the weekend, that we’ll be really looking forward to.”

Friday night’s FAI Cup quarter-final between Waterford and Dundalk at The RSC will be refereed by Neil Doyle (Dublin) and can be streamed live on LOITV for a price of €5.