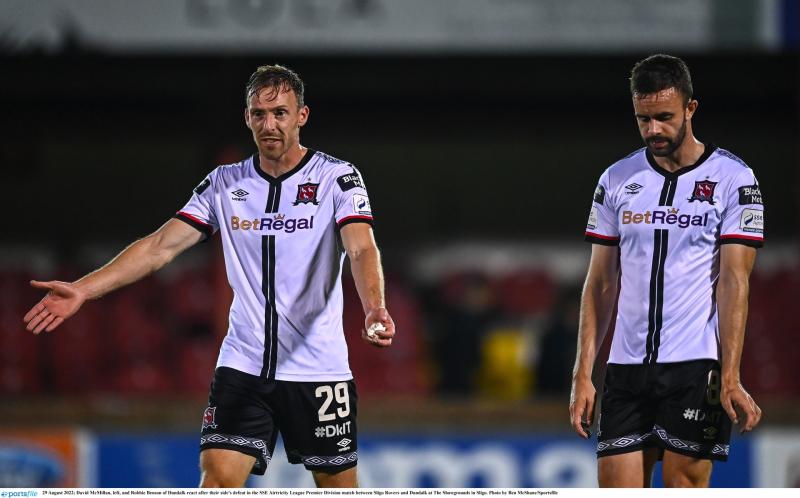 David McMillan, left, and Robbie Benson react after their side's defeat to Sligo Rovers at The Showgrounds

Dundalk’s recent slump in form continued after they were held scoreless by Damian Duff’s Shelbourne at Casey’s field last Friday.

That was the night Pat Hoban picked up a serious injury against Bohemians. The Lilywhites won the game at Dalymount. But since then, the goals have dried up. They have gone three league games without scoring a goal.

The loss of Pat Hoban up front has been incalculable. A team that was motoring nicely since they beat Bohemians on 12th August has seen their results in the league take a nosedive.

Worrying factor is that there is no word on when the Dundalk captain is returning. After the Sligo game last week Stephen O’Donnell said that Hoban was progressing well with his injury. But there has to be patience with a calf muscle injury.

O’Donnell told me when I asked him that there was no truth in the rumours that Dundalk’s ace striker could be out for two months or indeed until the end of the season. He stressed there wasn’t.

But he still can’t put a timeline as to when the Dundalk goal scoring machine will be back. After the Shelbourne game he told me a player with a muscle injury must be given all the time he needs.

Daniel Kelly also remains out with a hamstring strain. He is badly missed too. There is no word yet as to when he could be returning. Injury has also hit Robbie Benson in the past month or so. He has played in some of the recent games, mostly coming off the bench.

Robbie has been struggling with a pelvic injury. Of course last Friday week it was his penalty that eventually got Dundalk through to the quarter final of the cup.

But the Dundalk midfielder is badly missed in the middle of the park.  Again his sporadic absence has had an effect on Dundalk’s performances. 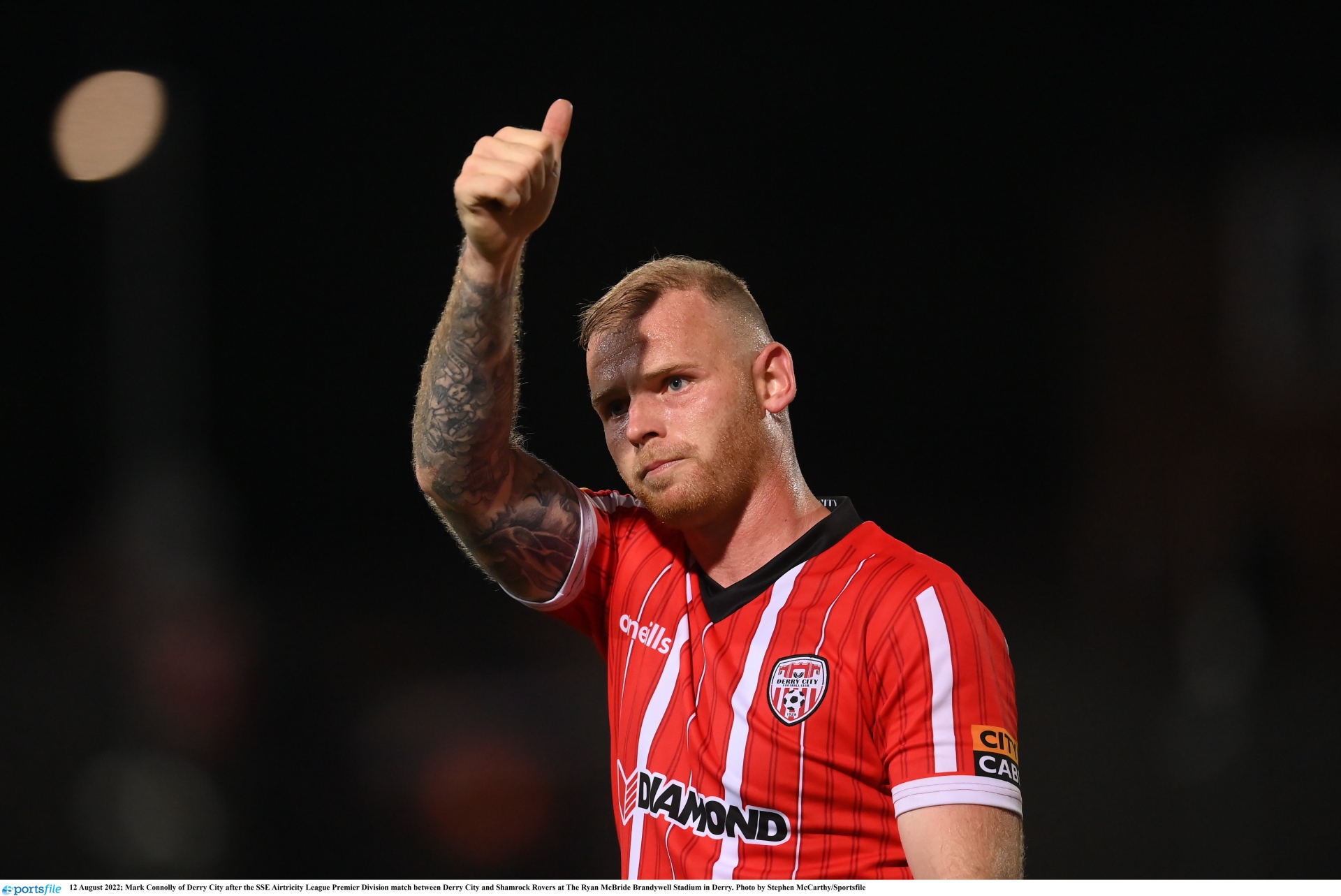 The loss of Mark Connolly has also had a significant influence on the team’s recent slump in form. The defence was all over the place against Wexford. It was also torn to shreds three days later against Sligo.

Stephen O’Donnell went with three at the back for that game. But his plans went out the window early in the first half after Darragh Leahy, the last man back, and got a straight red card.

Sligo ran the Dundalk defence ragged and would have won the game by more than they did but for some magnificent saves by Nathan Shepperd. Of course that result has now been overturned, following Sligo's use of a suspended player.

Stephen said after the Shelbourne game he had to assemble a team from nothing. He also exclaimed the team had no pre-season as he was assembling a new team right up to the start of the league. One of those players he brought in was Mark Connolly.

Since Mark left the Dundalk, defence has been easy enough to cut open. But for Nathan Shepperd they would be conceding more than they have done.

Mark Connolly provided much needed cohesion and organisation in the defence. Games against Shamrock Rovers, Wexford and Sligo saw the Dundalk defence so porous. Connolly was badly missed. It would have been worth Dundalk’s while to fork out the extra money to keep Connolly.

Stephen O’Donnell rejected my thesis that Connolly was badly missed. But I firmly believe his departure and the loss of Pat Hoban could see Dundalk’s season end in disappointment.

Despite this Dundalk have the best and most intelligent manager on their books. Next season he will have proper pre-season preparation with his team and will be able to assemble a much more strengthened squad.

Friday night’s game at Casey Field saw a great match programme dedicated to the late Dessie Casey. There was a minute’s applause in his memory and a fantastic big screen with Dessie’s picture on it, sponsored by StatsSports.

On the way into the game, I met the wife of former chairman Vincent McKee. He only passed away a small number of years ago.

Mrs McKee said that Dessie was the last of the great administrators of the club from the 1960’s and who also had such a great impact on football, not only in Dundalk but European and world football as well.

The Lilywhites lined out with two changes to the team that started against Sligo the previous Monday night. Sam Bone slotted in for Darragh Leahy while Keith Ward replaced Joe Adams, who was on the bench.

This was a game Dundalk should have won. Shelbourne were the better side in the first 25 minutes. After that it was the Lilywhites who were mostly in command.

Gavin Molloy had an effort cleared off the line by Stephen Bradley. On 31 minutes John Martin had the goals at his mercy. He blazed wide.

Moments later Gavin Molloy pulled Keith Ward by the shirt in the box. It was a clear penalty. Referee Paul McLaughlin and each of his assistants had poor games and said no penalty.

Just before half time John Martin was pulled back by Gavin Milligan near the edge of the box. Gavin should have been red carded by referee Paul McLaughlin as he was the last Shelbourne player back. He just got a yellow card. It was a disgraceful decision.

Nine minutes into the second half Dundalk came so close. Keith Ward got a cross in from the right. John Mountney rose highest to head the ball off the crossbar. In the dying minutes Marty Smith got in for a great effort that looked a certain goal. Again Nathan Shepperd pulled off a top class save.

Three minutes from the end Shels keeper Brendan Clarke produced a top class save from a Runar Hauge effort.

There was serious concerns for Shels defender Conor Kane in injury time as he went down injured. Thankfully it was not a head injury and he got a great reception from the full attendance as he was being taken off the pitch.

Crowd attendances remain excellent with 2,343 people showing up on a night the game was live on TV. 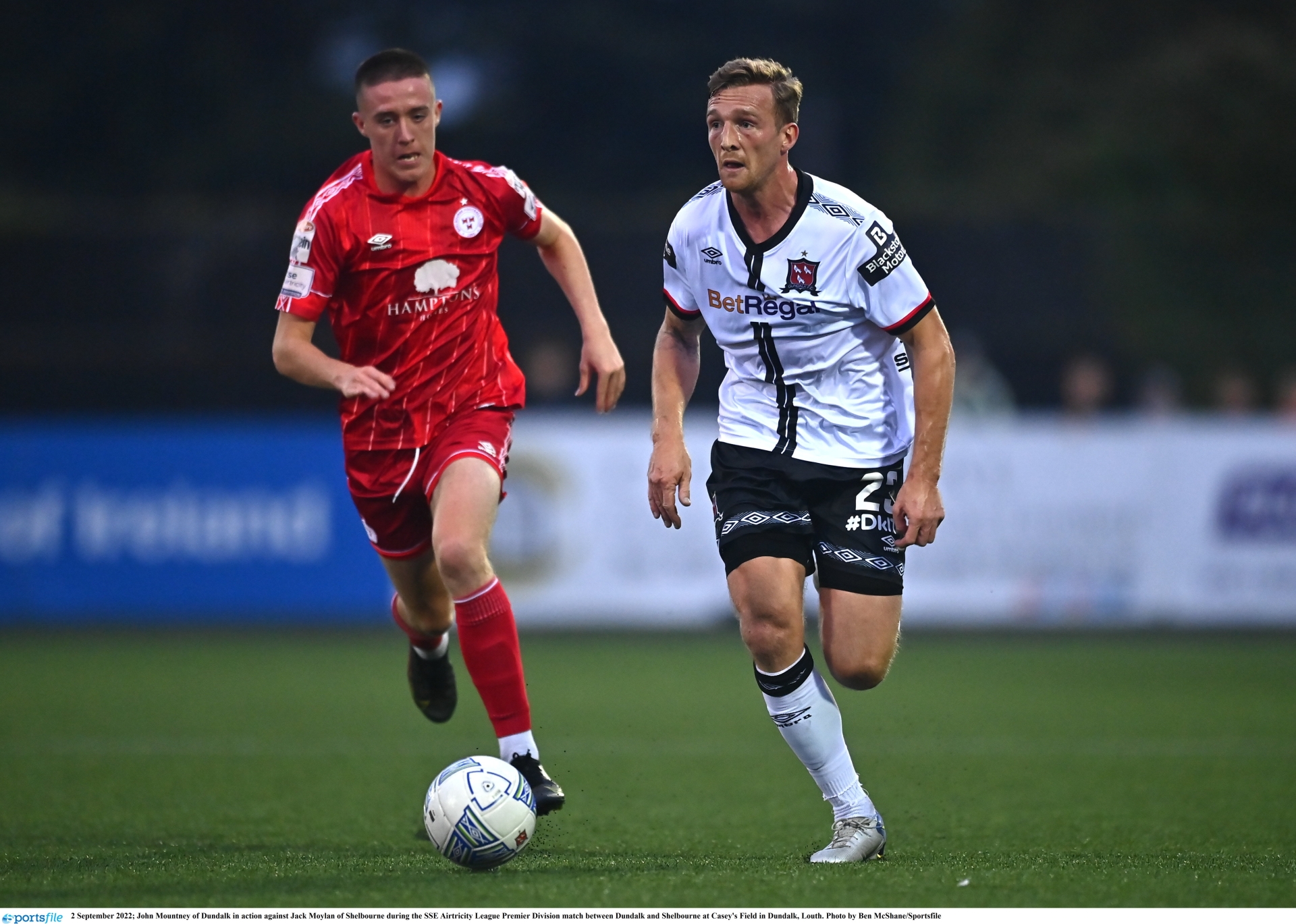 John Mountney says it was great to be back on Friday. He felt Dundalk did well considering it was a third game in a week. He says Dundalk did not start as brightly as they had hoped to, but that they gradually got control of the game and could have gone on to win it.

In the Mayo man’s eyes Ryan O’Kane was a constant threat for Dundalk. He believes it was unfortunate the team could not create the winning goal.

John recalled how he came very close to scoring with his header that crashed off the crossbar. He says his contact with the ball was just not strong enough. David McMillan had a good chance near the end. These were the chances that Dundalk could just not score from.

After being out for 13 months through injury, John stressed in his interview with me just how great it was to be back playing. He says it’s exciting to be back in a team that’s competitive and that wants to win things.

John noted he has two weeks training under his belt without breaking down. He says he did break down in training several times as he tried to get his soccer career back on track. But now he is confident that the clock has swung in his favour again.

John says that he never once thought about quitting while he was out injured. He is 29 now and never once did the thought enter his head. He says the news that Stephen O’Donnell was back in charge of Dundalk was the ultimate motivator for him.

The midfielder stated that all of the players at Dundalk play for the shirt and their manager.  He says there is a real togetherness among all the players and that the current panel of players have some great quality.

John says Stephen came in late as manager, yet he was still able to assemble a team of great quality. He says the balance of experience and younger players has been invaluable.

John joined Dundalk in 2012. He is the longest serving player with the Lilywhites team currently and by a mile. He left the club for a season for St Pat’s, where Stephen O’Donnell was manager for two years.

But John had no hesitation returning to Oriel when he knew the Galwegian was returning. it was a no brainer for him, but to return himself.

He says he has been able to recover from his injury so well at Oriel. He picked it up while playing with Pat’s. John was being patient with himself, as he does not want to see a recurrence of his injury.

He says that playing three games in the past week will sharpen him up and help him to get a return to full match fitness.

John said he had been sitting on the fence watching the games because of his injury. Now he says it’s just been great being back at Oriel. And now he is playing again, he says it will be great to give something back to Stephen O’Donnell, the club and the fans.

They were very lucky not to concede a third goal at the death. Dundalk played the second half with just 10 men when Andy Boyle was sent off. Have a safe week. Please remember to look after yourselves and others .And of course be careful out there.