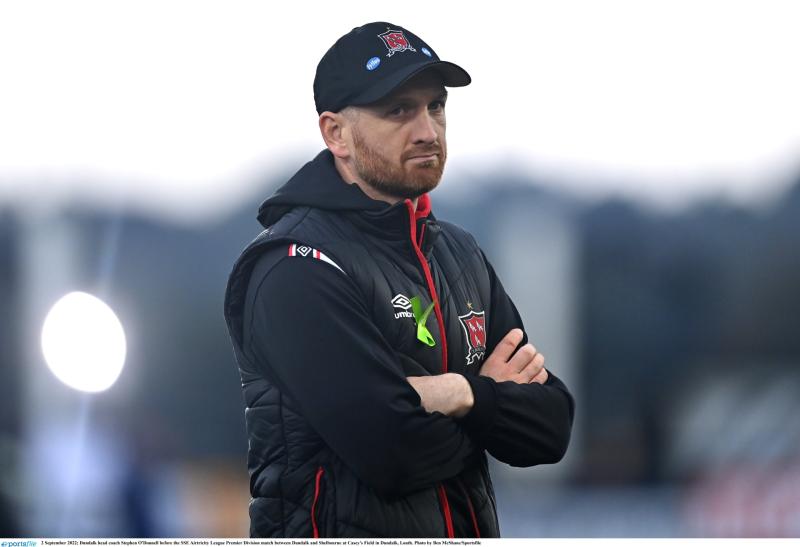 Stephen O’Donnell says there’s no pressure on his Dundalk FC team as they prepare to battle his former employer, St Patrick’s Athletic, for European qualification next season.

Just one point from their last three SSE Airtricity League fixtures had seen The Lilywhites drop into third position after 29 matches and St Pats would have overleaped Dundalk if they recorded a victory in their game in hand at Shelbourne (to be rescheduled).

However following the use of a suspended player by Sligo Rovers in their 2-0 win over the Lilywhites, the result has now become a 3-0 victory for Dundalk. That leaves them back on 53 points in second position, albeit with Derry City and Pats below them having played one less fixture.

Should O'Donnell's troops slip below two these teams into fourth position, it would not guarantee a place in the Europa Conference League, and would leave Dundalk relying on themselves, Derry City or Shamrock Rovers winning the FAI Cup.

Derry are at home to Rovers in the quarter-finals, while Dundalk travel to First Division side Waterford, with both ties commencing throughout the weekend of September 18th.

“We go into every game with the same mentality and we will next week. There’s a lot of lads in the stand watching the game, but the players we had out tonight (against Shelbourne) gave everything and were excellent.”

Dundalk’s squad has been decimated by injuries, among other factors, over the past number of weeks, with O’Donnell naming only seven substitutes – two of which were goalkeepers – for the 0-0 draw with Shelbourne at Casey’s Field last Friday night.

“I think we’ll be a lot healthier in the next week or two weeks,” he added. “There’s a lot of ones that are sort of on the periphery of being ready to come back.

“Paul Doyle hasn’t trained. We threw him on because John Mountney hasn’t started in a year, and then just because of bodies, he’s played two games now in four days. He was feeling the effects of that, so we’d like to be careful with John.”

O’Donnell will again be without Patrick Hoban and Daniel Kelly for this Friday’s visit to bottom-of-the-table UCD (kick-off, 7.45pm), but Darragh Leahy returns from suspension, while Robbie Benson and Robbie McCourt could also be reintroduced.

Meanwhile, the Democrat understands Alfie Lewis, Daniel Kelly, Greg Sloggett, John Martin, Robbie McCourt, Paul Doyle and Ryan O’Kane are already signed up for next season, while captain Patrick Hoban is on a contract which runs until the end of the 2024 campaign.

In the coming months, O’Donnell is hoping to tie down more of his key players, not least goalkeeper Nathan Shepperd, who has been a revelation since joining from Brentford.

Although his contract runs out at the end of the season, the option of an additional year can be initiated for a player that has caught the eye both domestically and cross-channel.

The Galwegian spoke about how he had been thrown into the deep end, building a squad almost from scratch. However results this year, given their lack of real preparation, has left him optimistic about the future.

“Other teams were in a couple of months with their settled squad, somewhat. At the start, we were basically learning on the job. We’ve lost individuals now through one thing or another, so there’s faces coming in.

“We haven’t had a structure or a platform to go and really hammer home, have a six-week base, seven-week base of this is what we are. From that regard, the actual performance of the players and the team, I think they deserve a massive amount of credit.

“I’d like to think it’ll be a lot more settled than it was, obviously, the last off season. I think we have a good platform with a decent base and loads and loads I think to look forward to with this group.”