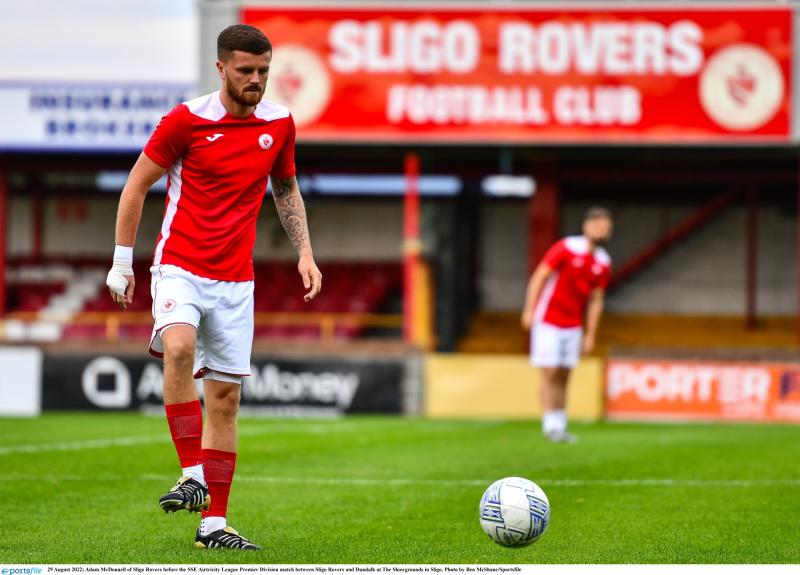 Adam McDonnell of Sligo Rovers before the SSE Airtricity League Premier Division match between Sligo and Dundalk. The midfielder took part in the match despite being suspended

The FAI has this evening confirmed that Dundalk FC have been awarded a 3-0 win over Sligo Rovers following their use of an illegal player.

The sides met at the Showgrounds on Monday August 29th, the Bit O Red taking the three points via a 2-0 victory, the goals coming from Dundalk defender Andy Boyle and Estonian Frank Liivak.

However taking part in that contest was Adam McDonnell, who unbeknownst to Rovers at the time was suspended and should not have played in the tie.

"An independent Disciplinary Committee of the Football Association of Ireland has determined that Sligo Rovers FC fielded an ineligible player in the SSE Airtricity League Premier Division fixture against Dundalk FC on Monday, August 29th 2022" read a statement issued by the FAI earlier today.

"The Committee has ruled that Sligo Rovers FC will forfeit the game by a scoreline of 0-3."

The news of a possible illegal player in the Showgrounds clash came to light Monday evening, a week after the game had been played. The West of Ireland club made a comment immediately and fought the accusations, claiming the governing body had issued them with "contradictory communications" in relation to McDonnell's suspension.

The club sought out legal legal advice and sent a representative to the FAI Hearing. But in the end the Committee decided that Sligo had breached league rules.

"Sligo Rovers are disappointed with the outcome of the FAI Disciplinary Control Unit hearing which results in an overturning of the recent win against Dundalk at The Showgrounds" the club commented.

"While we understand and admit that an error was made on the club's behalf, the issue was contributed to by the omission of the player’s name from two weekly suspension lists issued by the FAI to all clubs, which lead to confusion. As a club, we will move on from this while considering our options."

The win sees the Lilywhites move up into second position once again in the league table on 53 points, one ahead of Derry City who have a game in hand.