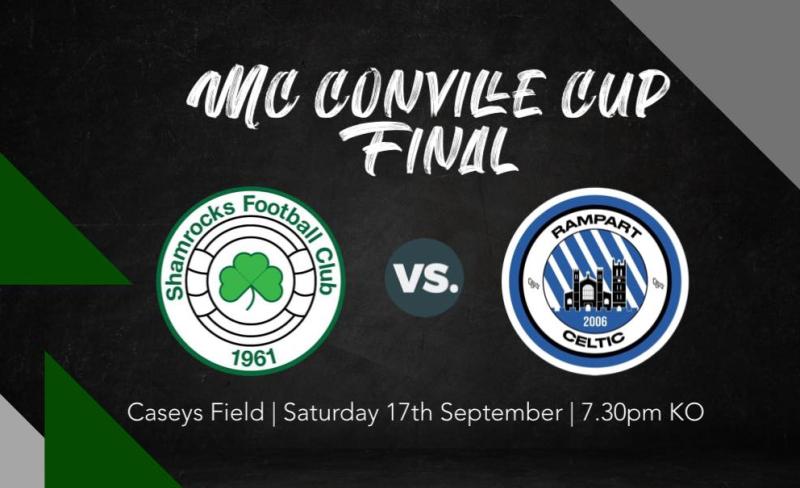 Played at a very fast pace from the kickoff, this semifinal swung from end to end with both sides intent on attacking, right until the final whistle. It was thanks to two superb goalkeepers that it took until the 35th minute for the deadlock to be broken.

A sublime piece of footwork from Robbie Mackin just outside the box saw the Shamrock's play-maker place his ground shot just inside the far upright to put his side a goal ahead.

Mackin turned from hero to villain three minutes later giving away a penalty for holding his counterpart in the Bellurgan side. John Smith duly dispatched the spot kick to level matters.

Turning over on equal terms, it took just nine minutes into the second period for Robbie Mackin to strike again, when he finished off some brilliant approach work by Dean Brown to put the Hoops ahead once more.

Bellurgan introduced Joe Needham to boost the tireless work rate of Smith and Murphy in their midfield, as they pressed their opponents deeper and deeper into their own half.

As it looked like the Peninsula side would force the game to extra time, a wonderful run down the right wing from Dean Brown allowed him to get the elusive winner, having evaded two tackles before tucking the ball inside the far post with a killer goal.

Shamrock's first triple of the League, Clancy Cup and McConville Cup is just one game away for Barry Casey and Liam Lindsey's charges. It was Last achieved in 2016 by Muirhevnamor.

This was a semifinal, which saw both teams suffer from nerves on the big occasion. A disappointing first half was brightened by Lee Wright's goal right on half time, his 99th for the club. A great cross from Sean Bailey put Wright in and he made no mistake from close range.

It took until the 78th minute for Rampart to double the lead, Niall Ferguson shooting home in a crowded goal mouth for his 7th score this season.

A late rally by the Saints brought some excitement, but they were unable to find the net to set up a grandstand finish as the rain finally fell on Clancy Park.

This will be Ramparts third appearance in a McConville Cup final having reached the 2016 showpiece, losing 4-0 to Muirhevnamor and losing 5-3 to Quay Celtic in the 2018 final.

The final to be played in Oriel Park (Casey's Field) on the 17th of September with a 7.30pm kick off.

Joe Carroll: Goal-shy Dundalk need Hoban back for the Cup