Joe Carroll: Goal-shy Dundalk need Hoban back for the Cup 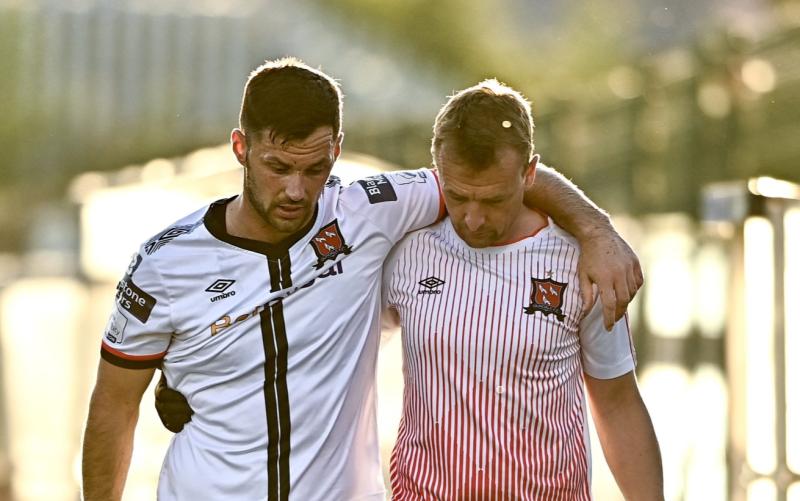 Most of Dundalk FC’s focus in recent weeks has been on the passing of former club president, Des Casey. But there’s also been lots of activity on the field, and it hasn’t been great.

A real opportunity to get involved in the race for the league’s top spot evaporated with that 3-0 defeat by Rovers at Tallaght. Key players are missing, and it showed in this game with the home side showing no ill-effects of the drubbing they’d been handed in Europe a few days earlier.

Then there was a scramble to beat First Division side, Wexford, at Ferrycarrig Park, and though it ended in a 3-2 victory luck was on the visitors’ side, according to all reports. It went to extra-time, Robbie Benson grabbing the winner from the penalty-spot.

The most recent home outing with Shelbourne ended in a scoreless draw, and according to my man at the match, John Murphy, Dundalk missed a sitter, and as a result of losing two points are now in a tussle to hold on to third place, having looked a real danger to Rovers a few short weeks ago.

This page’s long-time correspondent, Jim McCourt, looked in on at the Wexford game on television and wasn’t impressed. That’s not strictly correct: he was mightily impressed – but only with the way goalie Nathan Shepperd played. “Only for him, Wexford would have won by three,” says Jim.

Like many others, he laments the absence of transferred Chris Shields from midfield, or, indeed, someone of the now-Linfield player’s calibre in this vital area. “We were poor here, struggling to gain parity with a supposed weaker opposition.”

Jim’s latest missive arrived before the clash with Sligo and the draw for the Cup quarter-finals. The latter has paired Dundalk with Waterford. It’s a tricky assignment, but it could be worse. Favourites for the title, Shamrock Rovers, have to travel to play Derry City.

Waterford have been taken over, and whether or not it proves to be successful, such a venture nearly always has a bounce factor. Witness the enthusiasm with which Peak6’s arrival at Oriel Park a few years ago was greeted.

McCourt is not the only Dundalk enthusiast feeling downbeat right now. John Murphy and Gussie Hearty were on commentary for Dundalk FM for the Sligo match and I listened in.

The plan had been to go to Stabannon for Naomh Mairtin’s first defence of the Joe Ward Cup, but word came through that there was a logjam on the road to the venue, so I decided to stay put and instead turned on the radio.

Not only were the two boys far from pleased with another below-strength Dundalk team’s performance in the early exchanges, they crossed verbal swords. It happened after Leahy deliberately handled the ball around the middle of the field, and so prevented a Sligo forward from getting in for a scoring chance.

Gussie said that as Leahy was the last man behind the ball, he would get a red card. John disagreed. He felt that if the forward had taken possession, other defenders might have been able to get back to dispossess him. Gussie got it right, but John still wasn’t happy with the decision.

Still, there was no falling out. The boys were quickly back in harmony. They bemoaned the absence of leading light, Pat Hoban. Just how much the ace striker is missed is reflected in recent scorelines. He’ll be needed for the Cup.