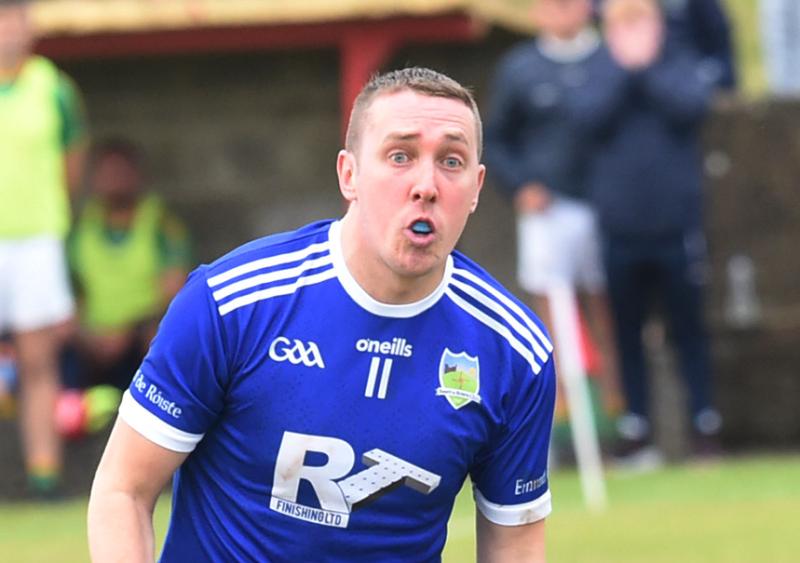 Barry O'Hare kicked six points for Roche as they booked their place in the Intermediate Quarter Finals with a victory over O'Connells. (Pic: Arthur Kinahan)

Roche Emmets booked their place in the quarter finals of the IFC, as they held off the O’Connell’s in a match which was filled with drama right until the end.

Roche were minus county man Gerard Browne, and they struggled to punch holes in a packed O’Connells defence, with the likes of David Hoey, the Byrne brothers, Conor Culligan and Andrew Keenan producing commendable shifts.

That factor, coupled with the threat of the Castlebellingham side’s forwards, particularly Robbie Quigley, meant that Paul McKeever’s side were always there or there abouts.

Quigley himself notched up 0-10 in total for his side, and it was the forward’s early kicking which had the O’Connells 0-3 to 0-1 ahead after 10 minutes.

Daire Reilly sent a terrific effort sailing over the bar from distance, before Glen Stewart set up Liam Dawe to level things up at 0-3 each after 16 minutes. Dawe began to make his presence felt on the contest, and he finished with 33 possessions over the hour.

However, with their forwards asking questions of Roche’s defence, Cian Doyle cleverly evaded Harry O’Connell to set up Quigley to fist the ball over from play to put the O’Connells back ahead.

Roche Emmets flexed their muscles, scoring 0-6 without reply between the 18th and 25th minutes of the first half. Liam Dawe (2), Daire Reilly, Mark Byrne, Shane Byrne, and Sean Dawe pointing, giving them a 0-9 to 0-5 lead.

They won five out of eight kickouts contested in that period, as they stepped up their intensity levels, with Liam Dawe, Glen Stewart and Shane Byrne seeing plenty of the ball.

Robbie Quigley’s one-man scoring mission continued, and he traded frees with Shane Byrne to leave it at 0-10 to 0-6 in Roche’s favour at the break.

The second half saw the O’Connells flex their own muscles and dominate from kickouts at either end. They outscored Roche by 0-7 to 0-2 in that third quarter, to ensure they were level by the 47th minute.

After O’Hare put Roche ahead, the Rathduff side looked to have sealed a place in the quarter finals following a mix up in the O’Connells’ defence.

Mark Byrne intercepted a John McLoughlin short kickout, before escaping the keeper’s desperate attempts to pull him down and firing into an empty net to give Roche a four-point lead heading into stoppage time.

However, the O’Connells were not done there. Moments later, they were awarded a penalty when Cian Doyle was pulled down.

Further drama ensued when Roche decided to swap keepers, with Jamie O’Hare replacing custodian Evin Quigley. It made no difference as Jackie Agnew’s penalty was unsavable, making it 1-16 to 1-15.

However, that man again Barry O’Hare had the last say, as after Roche turned over an O’Connells last ditch attempt to salvage a point, O’Hare landed his 6th point of the game.

That meant meaning Roche held on for another two-point victory to advance as group winners, with the O’Connells left to fight it out with Sean O’Mahony’s for second place.