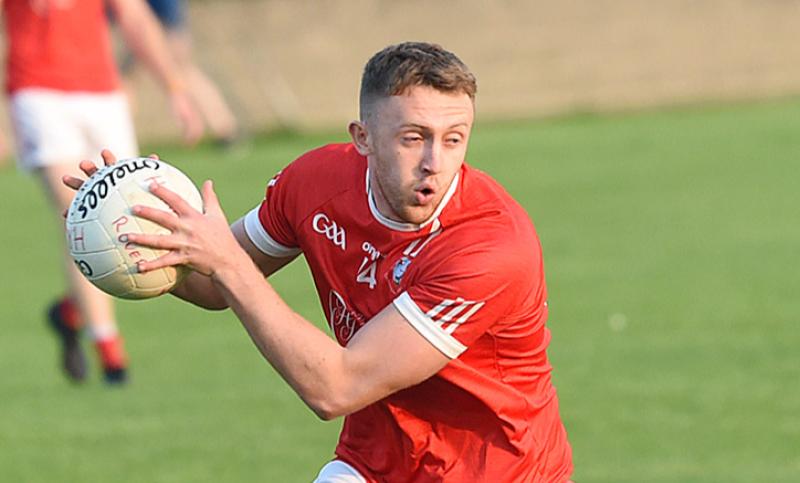 Ryan Burns was Hunterstown Rover’s savour, putting in a huge second half performance to account for a dogged Dundalk Young Ireland’s and book their spot in the Quarter Finals courtesy of a second win of the campaign.

Unlike against Kilkerley, Colm Donnelly’s troops were made work for this victory, the main difference on the night being they were much more clinical in front of goals. The Dundalk men notched 15 wides, but never looked out of the contest and will still have hopes of making the knock-out stages.

Fresh from a break after the league hiatus, the Irelanders came out of the blocks fast and could have had a goal inside the opening 30 seconds only for a fine save from Niall Carrie.

This was a rare example of them moving the ball fast, as the attacking gameplan largely surrounded keeping the ball for as long as possible and being patient in their build up. They happily passed the ball from one wing to other, back and forth and were very comfortable in possession. However, before raising a white flag they notched up five wides in a row.

Hunterstown favoured a much more direct approach and looked at their best when moving the ball quickly, particularly from their own kick outs. This was seen in their opener on three minutes, Shane Halpenny teeing up Glen Mathews seconds after an Irelanders wide.

Despite having little of the ball, they were soon four in front, another quick kickout and speedy transition from defence into attack eventually resulting in a penalty following a scramble in the square. Ryan Burns duly fired home a bullet past Fergal Sheeky on eight minutes.

Speaking of the Irelanders keeper, he was not afraid to get forward, becoming another option up front as they continued to dictate the flow of the match.

They hit back in style with three in a row midway through the half. Jordan O’Donoghue kicked a monster from range on 17 minutes, followed quickly by efforts from Dermot Mone and Ruairi Kelly.

Once again, the swift transitional play from Rovers saw them bag a rapid-fire brace. After trading efforts late in the half, only a goal separated the teams at the break, 1-4 to 0-4.

Adrian O’Donoghue’s troops needed a lightening start to proceedings, however instead it was county star Ryan Burns that took centre stage in the second half. Coming much deeper in search of the ball now, he landed three in row, all from play, to leave his side in front.

Now with a bigger gap to claw back, The Dundalk men began moving the ball faster, knowing they needed to react. But while creating the lion’s share of the chances, this quicker pace saw them taking on harder shots. Six wides followed, along with another dropped short.

Yet this was a highly motivated side, not keen to back down from a challenge and their hard work eventually paid off with three scores in a row. Cian O’Donoghue ended their 17-minute spell without a score, while efforts from Peter McStravick and Jordan O’Donoghue brought the gap back to four.

We were almost in for a grandstand finish when Jordan O’Donoghue was brought down for a penalty on 54 minutes. However, the spot kick by McStravick hit the woodwork and went over the bar.

A final Burns score put some further gloss on the score line, but it was clear they were hugely tested by a determined Young Irelands, who will fancy their chances against Kilkerley should their shooting improve.