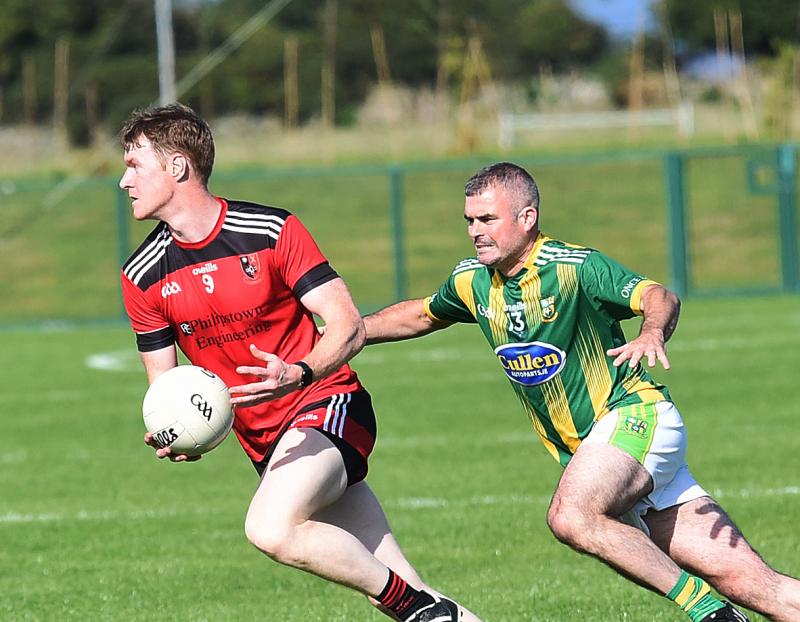 Group 2 has a wide-open feel too it now, as a clinical St Kevins dispatched for Clan Na Gael on a sunny late afternoon in Darver. The Dundalk side had plenty of possession, however they accounted for 11 wides and coupled with too many frees in vital areas they were punished with defeat.

That’s not to say the Philipstown men didn’t deserve their victory; when it mattered down the stretch they bagged six of the last eight scores, five of which were from open play. They took an early lead and would never be pegged back, leading for essentially the entire contest.

The opening score came as early as the second minute, as the men in red and black turned the ball over in their own half. This allowed Shane Meade and Evan Maher to break at speed before eventually teeing up Karl Martin.

This was St Kevin’s main form of attack, pounce on any mistakes from their opponents, all while moving the ball as fast as they could. TJ Doheny was a threat throughout this match, his menacing runs a great weapon.

Such a run resulted in the first of four frees on the night for Lee Crosbie. He finished with with six points to his name. Two more white flags came their way, courtesy of Doheny and Lee Crosbie once more, leaving them with an early four-point cushion.

The Clans played a lot more patient style, constantly moving the ball from one wing to other as they looked to stretch the defence, one which often didn’t budge. The main target man was Billy Smith.

They worked extremely hard to keep the ball, showing an aggressive yet accurate tackling style, leading to them gaining plenty of possession in the opening quarter. Unfortunately for them, that same quarter saw them kick the ball wide five times.

The scores did finally come via two marks, some excellent fielding from Robbie Curran and Smith near goals seeing them both hit the target. However, as the half wore on, they became more predictable, the long ball into the square becoming easier for St Kevin’s to defend.

They ended up adding to their lead, some more pacey solo runs teeing up Evan Maher to point from range while once more Crosbie was successful from two more placed balls.

Three more attempts went abegging for the Clans, but they did grab two more scores via Robbie Curran and Paul Crewe to leave the deficit at four going into half time, 0-8 to 0-4.

After trading points early in the first half, Alan O’Neill’s troops started to turn the ball over more and more, anticipating where the ball would go and regaining possession.

But once more they were their own worst enemies, missing out on three occasions and only getting a single Paul Martin point, via a third mark, during this period of dominance.

An impressive attacking display followed, Doheny, Dylan Maher, Crosbie and Tom Mathews all hit the target to increase the lead to seven. By now the Clan’s looked out of ideas, at this only really thinking of scoring difference with the game looking beyond them

The final tie sees St Kevin’s take on O’Raghallaighs, a win or draw giving them automatic progression, a win for the Drogheda men would see it coming down to scoring difference.