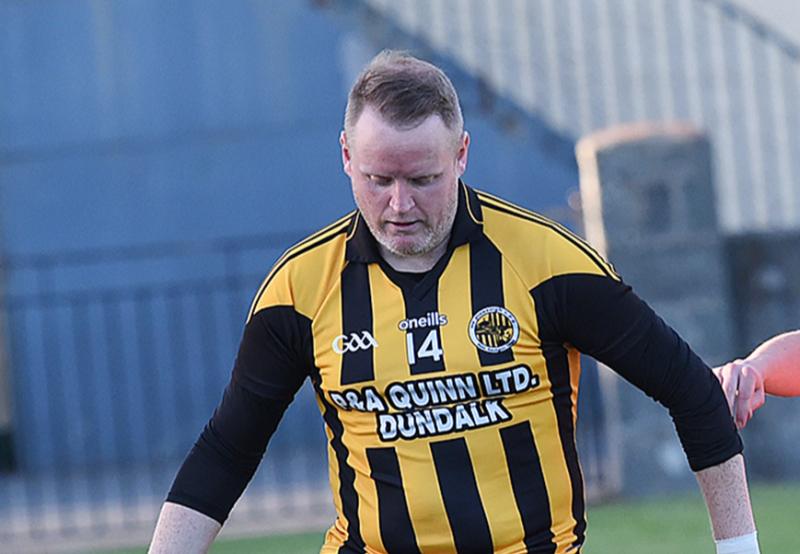 David Boyle helped himself to a hattrick of goals as Na Piarsaigh saw off Dowdallshill. (Pic: Arthur Kinahan)

Last night last, Na Piarsaigh Blackrock began their campaign in the best possible fashion, with a thundering opening round win over Dowdallshill in the Junior championship.

Many about the county seem to have forgotten that the winners were beaten at the semi-final stage last season but their intentions and stock will now be at the front of peoples’ minds with such a commanding win and performance.

With regular Hill' goalkeeper Ridwan Bodunrin absent, David Boyle needed no invitation to swing the tie in his side’s favour. The veteran has scored goals year in, year out for the black and ambers and Friday night Boyle helped himself to a hat-trick.

Niall McManus at full forward for Dowdallshill broke the onslaught on his own goal with some frees, but at half time with the score 4-6 to 0-3, there would be only one winner.

The remainder of the goals came from Sean Geeney who had an impressive showing on the wing, Gerard Smyth from the middle of the field and tigerish half back Stephen McGuinness, who also got in on the act.

Veteran Noel Finnegan came off the bench to find the target for the St Brigid’s Park men but the trusty forward could not save his side from defeat.

This Friday will see a repeat of that aforementioned 2021 semi-final with John Mitchels at the Clans. And with a win under their belts, confidence in Shorty Treanor’s camp will surely be high and so too the possibility of the Rock Road men enacting revenge for last season.