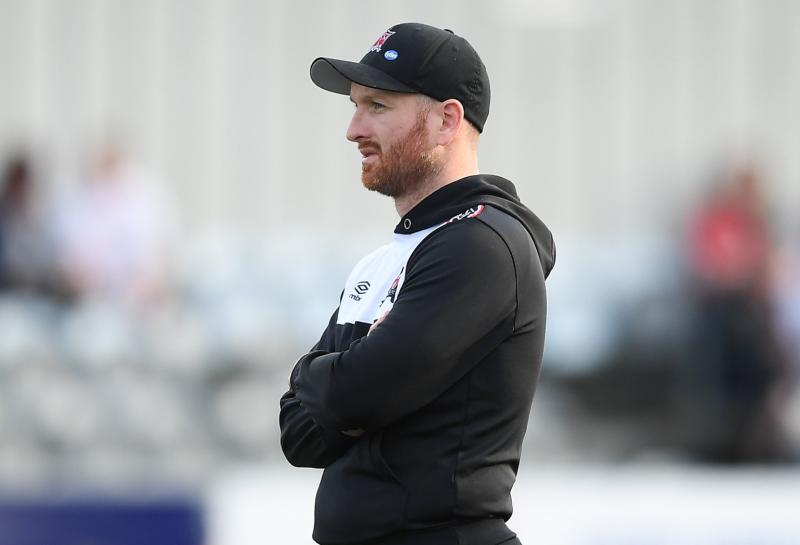 There’s no ill feeling towards Derry City – that is according to Dundalk FC head coach Stephen O’Donnell, who spoke with local media ahead of this Friday night’s SSE Airtricity League showdown against The Candystripes at Oriel Park (kick-off, 7.45pm).

O’Donnell was dealt a major blow with the news of Mark Connolly’s two-and-a-half-year agreement with Derry, where he joins a list of ex-Dundalk players which already included Michael Duffy, Patrick McEleney, Will Patching and Cameron Dummigan.

Connolly was a rock at the back for Dundalk this season, but was recalled from his loan by parent club Dundee United, and a deal between both parties couldn’t be agreed on.

That allowed Derry manager Ruaidhri Higgins to swoop for the 30-year-old Clones native, fending off interest from Dundalk, as well as two leading Irish League clubs.

“We made an offer,” explained O’Donnell. “I suppose there was better offers available, but Mark was great for us and I think we were good for Mark.

“It’s not going to end up into that type of game next week. We’re fully focused on the Derry team, as a whole, and focused on ourselves and the best way we go about it. It’s a good game to look forward to and we’ll be ready for it.

“The board have been brilliant here. Everything we’ve asked for, since we’ve come in, we’ve got, so they’ve been tremendous. Obviously, you would have liked to have kept Mark, but that’s the way of the world. That’s football in every league. We made our best play and it wasn’t to be.

“I was chatting to Ruaidhri. Football is football, so nothing is going to change in that regard. Me and Ruaidhri are really good friends and it’s fair game. There’s a player available. It is what it is. It’s in the past now. Mark Connolly is a Derry City player. We have our own batch of 20-odd really good players.”

Connolly scored for Derry in their 7-0 trouncing of Oliver Bond Celtic in the Extra.ie FAI Cup over the weekend, and is in line to make his league bow versus Dundalk this week.

The Lilywhites have been boosted by the triple-acquisition of Alfie Lewis, Robbie McCourt and Runar Hauge, who featured in Friday’s 4-0 FAI Cup win over Longford.

Lewis, a 22-year-old English midfielder, has joined the club for an undisclosed fee from Plymouth Argyle, having previously played under O’Donnell at St Patrick’s Athletic.

“I had Alfie last year,” said O’Donnell. “He’s just a really, really good footballer and he enjoyed his time in Ireland. The fans, I’m sure, will really appreciate him. He’s just an excellent footballer. He can pick a pass, he’s good in tight areas and can run a game.

McCourt, a 24-year-old defender from Dublin, has represented clubs such as Bohemians, Waterford and recently Sligo Rovers, from where Dundalk have also signed him for a fee.

“Robbie is a player I’ve always wanted and admired. I should have got him after his Waterford spell where he played as a left sided centre-half with Sam (Bone). I thought he was arguably the best left-back in the league last year with Sligo.

“He broke his wrist actually against us when we were at St Pats. That sort of stopped him and he’s had a bit of a stop-start season this year, but he’s a really good player that can play both left centre-half and left-back.

“He’s an excellent footballer, I’m really looking forward to working with him and he’s one to be excited about.”

Hauge, a 20-year-old Norwegian winger, has signed on a short-term loan deal from Hibernian, and has also played professionally in his home country with Bodo/Glimt.

“We’ve a certain way of playing, especially with our offensive play. Runar is going to get the playbook on that as the days go on. I thought he done very well for his first 55 minutes.”

Unbeaten at home this season, on Friday, Dundalk will be hoping to form a cushion between themselves and Derry in second, in what promises to be an electric atmosphere.

“It will add to obviously the intensity of the game,” O’Donnell concluded. “We’re looking forward to it and I think the new players will get a good feel of what Dundalk is all about next Friday.”

Robert Hennessy (Limerick) will officiate the fixture between Dundalk and Derry at Oriel – a game that is also available to stream live on LOITV for a price of €7.