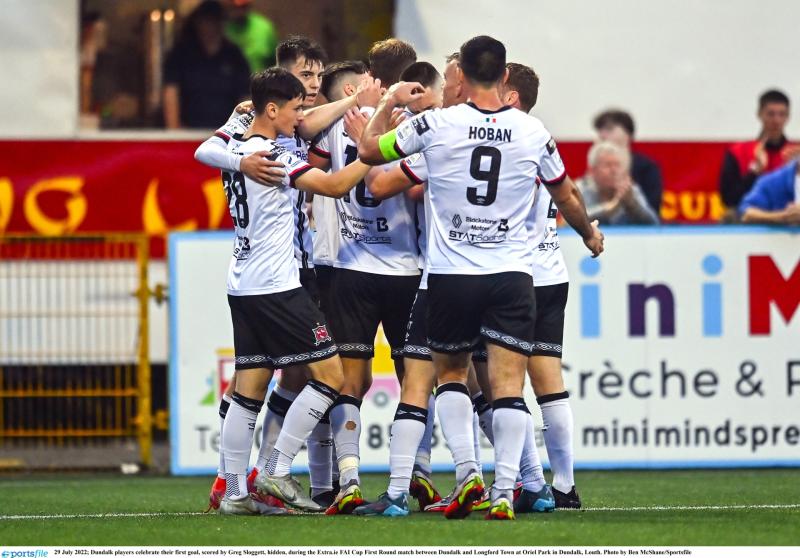 Four goals in a ten-minute spell made sure Dundalk FC will be in the Extra.ie FAI Cup second-round.

Stephen O’Donnell, serving a one-match suspension, would have been frustrated as he observed from the television gantry in the first half, but a second half brace from Greg Sloggett, along with goals from Patrick Hoban and Joe Adams sealed Dundalk’s passage.

“We’re one step closer,” said O’Donnell on his dream of another FAI Cup final. “That was the main goal. I thought first half, we were a little bit lethargic and a little bit flat, but second half, much better, and we put the game to bed in around six or seven minutes.”

Dundalk were dominant throughout and created the first opening inside three minutes when Steven Bradley skipped past the challenge of a couple of Longford players before playing it into Sloggett, but he then scuffed his attempt wide of Luke Dennison’s post.

Hoban thumped a header wide from Keith Ward’s left-field cross, while not long after that, Dundalk skipper Hoban tried his luck once more, skiing an effort miles off target.

Hoban again could have found the net when he volleyed narrowly over after it dropped to him – a chance that arose following some good work from debutant Runar Hauge.

Having only joined The Lilywhites on a loan deal from Hibernian two days beforehand, Norwegian winger Hauge saw his speculative shot go straight into the arms of Dennison.

Indeed, perhaps the best chance of the first half came on 32 minutes through the lively Hauge, whose cross was diverted wide by Ward when it looked easier to hit the target.

Darragh Leahy had a shot from outside the area pushed away by Longford goalkeeper Dennison as Dundalk’s frustrations wore on against their First Division opponents.

Right before the half-time break, Ward floated a corner from the right which was helped on by Andy Boyle to the back post for Bradley, who then proceeded to head off the post.

Dundalk almost broke the deadlock seconds after the restart when Hoban’s cross from the right was flicked on by Ward at the near post, forcing Dennison into a decent save.

Not long after that, a corner from the left by Paul Doyle eventually found its way to Hoban inside the box, but he fired wide, with the visiting team continuing to hang on.

Dundalk’s frustrations grew even bigger when substitute Adams headed off target from close range after an excellent Lewis Macari ball was right on the head of the Welshman.

However, Longford’s resistance was finally broken on 58 minutes when Adams, from Bradley’s neat pass, forced Dennison to push straight into the path of Sloggett to finish.

Hoban hadn’t scored in his previous six outings prior to Friday’s cup tie, and the now 31-year-old flashed a header inches wide after getting on the end of a good Bradley cross.

Much to the relief of Hoban, his drought soon after that miss came to an end on 61 minutes when he blasted a header home following what was a terrific ball from Macari.

“He done very well,” added O’Donnell. “It was a great delivery by Lewis and a good header. Obviously, he missed a couple of weeks. He played well last week I thought against Finn Harps, so he’ll be delighted to get on the scoresheet tonight.”

The floodgates had well and truly started to open at Oriel, and Ryan O’Kane showed great endeavour to get the better of Mick McDonnell before curling narrowly off target.

It was 3-0 on 63 minutes thanks to Adams, who after picking up a Sloggett pass, fired past Dennison from the edge of the box, despite the Longford keeper getting a touch.

Dennison saved from Hoban after being teed up by Sloggett – an opening which was created by the industrious work of Adams, who had dispossessed Dean McMenamy.

From that attack, man of the match Sloggett completed the rout on 68 minutes when he poked home from an O’Kane ball from the left to score what was a first ever career brace.

“Greg is definitely capable of scoring goals. They were a couple of sort of poachers' goals. It’s great for him to get two on the scoresheet. That’d be good for him as well. It’s invaluable.

“(O’Kane) was very sharp. He put it on a plate for Greg for the fourth goal. He done great and looked really sharp throughout. He showed great feet and he’s been progressing really well.”

O’Kane again produced some nice footwork out on the left, wriggling away from Darren Clarke and McMenamy, before pulling it back for Adams, who blazed over the crossbar.

John Mountney and David McMillan both came off the bench, and they combined when Mountney raced down the right before finding McMillan, but he was foiled by Dennison.

Following an incisive pass from Adams, Dennison smothered from John Martin before O’Kane forced the Longford netminder into another stop, but only into the path of Martin, who thought he got Dundalk’s fifth, only for it to be ruled out for an offside.

After O’Kane had drawn a foul, McMillan floated a free-kick wide on 88 minutes – marking the final effort of what was an easy start to this year’s FAI Cup for Dundalk.