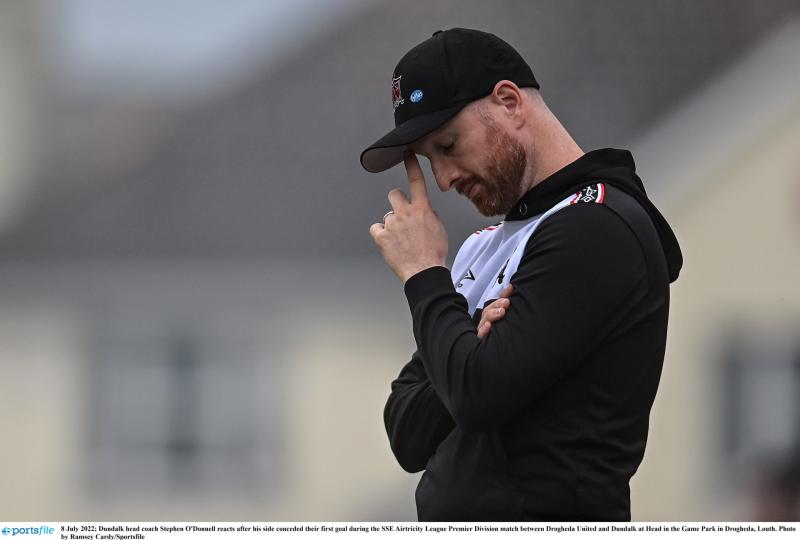 There were no excuses used by Dundalk FC head coach Stephen O’Donnell after The Lilywhites saw their ten-game unbeaten run in the SSE Airtricity League come to an end.

For the second time this season, O’Donnell’s side succumbed to a frustrating 1-0 defeat at Head in the Game Park in the Louth derby against near neighbours Drogheda United.

As was the case when the sides met at the same venue back in March, it was Dean Williams who netted the decisive goal – only this time it was scored after just 53 seconds.

“We went 1-0 down obviously so early,” O’Donnell told The Democrat after the game last Friday night. “We got in lots of good areas, but our quality wasn’t good enough in the final third. It is disappointing. There’s no getting away from it.

“Obviously it’s a setback, but you have two ways of looking at a setback – you still have the full game to recover. That’s the way it is. You’re going to concede early goals throughout your career and that. It’s just how you react to it.”

A no-nonsense midfielder in his playing days, O’Donnell showed after 18 minutes that he can still make a tackle after trying to retrieve the ball from Gary Deegan on the touchline.

Despite the infringement, the Dundalk boss wasn’t among the names added into the book of referee Neil Doyle, who dished out a total of seven yellow cards on the night.

Six of those came in the first 45 minutes, but O’Donnell didn’t believe the Dubliner’s fervent officiating impacted the quality of a match witnessed by over 2,000 spectators.

“That’s not the reason we lost,” he added. “I have no qualms in that regard. It’s just disappointing as you said. We had more than enough territory and got in enough good areas to make it count and we didn’t.”

Despite suffering their third defeat out of 22 fixtures, Dundalk remain in second place with a game in hand but are a challenging ten points behind Shamrock Rovers in first.

Next on the agenda is a return to Richmond Park for O’Donnell this coming Friday night, as The Lilywhites take on European hopefuls St Patrick’s Athletic (kick-off, 7.45pm).

A second loss in as many games would reduce Dundalk’s cushion between themselves and St Pats to just three points in the race for Europa Conference League qualification.

Playing more than half-an-hour last Friday night was Patrick Hoban, who had been out for two weeks after sustaining a slight injury to his quad, while John Martin is also available for selection after an ankle problem kept him out of the defeat in Drogheda.

O’Donnell also offered a fresh update on John Mountney, who is yet to feature in 2022.

“Pat was back the last couple of days. That was a positive, but it’s more about the team. We’re disappointed as a squad and as a group, but as I said, you’re going have setbacks throughout the season. Tonight’s one of them and we’ll go again.

“John (Mountney) got 90 minutes under his belt last week in an U19 game. He’s getting there now. He’s had a bit of a stop-start with different types of setbacks, other than the cruciate, since he’s come back, but he’s getting stronger and stronger.”

However, goalkeeper Nathan Shepperd is a doubt for Friday night’s fixture in Inchicore after he sustained an injury to his shoulder towards the end of the defeat to Drogheda.

Robert Hennessy (Limerick) will be the referee for the meeting of St Pats and Dundalk. It can be watched live via the LOITV online streaming service for a one-off price of €7.