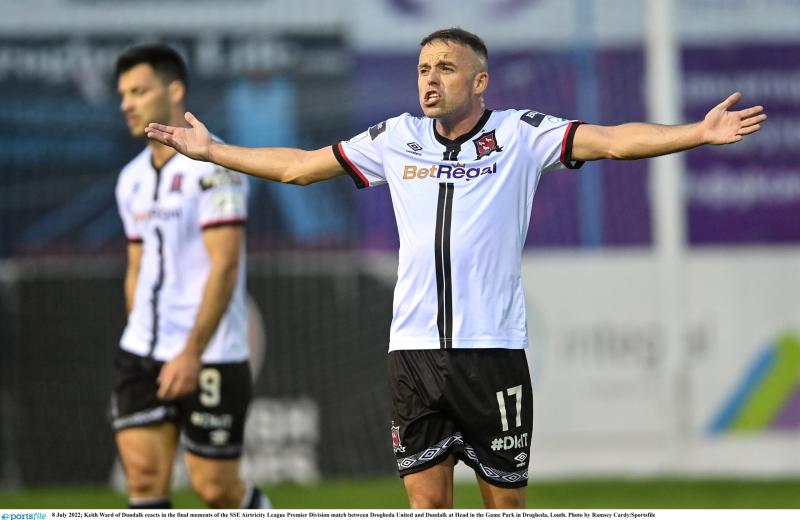 History repeated itself at Head in the Game Park on Friday night as Dundalk FC were defeated 1-0 by Louth neighbours Drogheda United in the SSE Airtricity League.

As was the case when the sides last met at the same venue in March, it was Dean Williams who bagged the decisive goal to claim another famous home win for Drogheda.

Indeed, the hosts took the lead inside the opening 60 seconds, with Evan Weir getting away from Lewis Macari before a cross into the box from the Drogheda left-back wasn’t defended by Andy Boyle – allowing Williams to turn and finish into the top corner.

Reeling from that early concession, Dundalk’s first attempt arose on three minutes when a Darragh Leahy free-kick was headed over the top of the crossbar by David McMillan.

McMillan was again in the thick of the action after he met a Daniel Kelly cross at the back post, but the Dundalk frontman could only hook his effort off target from close in.

A long punt up the pitch by Mark Connolly was scuffed wide by Kelly’s first-time volley, while five minutes before the break, the Dundalk winger curled an effort miles off target.

A well organised Drogheda were offering little going forward, but looked dangerous on the counter-attack as Dundalk searched for a leveller throughout a frustrating evening.

Drogheda’s resistance continued into the second period, with Robbie Benson, in space, having a powerful shot from distance deflected over the top by the head of Keith Cowan.

Kevin Doherty’s side could have had a second, though, when Williams forced a good save out of Nathan Shepperd after the Drogheda forward was slipped in by Darragh Markey.

The menacing Markey diverted wide after wriggling away from Kelly, while at the other end, the Dundalk winger, racing through, fired straight into the hands of Colin McCabe.

Try as they might, The Lilywhites couldn’t force an equaliser – instead, it was Drogheda who almost doubled their advantage in stoppage-time when Darragh Nugent fired wide.