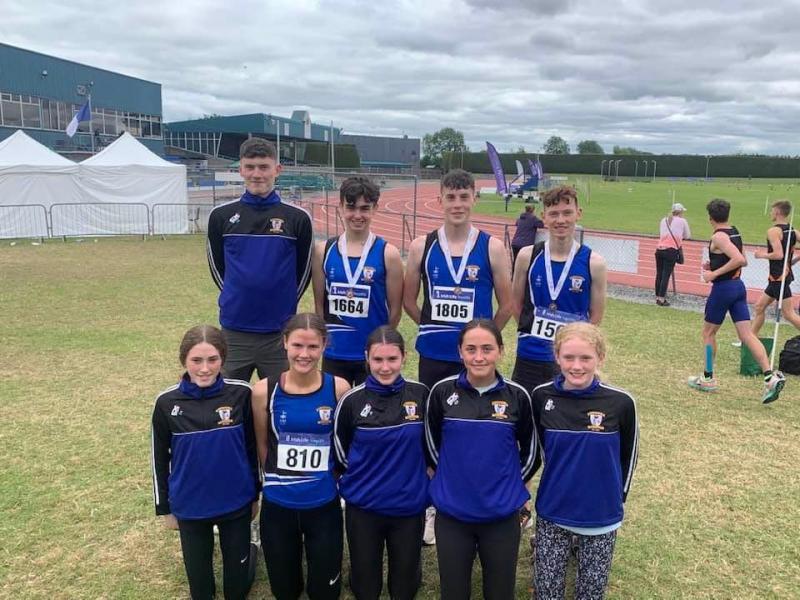 The National Juvenile Track and Field Championships took place at Tullamore and day one ended up being a fantastic day for St Peter’s AC, as the club came home with three National medals.

Rory McLoughlin was the first of the St Peter’s Athletes to climb the rostrum when he won his first national outdoor track medal, a bronze in a keenly contested U19 800M Final.

Rory suffered disappointment last year when he finished in fourth place, but he was determined in his last national juvenile Championship not to leave without a medal and claimed third in a time of 1.56.02.

Live Sport on TV this weekend

Sean Reilly had to come through a very fast heat to claim his place in the boys U17 800M final. With just three automatic places up for grabs, Sean had to qualify as a fastest runner up as he was fourth in his heat. However when it came to the final it was a totally different story.

The first lap in the final was a comfortable pace with all eight finalists still in contention. A group of four broke away with Reilly at the back of the lead group. He dug deep in the last 100M and managed to get himself into third and hold on for the finish in a time of 2.03.23.

The final race of the day was the boys U18 800M which proved to be the icing on the cake for the club from Dromiskin.

Having already secured two bronze medals, the large contingent of St Peter’s supporters were about to be in dreamland as another of their athletes was about to win a national medal and this time it was Gold. Cian Gorham for the second year in succession.

Gorham had earlier won his heat which had to be faster than he would have liked, while the final was a real battle from start to finish.

Cian had to call on all his experience to hold off his nearest challenger right to the finish line to win Gold for the second year in a row and become national Champion again in a time of 1.56.94, completing a day that will live long in the memory of those St Peter’s supporters in attendance.

Earlier in the day Niamh Brady ran in the girls U18 800M final which proved to be a real tactical affair in what was a straight final. Niamh had a strong run but unfortunately was outside the medals.

Judith Bell took her place in her heat of the U18 100M hurdles and gave it a real good effort and narrowly missed out on a final place.

Niamh Allen made her national juvenile Championship debut also when she competed in the U13 Long Jump. She managed to jump 4.15M on her last jump and although disappointed at the time, the experience will stand Niamh well in the future.

This weekend sees days 2 & 3 of the National Championship taking place. The club will have two more athletes in action with Judith Bell competing in the U18 Long Jump and Dearbhla Allen taking her place in the Girls 3000M and 1500M events.