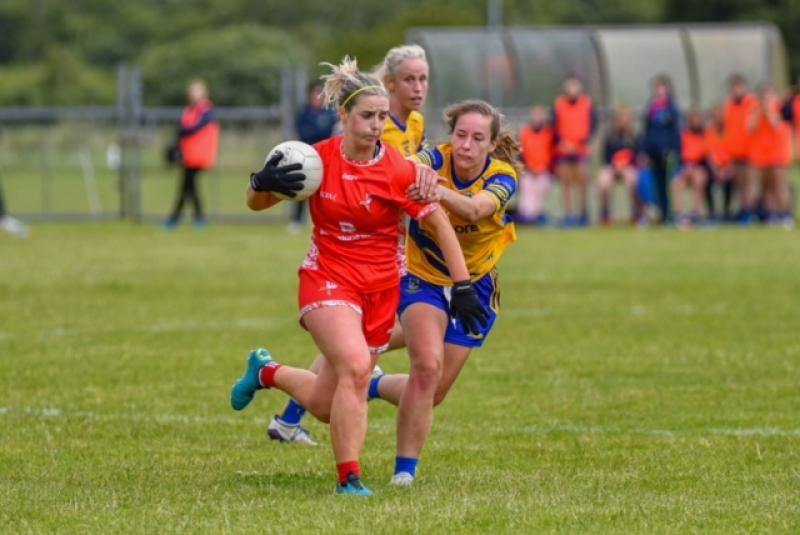 Despite a trojan effort from every woman in a Red Shirt on Sunday, it just wasn’t to be for the Louth Ladies as they failed to turn enough of their chances into scores.

Yet despite what the scoreboard suggests, The Wee County were right in the contest for large periods as they bombarded the Roscommon defence. In the centre of many of those descents on the post was Laura Collins, who left the field feeling they had a lot more to give.

“I think the only team that beat us today was ourselves” admitted the corner forward. “I know the score line shows that they won by a good margin but a lot of our mistakes today, we caused them.  Their goal along with other chances we gifted them.

“We felt afterwards that we left a lot out there on the pitch, I suppose they were just more willing to go in for the dirty ball today and we sort of slacked a bit in that regard. But we are very disappointed.”

Yet when you break it down, the stats show exactly why it was the Girls from the West that progressed to the next round. Louth converted a little under 30 percent of the chances they created whereas Roscommon finished with a conversion rate a shade over 70 percent.

The Newtown Blues clubwoman was aware of their frailties in front of the posts, while also admitting it was their mistakes that led to Rossie scores, most crucially the vital goal just before half time that gave their opponents a cushion they never relinquished.

“The Ball was breaking down a lot around the 40-yard line, mostly from fumbles. It was a wet day, but there are no excuses. We should have been more clinical, got off the shoulder a bit more. We probably lacked that part of our game today.

“The goal came off one of our missed chances, as we put the ball wide. We were probably a little naïve, watching the ball, going wide rather than setting up ourselves. But again, it comes down to us, we let them through, we were the ones asleep for that goal. We only have ourselves to blame.”