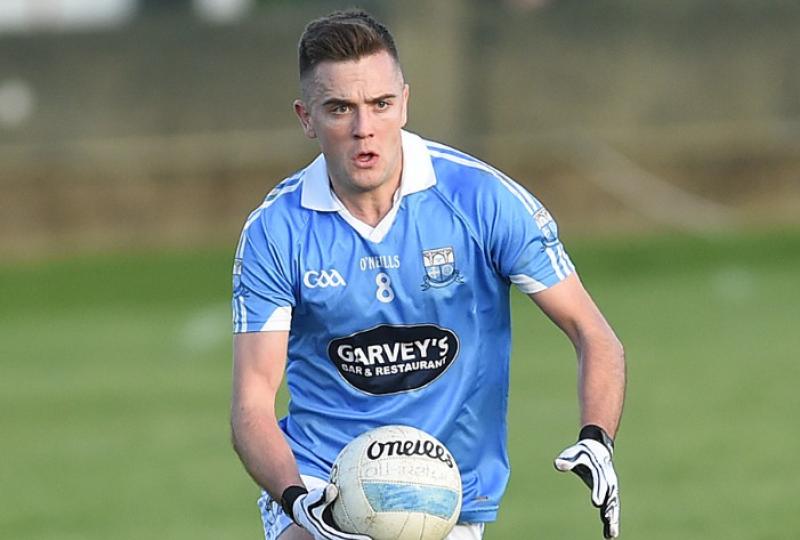 Hollywood Developments Division One Round Nine

St Marys continued their good run of form with another victory, this time over Sean O’Mahonys at the Point Road on Saturday evening.

Daire McConnon was the man in form for the visitors as the Louth player ended the game with a personal tally of 2-3, to help keep his side in touch with the Division 1 leaders. In an entertaining first half, McConnon scored his side’s first goal while Darren Clarke added a second.

However, it wasn’t enough to bring an advantage into the break as the O’Mahonys were in fine scoring form themselves and they fired in three goals to ensure the teams went in at the break level at 3-3 to 2-6.

However, the home side was unable to sustain their efforts in the second half as they could only manage to add three further points to their tally.

Meanwhile, St Marys continued their momentum as McConnon added his second goal, while they managed a further eight points to ensure they eased to victory.

A magnificent save from Martin McEneaney in the closing stages saw St Patrick’s hold out for victory at Lordship on Friday evening.

With just two points between the teams entering the dying moments, Paul Clarke’s effort looked destined for the net, but the Pats keeper was equal to the task to ensure that his side claimed another important win.

The home side made the brighter start and had the first four points on the board through Gavin Gregory (2), Jack Murphy and Ross Murphy before the Gers hit back with two.

The next four points were shared but the Pats finished the half on top and added scores from O’Connor and Jack Murphy to lead by 0-9 to 0-5 at the interval.

The Lordship men extended the gap to five points thanks to another O’Connor strike, but the Gers came storming back when they replied with a point before a stunning Jim McEneaney goal on 45 minutes reduced the deficit to just one.

The game was very much in the melting pot; however it was home side that grabbed the initiative once again thanks to successive scores from Cathal Grogan, Adam Finnegan and O’Connor to lead by four once again.

The visitors hit back with two late points but were denied a dramatic victory thanks to McEneaney’s excellent save late on.

Mattock Rangers and Newtown Blues played out an entertaining draw in Collon last Thursday night in the refixed Round 8 clash. Liam Flynn was the hero for the home side as his late point from a mark ensured that the hosts claimed a share of the spoils.

With both sides playing a refreshing brand of open football, scoring chances were plentiful as points were traded for much of the half. Alan Connor struck the first major blow when he found the net for the Blues but almost immediately Oisin McKenna hit back for the hosts to see his side lead by 1-8 to 1-6 at the break.

The Collon men went three clear at the start of the second half but John Kermode levelled the game when he added a second Blues goal.

The visitors kicked on from that stage and looked to be on course for victory when Ciaran Downey also found the net to increase the lead to four entering the closing stages. However, Cathal Fleming pulled a goal back for Mattock before Flynn landed the equalising score.

Newtown Blues showed no ill effects from having to play their second game inside four days as they easily accounted for Naomh Mairtin on Sunday afternoon.

Having defeated Mattock Rangers on Thursday, the Drogheda men continued their unbeaten start to the campaign as they moved three points clear of a St Mochtas side who were not in action over the weekend.

The Mairtins form has been disrupted by the loss of players to the county panel and they would have been hoping to test the league leaders on this occasion. However, they produced a disappointing display with just Jack Murphy and Tom Gray finding the target over the hour.

The Blues were able to continue their fine run of form and at the end of the first half were well on their way to victory. Rob Carr scored the only goal of the game before the break to help establish a 1-5 to 0-1 interval advantage.

The Mairtins did improve in the second half and added three points to their tally, but the Blues were never troubled and kicked five points to secure a comfortable nine-point win.

Cooley Kickhams made it a worthwhile trip to Clogherhead on Saturday evening as they returned home with two vital points.

It wasn’t looking good for the visitors at the beak as they trailed by five points, but an impressive second half display saw them gradually claw back the lead before they went on to secure their second win of the season.

Cian Connor and Brian White were in fine form in front of the posts as they both finished with four points on the night. The first half belonged to the Dreadnots as they twice found the back of the net through Jay Hughes and Peter Kirwan to build up a healthy 2-4 to 0-5 advantage.

However, the second half saw the visitors find their rhythm in attack with Patrick Johnston and Enda O’Neill also contributing vital scores. The Cooley defence played their part as they restricted the Dreadnots to just three points after half time to help them secure the win.

Inside Track: You drive for show and putt for dough – now for more than ever before

Second half goals from substitute Kevin Hearty and Kieran McArdle secured a welcome away victory for St Brides over St Fechins at Beaulieu. The win was the Knockbridge men’s first victory in three rounds and keeps Declan McCoy’s side in the top six of Division 1.

The first half was a low scoring affair. There was only one point each registered by the tenth minute. However, the Termonfeckin men went in at the interval 0-5 to 0-4 to the good, which was no more than they deserved with Ronan Holcroft and Niall Devlin to the fore.

The tempo of the match increased significantly after the restart and both sides were all square on 36 minutes at six points each. The visitors went through a purple patch to edge the game in their path when they scored two goals in as many minutes from the impactful Hearty and a sensational effort from full forward McArdle.

Ryan Walsh reduced the deficit and kept his side in touch but the damage was done and try as they may, the men in the white and green couldn't find the goals they needed.