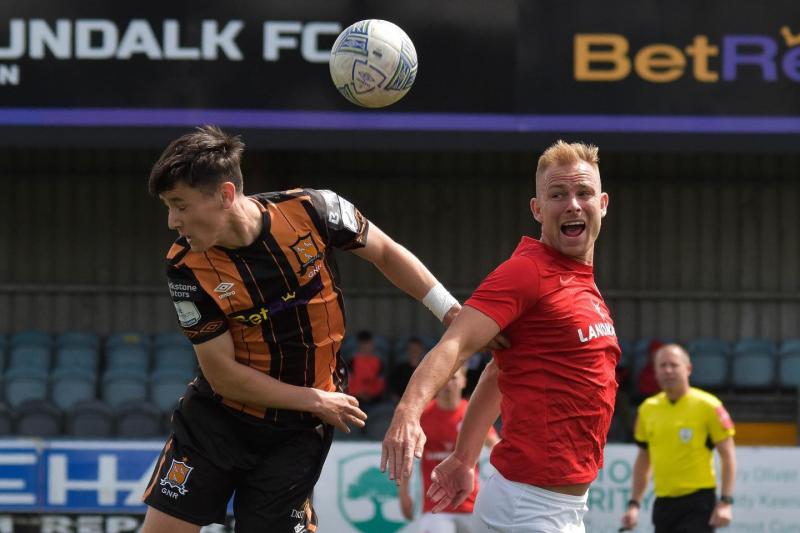 An action shot from yesterday's meeting between Dundalk and Larne in Oriel Park. (Photo: Larne FC)

Dundalk FC continued on the winning trail in a mid-season friendly at Oriel Park on Saturday afternoon, defeating Irish League outfit Larne 2-1 in front of a modest crowd.

Played less than 24 hours after the crucial 1-0 SSE Airtricity League victory over Shamrock Rovers at the same venue, Dundalk offered some non-regulars, along with a host of underage talent, crucial minutes under their belt in what was a useful exercise.

Larne recently finished fifth in the NIFL Premiership and were beginning preparations for a Europa Conference League qualifier against St Joseph’s of Gibraltar next month.

A couple of familiar faces featured in their starting line-up on Saturday, including former Dundalk winger Daniel Kearns and Mark Randall, who made 13 appearances for Arsenal.

Against a youthful Dundalk side, Larne created the first opening inside ten minutes when Peter Cherrie had to make a great save with his feet from a Shea Gordon attempt.

At the opposite end on 13 minutes, the menacing Ryan O’Kane was causing problems and got in between the Larne defence, but Rohan Ferguson was equal to his effort.

Veteran goalkeeper Cherrie, who turns 39 this year, showed his undoubted class as he made two quickfire saves to deny Leroy Millar and then Ben Doherty just seconds later.

However, the Scotsman could do nothing about Larne’s opener on 19 minutes, with ex-Derry City player Doherty whipping in a cross which was headed home by Lee Bonis.

The game slowed down after that, with Bonis seeing his lobbed attempt drift well over the top, while at the other end, Mayowa Animasahun had a header hooked off the line.

Dundalk levelled matters on 44 minutes when a beautiful cross from left-back Mark Hanratty was headed beyond Ferguson – almost in slow motion – by John Martin.

Cherrie made another three saves early in the second half, the best of which saw him push the ball away when Dylan Sloan unleashed from distance after finding himself in space.

The Lilywhites were given an opportunity to go in front on 63 minutes after O’Kane drew a foul inside the box, but David McMillan crashed the resulting penalty off the crossbar.

The hosts emptied the bench in the second half, making a raft of changes, the most notable of which was Luke Mulligan, who is still young enough to play for the U15 team.

Larne themselves could have taken the lead from the spot after Emmanuel Adegboyega fouled Matty Lusty inside the area, only for Andy Mitchell to blaze over from 12 yards.

The Commentary Box: Personnel and formation changes vital if Kenny is to survive

The Invermen were made to pay for that miss as Dundalk won it on 72 minutes thanks to McMillan, who atoned for his earlier penalty-miss, finishing well after being slipped in by Anthony Moyo, who had done brilliantly to retrieve possession in a dangerous area.