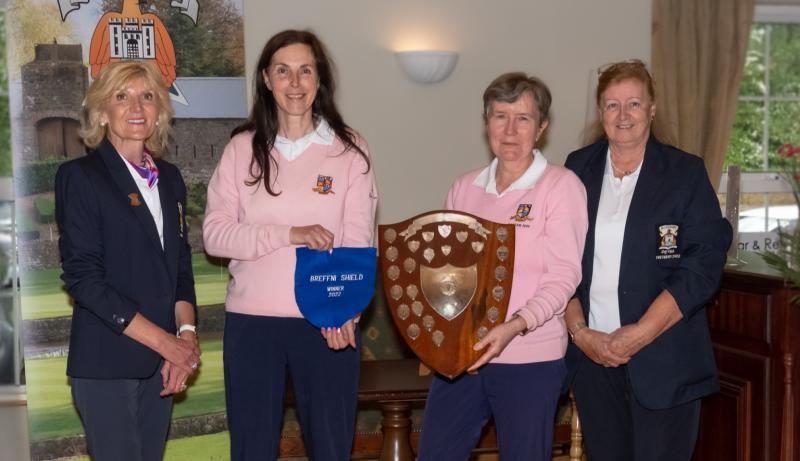 Mark Costello took home the May Medal after an impressive score of 67 nett. Mark played some great golf over his round and held off Dylan McEnaney by one shot to get his hands on the much sought-after Monthly Medal.

Dylan, although he came up agonizingly short, can be very happy with his round of golf. Noel Prendergast took 3rd spot with a nett 70 after his steady round.

The gross winner is no stranger to picking up wins. Mark Lambe opened and closed his front 9 with birdies on hole One & Nine for a 1 under front and finished the back 9 with a very stress free 9 pars to shoot a fantastic one under par 69. Well done Mark super shooting once again.

The Club President Deanna MacGuinness's Prize to the Seniors took place on Tuesday 24th May. Despite a forecast of blustery showers, a good turnout of players played the nine holes.

The winner Michael Johnson had a bad start and finish, but five pars and two bogeys in between led to a score of 20 points. John Hanratty had a very steady round resulting in 18 points. Seniors’ secretary Joe Mullen took third with 17 points. The seniors would like to thank President Deanna for her generosity to them.

Some players have the right mindset for stroke, some don't like it much at all.  Few are better suited than Bridie Fitzmaurice who kept things cool and steady and hardly put a foot wrong to bag this week's win with 73 nett.

On 75 nett, three players lay two behind with Angela Evers' superior back nine earning her second place and relegating Lady Captain Siobhan Downey into third spot.  Birdies were a rare species this week with one bagged on the 12th hole and a great 4 holed on the 4th. Many thanks to this week's sponsor, Marron Electrical.

The Breffni Shield was started in Cavan by the late Dorrie Smyth, a low handicap golfer who had a genuine interest in promoting social golf. It was then confined to the Cavan area but after the war it was decided to open it to many clubs.

Mannan Castle were delighted to host the Regional Final of the Breffni Shield this year and welcomed ladies who qualified for this event from seventeen clubs.

Many were complimentary of our course, a huge thanks to our greenkeeping staff under the guidance of Head Greenkeeper John McBride and of course our band of volunteers who do fantastic work as well.

Compliments to the restaurant and bar staff, Chef Tommy and Amy and your staff were brilliant as always.
To all the ladies who volunteered to make the day run smoothly, thank you.  The weather even co-operated; thankfully the rain and hailstones didn’t start until the golf ended.

The overall Best Nett Pair were the mother/daughter pair from County Cavan Caroline and Megan Griffin Keane who had a fantastic score of 63 nett.

A good turnout came for this nine hole Rockmount qualifying competition, played over the front nine holes. Congratulations to the winner, one of the newcomers to Mannan Castle, Marie McKeown whose playing handicap for this competition was 17, bringing in a fantastic from score of 18pts.

Runner up Jo Morris was one shot behind with 17pts. Jo is playing consistently good golf these days, playing off 8 for this competition.

Marie will now go with the winner of the men’s same competition to play in a qualifier in Rockmount GC on Tuesday 21st June. The outright winner there will then go on to play in St Andrews in July.

Congratulations to our AIG Minor Cup team captained by Mary MacNamee, who won 3/2 against a very tough (but a lovely bunch of ladies) from Clandeboye Golf Club NI team. All matches were very close with one finishing on the 21st hole.  These ladies are now through to the third round of the competition.