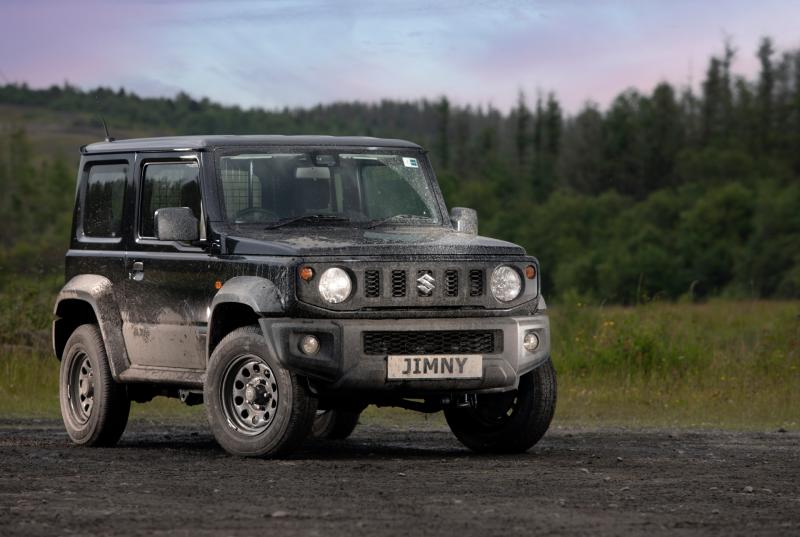 Mobbed. Literally mobbed. I can’t remember a car creating so much interest in my time testing cars. Everyone wanted to chat about it, sit in it and be taken for a drive in it.

It stirred something in them powerful enough for them to breach their natural reservedness and approach me.

I couldn’t go anywhere and it is not surprising. Just look at it.

The word cute was made for it. It’s chunky, chiseled looks hark back to an older time in car design but yet still looks modern.

The obvious design cue is the Mercedes G-Wagen but that’s too simplistic, as it remains faithful to previous Jimny models dating as far back as 1970.

The design sticks to two doors and in this commercial version a separate fenced off cargo area. There are some snazzy colours available from the limited availability that Suzuki Ireland have.

I had one in white that grew on me and I think I’d opt for it for the full UN peacekeeping effect.

I’ve been told stories of old Jimnys being prized and snapped up for offroad farm vehicles instead of quad bikes because they are more weatherproof, can carry the payload enclosed and has incredible offroad capability being, most importantly, light.

So, now that I have access to a farm that has “farm roads” as soon as I collected it I made a call to see if it was OK to visit and headed straight there.

I was giddy with excitement in anticipation of my imaginary jungle trek in a field near Kilcock! Select 4WD and into the fields I go.

There was no other thought in my head other and me the Jimny and how to navigate the muddy tracks. Forget, mindfulness, this is true in the moment stuff.

I don’t think I could have been happier with the keys to anything else. Or its performance.

Two up and an empty 863ltr cargo area the car felt it could go everywhere.

The amount of power available is adequate for the expected passengers and payload and its ability to negotiate the muddy field and road ruts was unquestionable. I’d love to take this on a real safari adventure.

Inside is expectedly functional but it is not spartan. All the expected safety and in-car entertainment features are there apart from reversing parking aids that it needs.

It is refreshingly different and the inside again feels like from an older age that I really liked.

It has that feeling of going back to when we had it right and I love the switches, dials, knobs and all the good stuff. Touch control?

So yesterday and in the Jimny retro is back and back big.

Practically there are limitations. Not for the car but the front seat occupants. If you are tall getting the seat position correct is a challenge and I’d say being shorter than my 173cm is desirable.

The reason is because the seat can’t go back very far and you have to jiggle it to move the seat forward and then angle the backrest backwards.

Sounds cumbersome but is easy once you figure it out.

Also being a two seater, in commercial guise limits the potential proper buyers. Suzuki is not bringing in the passenger version to Ireland and even withdrawing it in Europe because of emissions.

I have seen a few of them that are imports from the UK.

I can’t figure out how Suzuki can’t do it. They have a fabulous small 1.0l boosterjet petrol engine that would be perfect for the Jimny to assist meeting targets.

I won’t begin to lecture them on how to sell cars but this car is the Fiat 500 of 4WD motoring being, importantly, highly desirable.

I was expecting the ride to be jiggly and bumpy on main roads but it wasn’t and the ride, whilst not car-like, is livable with.

Sound insulation is fine but if you have any intentions of pace and speed look elsewhere.

This is for responsible, practical and functional driving.

That doesn’t translate into economic driving because I managed 6.9L/100km which maybe, on reflection, isn’t that bad for a 4WD, 1.5L offroader.

The cost for this commercial vehicle starts at €20,995 with the only option being single or two-tone paint.

If this car fits your requirements I’d go so far as to say that is the best motoring bargain available in Ireland at present.

In the list of cars I want to own the Jimny now joins the Fiat 500 Lounge in Cha Cha blue and the blue Suzuki Swift Sport.

That’s two Suzuki’s now. They make fab, fun and functional cars and I for one do give an F for them.

Find out next week.

33,151 arrivals from Ukraine in Ireland by the week ending 22 May 2022
ADVERTISEMENT - CONTINUE READING BELOW