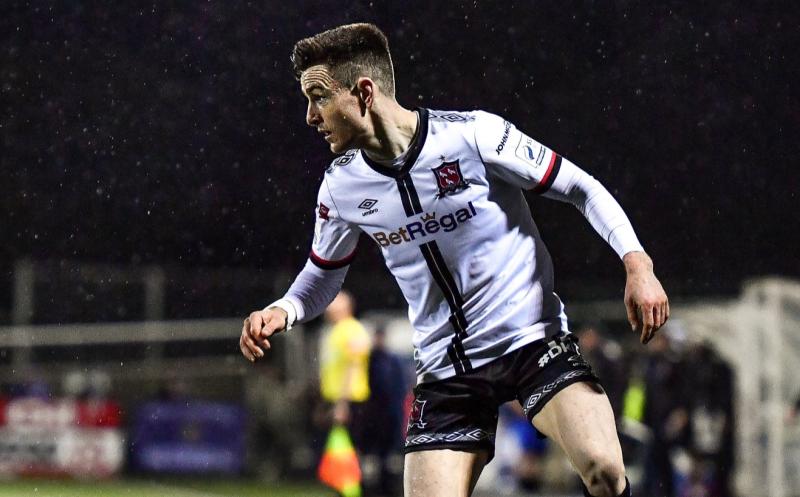 Darragh Leahy was happy to finally get off the mark in the 4-1 SSE Airtricity League win over Drogheda United after more than two seasons without a goal for Dundalk FC.

The 24-year-old left-back had never previously found the net for The Lilywhites in over 50 appearances but managed to score twice in Friday night’s Louth Derby at Oriel Park.

“It’s another three points and we move on,” he said afterwards. “It’s three points in a derby, so we’re all delighted, but it’s only three points. You don’t get extra points or anything like that, so we will just get on with it and move on.

“I think we’re obviously still unbeaten at home. We’ve won the last four at home, so we’re just trying to make this place a fortress again like I think it was back in ’16, ’17 and ‘18.

“Last year, teams were probably coming here thinking they could turn us over, but we’re still unbeaten and trying to make it hard for teams to come up here.”

Before his double salvo on Friday night, Leahy had last rippled the net for former club Bohemians in a 2-0 FAI Cup win over Galway United at Eamonn Deacy Park in 2019.

“It was my first two goals for Dundalk,” he added. “I got two at Bohs and then two again there. It’s actually funny, before the game, Wardy was saying to John Martin, ‘It’s like a bus, you don’t score often and when you do, two come around at once’ and I went off and got two there, so I’m delighted.

“It was a long time coming. Last year, I could have had a few. I suppose I’ve started a little streak now or something else. I’m happy to get two goals.”

A dramatic 2-1 win for Dundalk over Shelbourne the previous week was followed by their thrashing of Drogheda, but Leahy insists the belief to go on a run of form has always existed within the squad, with a trip to UCD next on the agenda for The Lilywhites.

“We obviously have the belief. It’s obviously nice the way we won it in the end (against Shelbourne), so I guess it did help, but we always do believe that we are going to win, especially at home.

“We’ve UCD and then Bohs at home, so hopefully we’ll get another three points and just keep momentum going. As you see in this league, if you get two or three wins on the bounce, you can shoot right up the table.”