Joe Carroll: Louth must raise their game to have a chance of beating Kildare 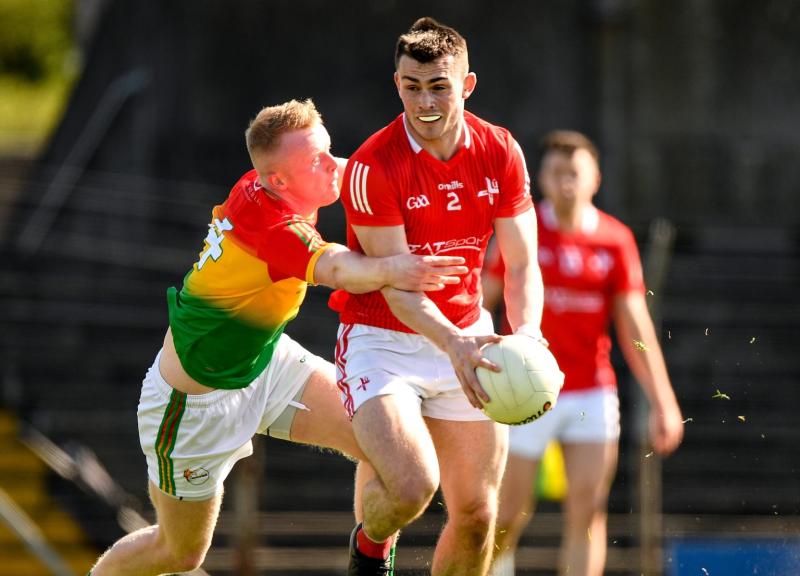 Dan Corcoran is tackled by Conor Doyle of Carlow during the Leinster Senior Championship match at Páirc Tailteann in Navan. (Pic: Sportsfile)

As a pipe-opener for next Sunday’s bigger test, Louth’s rout of Carlow at Navan on Sunday last did the trick; but although it yielded an impressive 5-10 and there was a huge breeze between the sides at the finish, this wasn’t a flawless Leinster Championship performance.

Carlow weren’t good, just as they weren’t in the recent league. By finishing second-last in Division Four, the south Leinster men had 31 counties ahead of them in the all-Ireland table.

It may be that they wanted to drag Louth down to their level in the hope of maybe scraping a win from the resulting scramble, which this was. Certainly in the opening half they didn’t seem to want to come out to play, preferring to try to keep the ball away from their wind-assisted opponents rather than try to build a score.

The game had opened with Carlow stringing dozens upon dozens of passes together, turning back more often than going forward and holding possession for up to three minutes.

And if you think that’s not long, think of all that happened in that length of time as Mayo tried to peg back Galway in the Connacht Championship. It was only in the second half that Carlow really tried to put any kind pressure on the Louth defence.

But nothing on offer here, either. Even before Louth added three goals in the final quarter to their first half’s brace, hapless Carlow were a beaten docket, left with only the first-round draw of the Tailteann Cup to keep their summer thoughts alive.

Sam Mulroy, as always, contributed handsomely to Louth’s win, scoring a couple of goals and playing a part in the build-up to the other three. The best of the five came from Conor Grimes, a beautifully angled shot from the right.

He showed in this game that free of injury, the Glen Emmets clubman has a huge amount to offer, not least important of which is his sharing of the load with Mulroy. The pity is that an ankle injury might prevent Ciaran Byrne from throwing in his tuppence worth at O’Connor Park on Sunday.

If it’s still important in the game as it’s played today to have tall, high-catchers at midfield, Louth couldn’t be better supplied than right now.

Arguably the tallest combination to wear the red jersey since Seamus O’Hanlon and Ken Reilly, or before that, Packie O’Connor and Davy McDonnell, Tommy Durnin and Conor Early are better than good in the air, and when a chance presents itself, Durnin can put it away, just as he did in the league and again on Sunday.

All of the team’s qualities will have to come to the fore on Sunday. There’s a much different proposition facing Louth in Tullamore than there was at Pairc Tailteann.

Kildare may have failed to hold their position in Division One of the league, but they were mixing it with the very best over the spring months, claiming a notable and rare win over Dublin among their point-scorers. Indeed, it may have been this early season defeat that also set the Dubs on the rocky road to relegation.

Of course Louth must raise their game, and no-one knows that better than Mickey Harte. It will take nothing short of a one hundred percent effort to secure victory and a place in the semi-finals. There could be some help to be found among the omens.

The last time the counties met at this stage, Kildare, coached by Kieran McGeeney, were raging hot favourites, but came a cropper in a Pairc Tailteann thriller. That was in the 2010 campaign, and Louth, who had beaten Longford – managed by current Kildare boss, Glenn Ryan – in the opening round, had, as now, a strong Ulster influence in the management team.

It was said by one of the players that the talk McDonnell gave at the Thursday night training session before the Saturday afternoon meeting with Kildare “made the hair stand on the back of our heads”. No one better than Harte or his sidekick, Gavin Devlin, to come up with the right words this time.