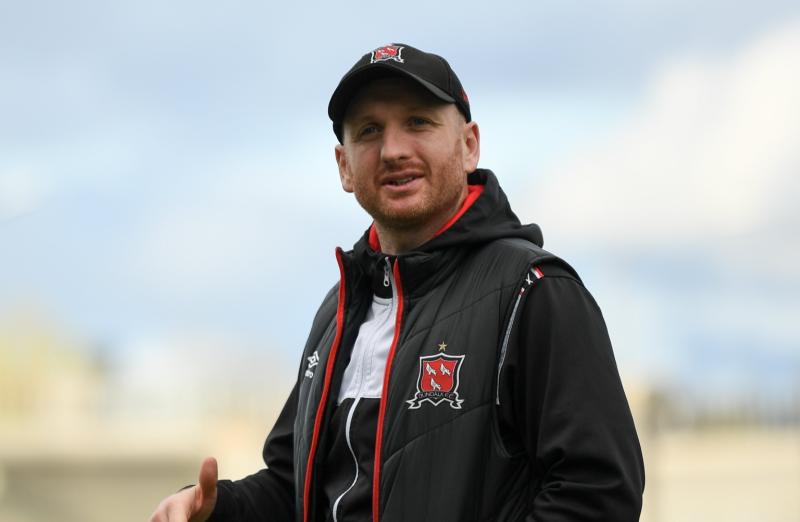 Stephen O’Donnell praised the character of his team after witnessing Dundalk FC score an 85th-minute winner to beat Shelbourne in the SSE Airtricity League on Friday night.

It looked as though The Lilywhites were heading for a seventh draw in 12 matches after Shane Farrell’s penalty nine minutes from time had cancelled out Daniel Kelly’s opener.

However, Dundalk were not to be denied the three points, with John Martin’s first goal for the club since signing from Waterford proving decisive as O’Donnell’s side kept the pressure on St Patrick’s Athletic and Sligo Rovers in the race for European qualification.

“We can play better,” the Dundalk head coach told local media afterwards. “From defence and midfield in the first half, I thought we had full control of the game. We had good quality and then we probably needed to penetrate more and ask their defence more questions.

“Second half, we didn’t start the half well. When it went 10 v 10, I thought we were actually very good and controlled the game when we went 1-0 up. Then obviously we get a penalty given against us, so I’ll have to watch that back.

“You could say Shels had all the momentum with us getting Stevie (Bradley) sent off second half and then them getting a penalty, but we showed brilliant character and personality to come back and win the game. Our quality of our two goals from two crosses were excellent and brilliant finishes.”

Martin’s dramatic winner came just moments after the Kilkenny native was introduced from the bench, with the assist being provided by another substitute in Keith Ward.

However, O’Donnell wasn’t taking credit for any such tactical masterstroke on the night.

“I wanted to be more offensive,” he added. “I wasn’t happy with a point and decided to go 3-4-2. We’ve had enough draws, so I wanted to be attacking. When we’re at home, I’ll always be offensive and want to go after the game. Sometimes it works and other times it doesn’t.

“You would think Shels might have had the bit of momentum, but we showed two really good bits of quality in the delivery and the header. It’s a great win and a win that will bond the team and the fans.”

A blot in the Dundalk copybook on an otherwise positive night was the dismissal of Steven Bradley, who got a straight red card for lashing out at Shels midfielder Farrell.

The Scot now picks up a one-match suspension as a consequence of that sending off.

“It looked innocuous enough,” said O’Donnell. “I don’t think the ref saw it, I think the linesman gave both decisions. He gave the penalty and the sending off, so I’ll have to see it back. I’ve not seen any of them back, so I don’t know. They could probably have arguments about their sending off as well.”

By defeating Shels, The Lilywhites responded to losing 1-0 to Shamrock Rovers in Tallaght just four days beforehand – a game for which O’Donnell made five changes.

However, the Dundalk head coach defended his own decision to rotate the squad.

“I was happy with a lot of Monday night’s game. Shamrock Rovers went to Bohs and won 3-1 tonight. We were after losing two players on the Friday – Robbie (Benson) and Dan (Williams).

“Three games in a week is tough, so it’s important to have boys with energy on the third leg of it. It’s not necessarily the second game, it’s the third game that can become tricky from an injury point of view and also a freshness point of view, so we made changes again.

“I’ve no qualms with any eleven I pick. You saw that tonight in regards Keith Ward’s impact, John Martin’s impact and Davy (McMillan) when he came on.”

Dundalk’s are at Oriel again this coming Friday night (kick-off, 7.45pm) for a fixture against Louth rivals Drogheda United, who were beaten 3-2 in Sligo over the weekend.