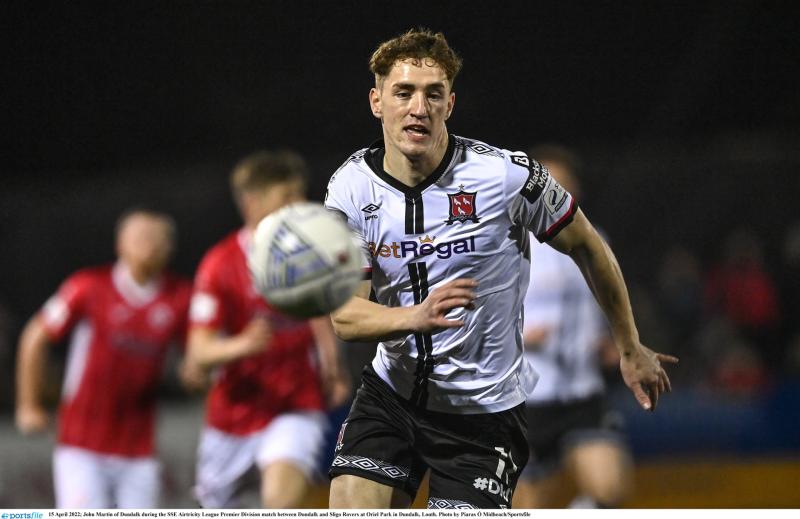 John Martin grabbed the decisive third goal of the match to bag a vital victory for Dundalk. (Pic: Sportsfile)

There was late drama as Dundalk FC beat Shelbourne 2-1 in the SSE Airtricity League.

Daniel Kelly’s third goal in as many games at Oriel Park put Dundalk ahead on 64 minutes, only for Shane Farrell to level matters from the penalty spot on 81 minutes.

However, The Lilywhites won it five minutes from time when John Martin, who had only just been summoned from the bench, scored a delightful header with his first touch.

In what was a rather dismal first half, it took 14 minutes for either side to create an opening as Dundalk’s Steven Bradley curled a free-kick wide from the edge of the box.

The Scottish winger tried his luck again on 27 minutes, drilling wide on the half-volley.

It wasn’t until the 42nd minute that Shels threatened the Lilywhite rearguard, with Jack Moylan finding himself through on goal after latching onto a Farrell flicked header, but Darragh Leahy brilliantly raced across to block his attempt and keep the scores level.

Oriel Park sprang into life in first-half stoppage-time when Shane Griffin was given his marching orders by referee Paul McLaughlin for a second yellow card after the Shels defender had blatantly pulled the shirt of Bradley who was about to race into an attack.

After Shels manager Damien Duff was also sent off for his subsequent protestations, Patrick Hoban fired the resulting free-kick just wide of Brendan Clarke’s near post.

Duff watched on from the stands in the second half as Dundalk began to press, with Hoban’s header at the back post from a Lewis Macari cross crashing off the woodwork.

The visiting side should have had a penalty on 52 minutes when Moylan was nudged inside the area by Kelly, but referee McLaughlin waved away the strong Shels appeal.

Not long after an Aodh Dervin free stung the hands of Nathan Shepperd, Dundalk were also reduced to ten men when Bradley was given a straight red for kicking out at Farrell.

Oriel erupted on 64 minutes when from a Leahy pass-back, Paul Doyle sent a ball into the path of Kelly and he side-footed home from close range to give Dundalk the lead.

Kelly went from hero to villain nine minutes from time when he was adjudged to have fouled John Ross Wilson in the box before Farrell converted from 12 yards to make it 1-1.

However, Dundalk stole all three points in the 85th minute when Keith Ward floated a wonderful delivery which was brilliantly headed home by Martin with his first touch.