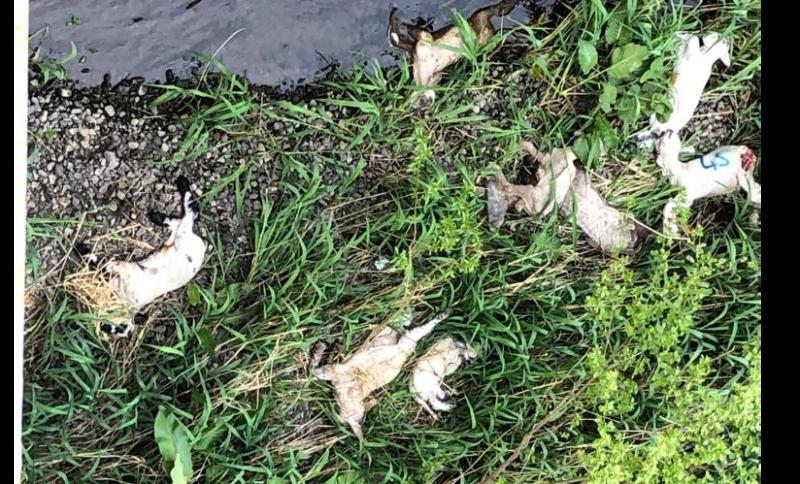 Grim discovery of dead lambs dumped over bridge near Dunleer

Sinn Féin Councillor Pearse McGeough said he was sickened by the latest dumping of dead lambs near Dunleer.

A passerby informed him of the grim discovery yesterday, Thursday afternoon, of at least ten dead lambs that had been unceremoniously dumped over the bridge onto land in the middle of the river, on the old Belfast / Dublin R132 Road, at Cappogue, near Dunleer.

At the scene Cllr McGeough said: “I am disgusted at this. No decent responsible farmer would carry out such an act.

"I have reported it to Louth County Council and the Inland Fisheries have been informed to rule out any contamination of the river.

"I have also talked to the Irish Farmers Association (IFA) for guidance.”

Cllr McGeough advised that “there are procedures in place for farmers to dispose of dead animals". "The Fallen Stock Scheme facilitates the collection and responsible disposal of dead stock.

“For anyone to dump their fallen stock like this is unacceptable and irresponsible not to say sickening and upsetting for the person discovering them.

"I will be pressing for an investigation into this dumping and I really hope that whoever is responsible is prosecuted to the full extent of the law.

“In the meantime I would appeal to anyone who saw anything over the bridge area along the River Dee on the R132 to please contact the authorities.

"The discovery was made on Thursday afternoon and based on the rate of decomposition, they would not have been there for very long, I would estimate anytime since the weekend.

"So anything suspicious that you may have noticed should be reported.”

In the meantime, authorities will remove the carcasses and dispose of them responsibly although according to Cllr McGeough, “that may prove difficult because of the location, they will be difficult to access.”

Patient forced to wait over two hours for an ambulance

Calls on people to respect area
ADVERTISEMENT - CONTINUE READING BELOW