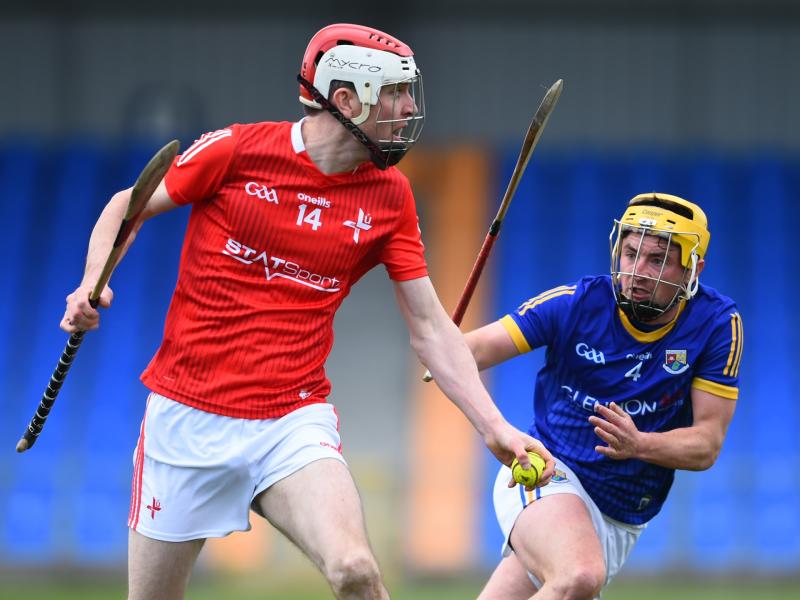 Andrew Mackin gets away from the clanngle of Longford's Enda Naughton

The Louth hurlers’s hopes of regaining the Lory Meagher Cup are now hanging by thread following another loss, this time on the road Longford.

The Boys in Red Looked to have everything going their way towards that vital victory, Longford looking in serious trouble after midfielder Evan Tully was sent-off after receiving a harsh red card in the 30th minute.

Louth really should have pushed on and made the extra man count, however the home side were very brave and battled back for a brilliant win to follow up their success over Lancashire in the previous round.

Trailing by a couple of points at the break (0-9 to 0-7), the revitalised Midlanders showed great intensity in producing a tremendous second half performance to beat Louth by the minimum of margins in a tense and exciting finish.

Rueben Murray broke through and was credited with the crucial Longford goal after he deflected the under-pressure clearance from Louth keeper Ruairi Morrissey into the back of the net in the 54th minute.

Moments later Joe O’Brien shot over the bar to leave Longford five points in front (1-12 to 0-10).  Louth were thrown a late lifeline with a goal direct from a long range Darren Geoghegan free in the 68th minute.

That left the sides deadlocked at 1-14 apiece. Sadly ill-discipline creeped into Louth’s game and ultimately proved costly as they were reduced to 14 players a minute later following a second yellow card for Niall Keenan.

The men in Blue and Gold finished the stronger with cracking points from Paddy Lynam (long range free) and Joe O’Brien to clinch a vital victory from a tie those in Louth camp will really feel they should have won in. It leaves them with a mountain to climb to reach the final next month.

Next up is a home game versus Cavan in two weeks’ time where anything but a decisive win means their championship prospects are over, before they finish the Lory Meagher group stages with an away tie against a decent Leitrim outfit.

The home side made a bright start to the contest with points from Cian Kavanagh and Joe O’Brien, but Louth gradually got on top to end up leading by 0-9 to 0-7 at the break.

The other Longford scores in the first half came from O’Brien (three frees), Lynam (‘65) and Kavanagh while their keeper Conor Gallagher made a couple of important saves to keep his net intact.

Five of the Louth points were fired over by Darren Geoghegan (three frees)  along with a brace apiece from Sean Kerrisk and Mark Gahan to leave the visitors with a narrow lead at the break.

The Mark Tully dismissal for a challenge on a Louth opponent was no more than a yellow card offence and this dubious decision looked to have swung the issue firmly in favour of the Wee County.

But Longford came storming back in the second half by adding another 1-9 to their tally with Joe O’Brien accounting for five of the points (two from play).

Three more from Paddy Lynam (two frees), along with a point from the goalscorer Reuben Murray, was enough for Longford to come out on top.

Geoghegan clocked up another 1-3 (three frees) as he made a welcome return to starting 15 having missed much of the league through injury.

His last point came in the fourth minute of stoppage time when it was too late to avoid defeat Louth having sadly long faded out of the game on the changeover in the face of fierce resistance from Longford.

The other Louth scores in the second half came from Niall Keenan, Feidhleim Joyce and Seaghan Conneely on afternoon to forget for Paul McCormack’s side.

They may have only lost by a point, but this will hurt just as bad as their defeat last weekend to Monaghan, and it will take a trojan effort from the Louth manager to lift his troops for the remainder of the competition. No doubt they will have plenty to ponder during their two-week break.