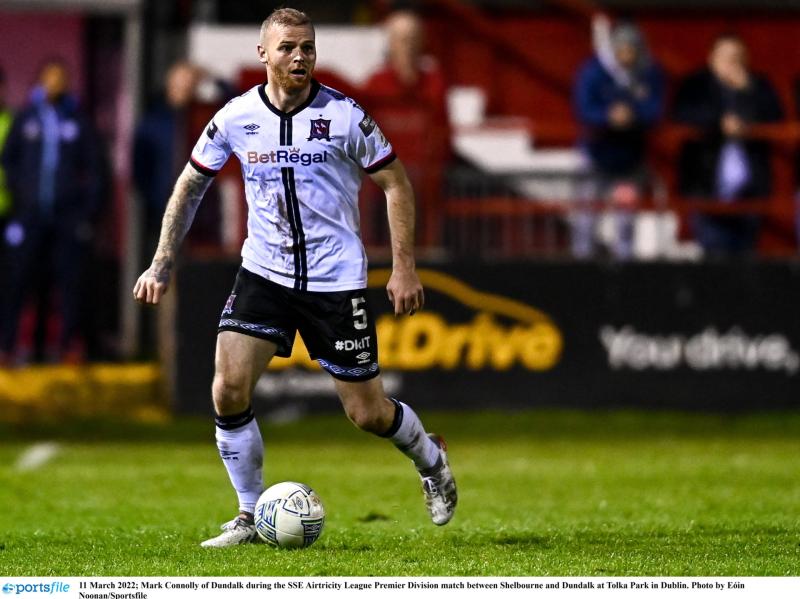 The Dundalk FC defender had a good view of Greg Sloggett’s tangle with Darragh Nugent inside the area before Hennessy pointed to the spot – although television replays suggested the Drogheda player had exaggerated his fall as there was little to no contact.

Connolly was among the Dundalk players to protest the Limerick ref’s call, but they fell on deaf ears, and Dean Williams stepped up to score the only goal of the Louth derby.

“A penalty is just giving them a chance to hold on to something,” Connolly told The Democrat afterwards. “We’re very disappointed. In real play when I was watching it, it’s a very, very easy penalty. It’s extremely disappointing. Even at the end there was four minutes added on. With all the substitutes, with the amount of injuries, everything?

“I don’t know, it’s just very frustrating and there’s not really much you can say about it.”

The 1-0 defeat in Drogheda was Dundalk’s first of the campaign, and with no fixture scheduled for this week due to the international break, Connolly is hoping The Lilywhites can get back on track when bottom-of-the-table UCD visit Oriel Park on Friday week.

“These are games that we want to be coming and winning. Unfortunately, like I said, they got the penalty, they’ve scored the penalty and they’ve something to hang on to which they done. They hung on to it.

Despite picking up only one win from their first seven games, Connolly insists there is no urgency to hit the panic button just yet, with the Clones native citing improvements in a back-four which hasn’t conceded a goal from open play in any of their last five outings.

“Not at all,” he responded when asked if the loss in Drogheda was a cause for concern.

“It’s just disappointing. We’ve conceded a penalty. Bohemians was the last time we conceded from open play, so it’s quite a few games and weeks since that.

“We’ve been solid as a team. Shels, penalty. Tonight, penalty. There’s no concern. We’re just very disappointed with a soft penalty and there’s not really much we can do.”