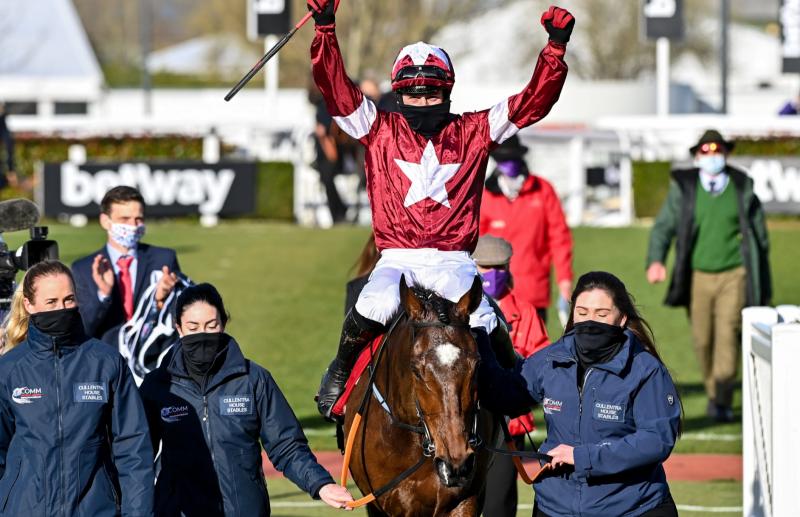 13:30 - Ballymore Novices Hurdle - Sir Gerhard (4/6) is my idea of the winner here but he is already odds-on so not the best bet for casual punters. A couple interesting at eachway prices are I AM MAXIMUS (18/1) for Nicky Henderson. He wasn't great on his hurdling debut but his second behind current Albert Bartlett favourite Hillcrest last time out makes him interesting here. He may well have been better in the Coral Cup but he can certainly run into a place here.

14:10 - Brown Advisory Novices Chase - This race lost some of its lustre when Galopin Des Champs was steered away from it and into the Turners Chase instead but it still has some interesting runners involved. BRAVEMANSGAME (9/4) should win this as he is trainer Paul Nicholls' idea of a Gold Cup horse over the next few years. This is the ideal prep for that as the race has produced numerous subsequent gold Cup winners, including Bobs Worth, Lord Windermere and Denman from Nicholls' own yard. Not much separates the Irish runners but Gaillard Du Mesnil and Beacon Edge should be staying on well to possibly grab a place. Capodanno is interesting for Willie Mullins and gave Bob Olinger a decent race recently but six-year-olds have a pretty poor record in this race.

14:50 - Coral Cup Handicap Hurdle - There is a lot to like about THE SHUNTER (10/1) in this for Emmett Mullins and jockey Mark Walsh. He is a fantastic dual campaigner and has won three of his last four runs over hurdles. However, it's his run in defeat behind Koshari at Punchestown last year that appeals to me. He gave weight to Ciel De Neige and finished just a half-length behind that one in third. The winner carried level weights with the Shunter off a mark of 143 and that one has gone out since and ran up to a mark just shy of 150. That makes The Shunter interesting to me here off 148 with a top joickey on board. Plus, he won the Plate at Cheltenham last year over fences so has course form too.

15:30 - Queen Mother Champion Chase - This is being billed as a match between Nicky Henderson's all-conquering Shishkin and Willie Mullins' Energumene who clashed in one of the races of the season at Kempton back in January. They went toe-to-toe and Energumene looked to be putting Shishkin to the sword but the 2021 Arkle winner was not to be denied and powered all the way to the line to win by a length. Shishkin is truly a class act and is most people's idea of the winner here but I'm going to give one of Willie Mullins' forgotten heroes a second chance. Backing Chacun Pour Soi requires a double dose of blind faith after he capitulated in last year's renewal of the same race won by Put The Kettle On, finishing third behind Henry De Bromhead's mare. I was concerned when he was beaten 34 lengths by Greaneteen at Sandown in December and there's a suggestion he just doesn't travel well because he's imperious on Irish soil. In the hands of Willie Mullins, he has only lost once on Irish soil and that was to last year's Gold Cup runner-up A Plus Tard at Leopardstown back in 2019. Mullins would not be taking him back to Cheltenham if he didn't think he was up to it and I know he has a massive soft spot for the horse, as do I.

He banished that defeat behind Greaneteen by beating the same rival by more than 70 lengths at Leopardstown in the Dublin Racing Festival. He beat Captain Guinness by 12 lengths that day, the same horse beaten 13 lengths by Shishkin in last year's Arkle. Greaneteen also got within ten lengths of Shishkin (giving the winner three pounds) at Kempton over Christmas. Lest we forget Chacun also beat Allaho (Patrick Mullins' Cheltenham nap of the week in the Ryanair) by five lengths at Punchestown at the end of last season.

I may be ridiculed for saying this but I don't think Shishkin is bulletproof and there is a bit of mystique still around Chacun Pour Soi. On his best form, he'd be contesting favouritism here but punters are holding his poor trips across the Irish Sea against him, possibly rightly so. It has to be a concern but at 6/1 against a 4/6 favourite, I'm happy to give him one more chance here.

16:10 - Glenfarclas Cross Country Chase - I think TIGER ROLL (7/4) is both a sentimental and sensible bet here for Gordon Elliott. The two-time Aintree Grand National winner, a five-time Cheltenham festival winner and a two-time winner of this race. He won it last year by a street and has been laid out for this again in what could be his last outing on a racetrack. I think he can sign off with another victory here.

16:50 - Grand Annual Challenge Cup Handicap Chase - An absolute puzzle where Poseidon, Embittered and Dancing On My Own are interesting for Ireland but in a race where I fail to have a storng opinion, I'm going for an each-way shout on the outsider of the field at 50/1. GLOBAL CITIZEN (50/1) runs off bottom weight here and isn't without a chance. He was a good chase back in 2020 when he was fourth in the Arkle at Cheltenham, running up to a rating of around 150. He went astray after that and had breathing issues, prompting a couple of wind operations but since his latest, he's put in two decent performances over hurdles. He was five lengths behind Tommy's Oscar at Haydock and 15 behind Goshen at Sandown but with some old sparkle back over fences, he's far from a no-hoper in this.

17:30 - Champion Bumper - This race always has plenty of hype horses and the one this year is Facile Vega, son of former Willie Mullins superstar Quevega. He could be very special but I've been taken by AMERICAN MIKE (5/2) for Gordon Elliott in the hands of jockey JJ Codd. Neither horse has done anything wrong in their two starts under rules. Perhaps American Mike's form has worked out marginally better but it is so hard to call this early in these horses' careers. He beat Battling Bessie and Liberty Dance last time out with the latter coming out subsequently and winning at Naas.