Louth Footballers secure another vital win away to Fermanagh 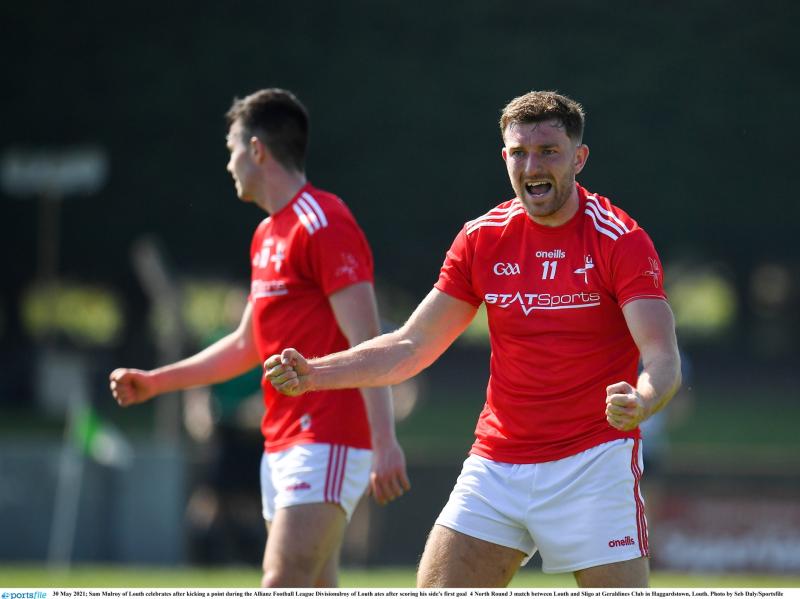 Louth are staring promotion in the face after overcoming yet another tricky test. This time the successful assignment was an away victory against in-form Fermanagh at Brewster Park in Enniskillen.

Winning is a habit Mickey Harte’s men just can’t shake at the moment as momentum is firmly with his Louth side as they now remarkably have promotion in their own hands.

Playing like a team you would have been envious of in the past, Harte is maximising the absolute most of the talent at his disposal. One it must be said, himself and Gavin Devlin have assembled over the winter.

They are now well-schooled and organised, with every drop wringed out in methodical displays of control and skill. All backed up with relentless work rate. The turn overs and amount of breaking ball won backing up what the naked eye saw.

Right from the word go, Louth identified that the best chance of a goal in the modern game is from the throw in and just like that, Tommy Durnin found the net after 20 odd seconds of play.

Not mentioned is the impact Liam Jackson had in the build-up and the hours of throw-in practice played out on the back fields in Darver. On Sunday, when it mattered most, the groundwork paid off and as a result, Louth and Durnin were instantly buoyed.

Jackson was soon on the scoresheet with a point and Bevan Duffy pounded over the O’Neill’s from way out on the right flank. Duffy yet again proved to be Louth’s Swiss army knife on the day by starting and starring in another position, this time right half back.

Durnin however was the fulcrum all afternoon in the delayed league game, originally due to take place on the Saturday evening before being moved to Sunday afternoon, winning primary possession and edging the battle with Erne captain Ryan Jones.

This allowed Louth to stall Fermanagh in gaining any sort of momentum they required to get back into the contest at source. The win wasn’t without its adversity though, first choice midfielder Conor Early had to leave the field after only seven minutes of action.

However The Wee County never flinched, with another cog in Daire McConnon coming into this well-oiled machine. Louth goalkeeper James Califf showed his true net minding credentials by being forced into a wonderful stop on his left-hand side to deny Garvan Jones a certain goal.

Fermanagh, undeterred, kicked three in a row, Darragh McGurn notching a brace, but just as it looked like the hosts would drag Louth into the mire the game swung again, this time in the visitors favour.

Pressuring the Fermanagh kick out was premeditated and when Cian Newman found his corner back Luke Flanagan inside the ‘D’, the referee correctly hopped the ball.

Sam Mulroy was quickest onto the crumbs Durnin fought Jones for. Through a mass of bodies Mulroy darted forward and found himself in front of goals. A quick solo bought him time and the finish was sublime. Louth had their cushion.

Two goals up, Durnin dominant and Louth thinking their way through the game with ease, Fermanagh looked doomed after 17 minutes.

To their credit, Kieran Donnelly’s men made Louth yearn for half time with four in a row. Mulroy would make it 2-5 to 0-7 with the last score of the half.

Seán Quigley came out all guns blazing at the start of the second period with a quick brace. Dan Corcoran was given that marking duty on the day and will be happy with his performance, keeping the in-form attacker to two measly points from play in both halves.

Louth knew that they were going to have to play percentages upon the resumption and this is where Dáire McConnon came to the fore. Backs to the wall and no easy out ball, the Ardee man in his first season really stood up as a useful outlet for Louth inside.

Coming in for Early, McConnon made the ball stick and allowed Louth to get up the field and take a welcome breather at the back. Quigley and Mulroy would duel with placed kicks before Ciarán Byrne came in for his now accustomed impact sub role.

A role he has now perfected so much so that he has possibly ruled himself out as a starter going forward. The Mochtas man’s own doing.  Full of running and endless confidence, Byrne clipped over the bar to ignite the winning push. Mulroy won and scored more frees.

Byrne added another before McConnon was rewarded for his impressive display with a point to put Louth six ahead. Quigley fired over the game's last two points in what the American’s deem Garbage time minutes. The game was over, Louth were in full control.

As perfect a performance as you would want for a side chasing promotion. An away victory, minus the last gasp anxiety, the perfect tonic for a side improving with every display. Destiny awaits in Ardee this Sunday.

Antrim took the spoils in Haggardstown last Summer when the sides last met. Can the Wee County rectify that defeat with the pressure of promotion to Division Two now hanging over them? Only time will.